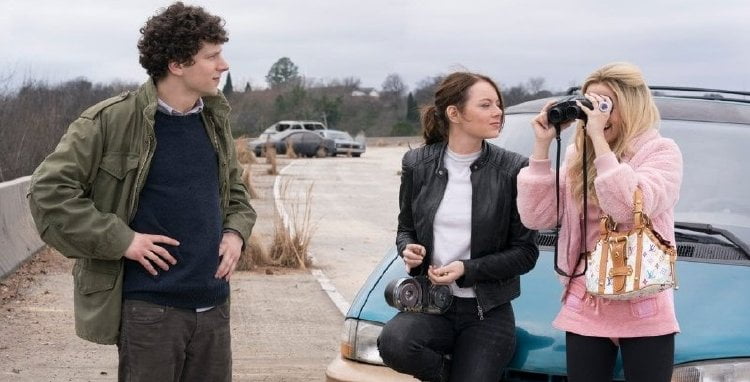 It’s as simple as this – if you enjoyed 2009’s “Zombieland,” you’ll enjoy its 2019 sequel in, perhaps even a little bit more than the first one. "Deadpool's" Rhett Reese & Paul Wernick and "The Expendables" franchise writer Dave Callaham favor characters over zombie mayhem even as they introduce new breeds, returning "Zombieland" director Ruben Fleischer using his action scenes to differentiate how this motley family responds to circumstance. Fleischer also smoothes out the dead spots that bogged down his original film while reining in the bloat of his prior climax.

As in the first one, it is Eisenberg’s narration that reintroduces us to his odiferous world. As we watch the foursome taking out walking dead in front of a decrepit and overgrown White House, we learn that Homers are dumb, Hawkings intelligent and Ninjas silent and swift. We also discover that Little Rock is yearning to leave the nest and find romance, Tallahassee’s father figure smothering her, just as Wichita panics when Columbus pops the question (complete with the Hope diamond). The confident male odd couple awakens to find a note, Tallahassee’s ‘beast’ gone along with the sisters.

A month later, Tallahassee is growing tired of Columbus’s broken heart as the two segway around a mall. He’ll be further taxed when Columbus comes across Madison in a scented candle store, the young woman’s enthusiastic ditziness giving rise to a plethora of ‘brains’ jokes. The morning after the young couple’s enthusiastic night of sexual release, though, who should return but Wichita, presumably looking to restock her weaponry to go out on the road to find Little Rock who’s taken off with pacifist musician Berkeley (Avan Jogia, 2019's "Shaft") for Graceland.

The script has set up all kinds of nice tension for these talented actors to riff on, scene stealer Deutch like a hand grenade thrown into the midst of the original cast. ‘Silicon Valley’s’ Middleditch does a nice Eisenberg impersonation, the two forming a competitive mutual admiration society as they compare Flagstaff’s ‘Commandments’ to Columbus’s Rules. Luke Wilson is less a match for Harrelson, who enjoys more friction with Nevada (Rosario Dawson), the sexy romantic interest he wasn’t looking for.

If you were expecting ‘more of the same,’ you will get that, but the filmmakers have taken care to add enough new elements to shake things up without losing what made the original work in the first place. ‘Murraying’ may be a new term for accidentally killing someone mistaken for a zombie, but stick around for a post credit flash back featuring the great man himself.