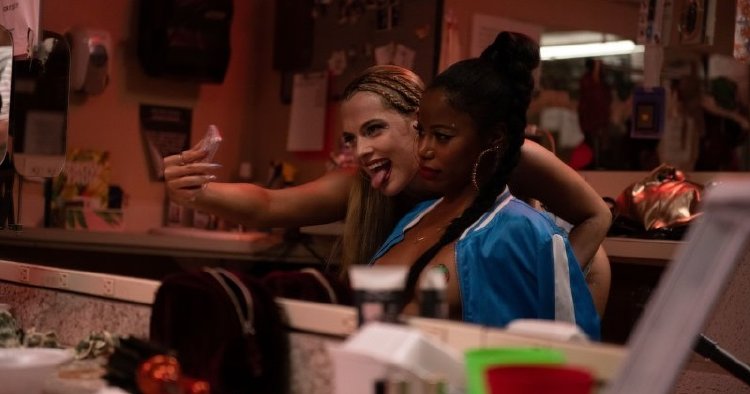 When A'Ziah King struck up a friendship with a young stripper while waitressing at a Detroit Hooters, she was invited on a weekend road trip to Tampa to pick up some quick cash dancing.  Except that’s not what happened.  King’s 148 tweet thread about her brush with sex trafficking and betrayal went viral and now it’s been given the big screen treatment in “Zola.”

A’Ziah’s twitter threat became an internet sensation not only for the wild story she told but the way in which she told it, her voice fresh, irreverent and funny.  So it is a huge disappointment that given her hand in writing the screenplay (along with playwright Jeremy O. Harris and director Janicza Bravo (“Lemon”)), Zola’s voice has been largely lost, the film losing its fizz after the initial rush of new friendship.  One wonders what a more seasoned director, like the Harmony Korine of “Spring Breakers,” might have brought to this project, because while Bravo’s visuals are stylish her narrative construction is lacking.  The film’s best elements are Riley Keough’s ("American Honey," "Logan Lucky") duplicitous Stefani, a white chick appropriating Black culture, and Mica Levi’s (“Under the Skin”) eccentric score featuring harp, xylophone and twitter alerts.

The film turns Zola (Taylour Paige, "Ma Rainey's Black Bottom") into a generic diner waitress which makes little sense, but it is there she meets Stefani dining with an older Black man, the cornrowed blonde enthusiastically complimenting Zola on her ‘titties,’ which look like ‘little apples.’  They exchange contact info and Zola’s surprised to be invited on a ‘hoe’ weekend so soon after meeting.  Her boyfriend Sean (Ari'el Stachel) is rightfully dubious about the whole idea but Zola’s attracted to both Stefani and the allure of easy money.

The first sign of trouble are their traveling companions, Stefani’s big, dumb gangly boyfriend Derrek (Nicholas Braun, HBO's 'Succession') relegated to the back seat with Zola while Stefani sits up front with her unnamed Nigerian ‘roomie’ (Colman Domingo, "Ma Rainey's Black Bottom") it will take Zola little time to figure out is her pimp, a fact Derrek has a much harder time absorbing.  The initial partying atmosphere inside the vehicle wears out its welcome before they hit the depressing Tampa motel room ‘X’ insists is merely a place to park Derrek while the girls work that night.

Bravo favors paneled mirror ‘split screen’ effects and dropping a series of images into the frame vertically and she makes use of the former as Zola considers the image she’d like to project on the pole that night.  But after making little money from the club’s meager audience, Zola is shocked to learn the selfies Stefani’s been taking backstage have been posted by X on Backpage and he threatens her as he drives them to a hotel room for ‘trapping.’  Zola, outraged, refuses to participate but falls for Stefani’s tears and fear, then takes over when she sees the woman pimping herself out for $150, increasing her rate to $500 with no decrease in customers (editor Joi McMillan (“Moonlight,” “Lemon”) will feature five different johns from the hotel door to the bed, then ‘treat’ us to an ugly montage of the male anatomy).  Stefani turns over the 8K she makes to X who throws Zola a cut but gives Stefani nothing.  Meanwhile, Derrek, who’s been trying to reach his girlfriend all night, has fallen in with Dion (Jason Mitchell, "Mudbound") and his naïveté will come back to bite them all.  A satiric ‘rebuttal’ from Stefani based on her real one on reddit reveals the racism at the heart of her character now projecting herself as a conservative Christian.