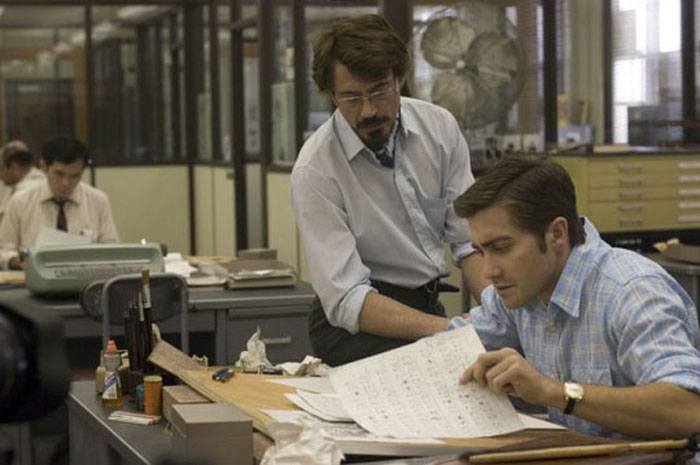 In 1969, one of the world's few self-named serial killers held San Francisco in the grip of fear while taunting newspapers and police with letters, cards and cryptograms. Crime reporter Paul Avery (Robert Downey Jr., "Fur: An Imaginary Portrait of Diane Arbus") became infamous over his reportage just as Homicide Inspector David Toschi (Mark Ruffalo, "Just Like Heaven") came under suspicion, but an unlikely colleague of Avery's, cartoonist Robert Graysmith (Jake Gyllenhaal, "Brokeback Mountain") became obsessed with the case and tried to solve the crimes by writing a book he called after "Zodiac."

It's been five long years since director David Fincher's ("Seven," "Panic Room") work has been on the big screen and what a welcome return. "Zodiac" uses the best elements of Fincher's previous work - the serial killer of "Seven," the puzzles of "The Game," the architecture of "Panic Room" - to service a mature investigative thriller with a distinct creep factor. Using signature period tunes with the mastery of Scorcese, Fincher opens with the couple who would become the first known Zodiac victims, driving out on a warm fourth of July to the strains of "Easy to be Hard." Soon after the murders, the editorial staff of the San Francisco Chronicle debate how to react to the demands of the killer made in a letter. Avery makes bold suppositions while Graysmith begins researching furiously on his own time. When a cabbie is killed right on the inner city streets and the killer slips through a massive police hunt, Toschi and his partner William Armstrong (Anthony Edwards, TV's "ER") get wrapped into the case. Toschi's young marriage takes a pummeling as does Armstrong's psyche. Avery sinks into addiction after the Zodiac personally targets him. Graysmith, who began wooing his now wife Melanie (Chloë Sevigny, "Shattered Glass," HBO's "Big Love") during the onset of the case, watches her and his kids move out as he continues to follow a trail thought to be cold. There have been myriad reports of Fincher's meticulous attention to detail while making this film, which originally clocked in at 3+ hours, and his own obsession has paid off. "Zodiac" is haunted by the unknown killer being hunted and even though his crimes are staged very early in the film, there is no way not to be unnerved still at its end. The fear of a city is captured in its central characters - Fincher shoots the broken Avery in a harsh white light that accentuates the shadow of himself that he now is and he has his own great "Silence of the Lambs" style moment staging a scene where Graysmith almost scares himself to death following his own clues. The large ensemble cast work well, from Ruffalo's terrifically lived in performance to the fine work of each and every actor cast as victim. Downey Jr. jazzes through the early goings with his hip flair for wit and although he may seem too current for the 70's, his downward spiral has the edge of experience. Gyllenhaal is the weakest link, a bit too earnestly naive for the man who persevered. Brian Cox, the original Hannibal Lecter in "Manhunter," is hilariously vain as celebrity attorney Melvin Belli, who tried to sidle up to the killer to further his fame. Character actor John Carroll Lynch ("The Good Girl," "Gothika") has a break out role as Arthur Leigh Allen, the suspect "Zodiac" the film believes in (and who died of a heart attack after being identified years later by one of his surviving victims even though he could never be physically linked to the crimes). Cinematographer Harris Savides ("Elephant") gives the film a beautiful bronze glow, particularly with his greenish apricot pre-dawn lighting. Production design takes us back to an earlier San Francisco without relying on the typical sites. When they are used, they're made unique by their employment - the Transamerica Pyramid building erected in fast forward as a time lapse device and historical marker, the Golden Gate Bridge from so high overhead and enshrouded in fog that the cars traversing it look in danger of falling into water. David Shire's ("The Conversation") score harks back to detective stories of its time yet is modern in its simplicity and Fincher's use of "Hurdy Gurdy Man" as the killer's theme is eerily effective. Fincher's film runs 2 hours and 45 minutes, but most won't even notice. In fact, it's the type of film that will demand a longer director's cut. "Zodiac" is a terrific exploration of obsession with the haunting residue of the unsolved just eluding grasp.

During the 1960’s and 70’s, a serial killer stalked the San Francisco Bay area. His modus operandi changed from murder to murder, baffling the police investigators trying to hunt him down. The killer, following each murder, taunted both police and reporters by sending letters and coded ciphers to them, making demands and declaring to be the “Zodiac.” David Fincher, who brought us the horrific “Se7en” and the compelling “Fight Club,” takes on the huge task of chronicling the murderous work of the Zodiac Killer and how this madman ruled the lives of both police and newspapermen tasked with catching him. Jake Gyllenhaal, Mark Ruffalo and Robert Downey, Jr. star as three of the people impacted by the Zodiac. Robert Graysmith (Gyllenhaal) is a cartoonist for the San Franciscan Chronicle who is made privy to a letter and cipher received by the paper from the killer. Paul Avery (Downey, Jr.) is the reporter from the paper assigned to the story. Inspector David Toschi (Ruffalo) is the cop put on the case to hunt down the Zodiac Killer. These men, and those around them also working the case, become possessed with their mission to find the elusive murderer. “Zodiac” shows the toll their obsession takes on each of their lives. Zodiac” runs 156 minutes but this epic proportion runtime feels scant. Fincher, working with a script by James Vanderbuilt adapted from the book, Zodiac, by Chronicle cartoonist Graysmith, had to do some serious editing to get the film down to the finished product. The result is a good film but one that is missing some pieces. In particular, Robert Downey, Jr. is not given full enough shrift as reporter Avery, who is most severely impacted by his years haunted by the elusive Zodiac. I believe the more fully developed Avery was left on the cutting room floor, making me hope that the “director’s cut” will restore the film to its original 3+ hour runtime and fill in the missing bits of story development. The film is, really, in two acts. Act one, the richest, covers the most ground as it presents the heinous crimes (done downright gracefully, without buckets of blood), the clues and ciphers of the taunting killer and the depths the cops and reporters go to try and find the serial killer. It is a frustrating, years long ordeal for the good guys and a maddening ball for the egocentric, I’m-smarter-than-the-police Zodiac. Fincher and company don’t take any liberties with the story, adhering to the source material and it is a fascinating one. The killings, investigations, screw ups and unfulfilling leads keep you glued to the screen. Act two, comprising the last hour of “Zodiac,” is about Robert Graysmith and his decade long, personal investigation to find the Zodiac Killer. It’s a shifting of gears for the film as it changes from crime thriller cat and mouse game (with Zodiac the cat) to a more thoughtful finale about Graysmith’s mission to find the notorious serial killer. All the bells and whistles we take for granted now – high speed computers and communications, resource sharing and the Internet were in their infancy – weren’t available in the 60’s and 70’s so evidence from one crime couldn’t be readily shared with other law enforcement agencies, allowing the Zodiac to repeatedly slip through the cops’ fingers. Zodiac” has an embarrassment of riches in its cast. From its three stars to the brief appearances of the victims, all of the characters are well developed. Joining Ruffalo, Gyllenhaal and Downey, Jr., is a who’s who list of character actors, including Anthony Edwards, Brian Cox (chewing scenery as the flamboyant attorney, Melvin Belli), Philip Baker Hall, Elias Koteas, Donal Logue, Chloe Sevigny and Dermot Mulroney. John Carroll Lynch is chilling as the prime suspect. It is a big film with a big, fine cast that almost has a complete story to work with. It is a shame that David Fincher gave in and cut Zodiac” down to its 2.5+ hours. If I invest that much time in a film, I want to see the complete work. Heck, after two and a half hours, I could have done another 30 or 40 minutes, easy. I hate to waste my time seeing what I know is an incomplete work. Good filmmaking and story telling, though.