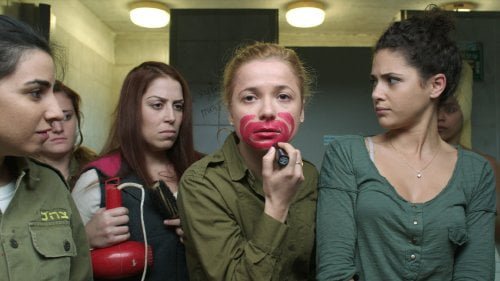 For a group of young women doing their mandatory service at a remote and arid Israeli army base, their life consists of counting down the minutes, hours and months until they return to their more comfortable civilian lives. Life there is boring and the ladies make the most of it, usually clobbering each other playing video games, but all have “Zero Motivation.”

For her feature film debut, writer/director Talya Lavie spins the boredom she experienced during her mandatory Israeli military service desk job into a three act comedy with some disturbing detours. In part one, 'The Replacement,' Daffi (Nelly Tagar) is so determined to be transferred from her remote outpost to Tel Aviv, she wills new recruit Irena (Tamara Klingon) into the role of her replacement as NCO of 'Paper and Shredding.' Her commanding officer Rama (Shani Klein), who dreams of a military career, is at her wits end with administrators who spend their days playing video games, singing pop songs and warring with staple guns. Things take a more dire turn when Tehila (Yonit Tobi) reacts to male rejection with brutal self mutilation. Part Two, 'The Virgin,'finds Daffi's best friend Zohar (Dana Ivgy, "Disengagement") bitter, feeling abandoned after Daffi's campaign actually worked. She's also determined to lose her virginity, but when things don't go as anticipated, help arrives from a most unexpected place. In Part Three, Daffi gets to experience life in Rama's shoes. Lavie's made a film from an unique perspective, one which illustrates how discrimination works against the system, undermining it by breeding contempt. But while the film certainly has comedic aspects, it's never as uproariously funny as it could (or should) be, Lavie instead reaching for something deeper and darker. It's an unusual, not entirely successful, approach, the lead characters never engendering as much sympathy as their frustrated leader or the misunderstood oddball. Grade:

First time feature writer-director Talya Lavie does a solid job with her army ensemble soap opera, told in three chapters, about the numbing routine the women draftees face day after day as citizen soldiers. The soldierettes are under the command of Captain Rama (Shani Klein) who sucks up to her fellow officers, all men, in hopes of making a career of the army. Her plans, though, are often thwarted by her troops who resent their jobs, such as NCO in charge of shredding documents, and the mundane daily grind they must endure. Some of them, though, cannot take the boring grind and lose it. The ladies help each other and they live a life that is more like a sorority house than an army base. The cast of unknowns all give their characters depth, garnering sympathy for their second class citizen status in the army. It is a man’s world and they just want to get their required service done. I felt their pain. After seeing “Zero Motivation,” I pondered over what other military ensemble films there are. The best I could come up with is “Stripes (1981),” starring Bill Murray and John Candy. That they are both ensemble army movies is about the only point of comparison for the two. “Zero Motivation,” while it does have moments of comedy, is serious drama about the grinding boredom of army life through the eyes of its femme conscripts.