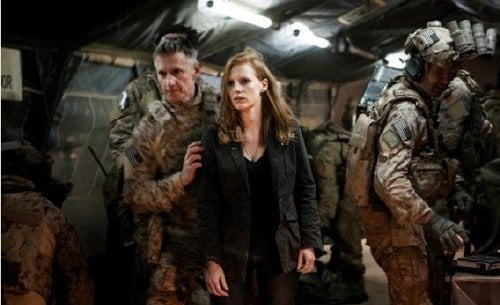 When the twin towers came down on 9/11, it sparked the greatest manhunt in history. For 10 years, Osama bin Laden had evaded capture despite the enormous efforts and expense of the US government. A young CIA recruit, Maya (Jessica Chastain), is assigned the task of finding bin Laden and dedicates her life to the near impossible mission that culminates in the S.E.A.L Team Six raid at “Zero Dark Thirty.”

When new CIA operative Maya (Jessica Chastain, "The Help") goes to her first job in the field, it's to a Black Site outside of Islamabad, where Ammar (Reda Kateb, "A Prophet") is being held prisoner, his arms chained over his head in the center of a bunker. Maya watches quietly as her superior, Dan (Jason Clarke, "Lawless"), begins the latest round of questioning delivered amidst waterboarding sessions. Back at the U.S. Embassy, when CIA station chief Joseph Bradley (Kyle Chandler, "Super 8") is asked about the youth of his latest recruit, he replies 'Washington says she's a killer,' and indeed, it will be Maya who will stay unrelentingly on the trail of Osama bin Laden for nearly ten years until a Navy Seal Unit is dispatched to take him out at "Zero Dark Thirty." "The Hurt Locker's" writing/directing team of Mark Boal and Kathryn Bigelow have been taking a lot of flak for their latest film, accused of everything from promoting torture to getting access to classified documents. But it's confounding to think that film has any other agenda than to lay out there, as realistically as possible, just what it took to hunt down the most wanted man in the world. As it turns out, it may have taken torture, but it also took plenty of detective work, hunches, human error, bribery, high tech tracking, agent loss and the determination of one woman who refused to let go of her conviction that a courier with the code name of Abu Ahmed was the key to everything. This is the name eventually given up by Ammar, notably during a round of good cop when he's been given something decent to eat and sitting outside with Dan and Maya. Maya knows that this name is generic, but believes that this is all he has (chillingly, when Maya asks Dan if Ammar will ever be released, she's told no, and we never do learn Ammar's fate). We learn little about Maya, but the rookie is bold as brass, contradicting a more senior operative's deduction at her first office meeting. Maya continually seems to correct Jessica (Jennifer Ehle, excellent, the warm-hearted human to Chastain's laser-focused enigma), the woman who comes closest to becoming a friend. We learn almost nothing about her nor does she seem to have any kind of personal life. In fact, it's rather shocking the way Bigelow and Boal casually drop mention that Maya was 'recruited out of high school' well into their film. She is defined by her doggedness and her lack of a political filter. At a DC meeting of the top echelon about what action to take with their most promising intel where she's invited to stay in the room, when she's asked to identify herself she does so by proclaiming 'I'm the MF who found the house.' As her Langley boss George (Mark Strong, "Sherlock Holmes") tries to get someone to take action, Maya keeps a day count on his door. The film is a procedural which flits back and forth between the Middle East and the U.S. Capital, counting off years studded with significant events like the 2005 London bombings and the Times Square car bomb. It's like "All the President's Men" with torture and explosions, but no mention of presidents (Obama is seen on TV in background, proclaiming that the U.S. does not use torture, the early events depicted having taken place under George W. Bush's watch). Maya's bosses are more interested in chasing the newer terrorist threats than following her lead - at one point she's even told Ahmed is dead - so she fights for resources (200K to buy an Arab a Lamborghini to get a phone number!). When the name of the man she's been hunting is uncovered, it's just been something that's been overlooked (and this is one of a couple of places the screenplay seems to bobble a bit, leap frogging us from one place to another without the connective tissue which has been its bread and butter). The film is at its most gripping once the decision has been made to go ahead with the raid on that fortress of a house in Abbotabad which may or may not house Bin Laden. The film's final forty minutes chart the mission of that Navy Seal Team, flying low in stealth copters to their target. And yet, even here, the approach is methodical. We are surprised by details, like the unlocked door found by one, or the stress of villagers approaching, drawn to the noise in the middle of the night. Room by room, the fortress is searched until there is only one place left to look. 'Osama, Osama' whisper the approaching Seals peering into darkness through night goggles. It's not the rousing end to a thriller. Instead it's eerie. And that hush extends to the aftermath, the shooter's realization of just whom he's shot, Maya opening the body bag back at the base, the positive identification sent across airwaves. "Zero Dark Thirty" is a compelling reenactment of an operation muddled by a myriad of complexities.

Director Kathryn Bigelow and second time collaborator, scribe Mark Boal, have been working on the hunt for bin Laden film for quite a while and, originally, their story was to be about the failure to capture the world’s most notorious terrorist. The events of 2 May 2011 would change the filmmakers’ story direction and show success instead of failure in the worldwide manhunt for the most wanted criminal in America. The makers of “Zero Dark Thirty” pull no punches and make no embellishment in telling this thought-provoking true life tale of a nation’s relentless revenge for an attack on its shores. Unlike the Hollywood-ized “Argo,” which took real events and hyped them up to heighten the excitement, the Bigelow opus is a straightforward telling of the nuts and bolts of the investigation, led by Maya (Jessica Chastain), and the tortures and questionable actions by those assigned to find bin Laden. The well-researched script by Boal gives a brutal honesty to the story as Maya, freshly arrived in Islamabad to take part in the interrogation of bin Laden’s nephew, is presented with the matter-of-fact torture, including the notorious water boarding, to find the whereabouts of bin Laden. There is nothing glamorous about what Maya must do to find – and kill – her carefully hidden prey. The film says that hard work, dedication to the mission and resolve is needed to see it through and is nicely represented by the young but pragmatic Maya – one of the thousands who contributed themselves to finding bin Laden. (She is talked about by her superior as “a real killer.”) Chastain moves to the short list for best actress consideration. The hunt for bin Laden is punctuated with depictions of terrorist attacks in Saudi Arabia (2004), London (2005), Islamabad (2007) and others as the investigators explore every avenue, often dead ends, to locate their target. The film builds steadily, but never tediously, to the long awaited mission to Abbottabad and the compound housing Osama bin Laden. The actual raid is shown, claustrophobically, and takes nearly as long as the real attack. The attention to detail is obvious and there is nothing Hollywood about this taut real life drama that is familiar to everyone. The slow, steady build of the story of the hunt is punctuated by the exciting, confusing and fascinating, and definitive, raid.