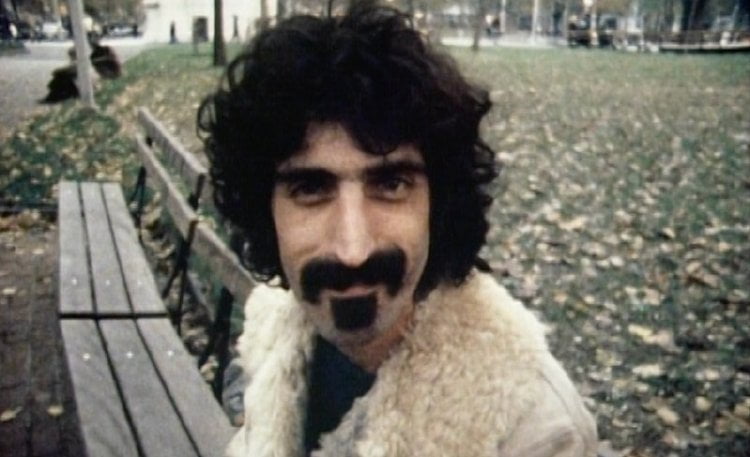 There is practically an entire wing in Frank Zappa’s Laurel Canyon home that holds his archives.  The man saved everything from home movies he made as a kid to recordings of live shows and basement jams, as well as the masters for his officially released albums.  When his widow, Gail, gave complete access to this material to writer/director Alex Winter (Bill of "Bill and Ted" fame, "Showbiz Kids"), the first thing he did was raise money to preserve it all.  Then he set to the task of making an intimate yet all-encompassing movie about “Zappa.”

Four years after "Eat That Question: Frank Zappa in His Own Words,” Alex Winter takes a much deeper dive, fleshing out the man, yes, in his own words, but also those of his widow and many of his collaborators.  Beginning with Zappa telling us about a childhood requiring gas masks because of the poisonous chemicals his dad worked with (the whole neighborhood around the plant required them) and how he learned how to make gunpowder by the age of six, Winter throws sunlight on the seeds of one revolutionary individual.  You don’t have to know anything at all about Frank Zappa going in to find this work thoroughly engaging.

Zappa famously didn’t do drugs while creating some pretty trippy music.  One of his biggest inspirations was Edgard Varèse, a composer he became interested in when reading a piece on Sam Goody which claimed he was a great salesman because he could ‘even’ sell this awful music.  He was also a perfectionist, a workaholic taskmaster who nonetheless was revered by most who worked for him despite much in the way of recognition (Ruth Underwood is thrilled to successfully play one of his modern classical pieces on piano and tears up discussing him).  He frequently states that he recorded music for himself and anyone else’s enjoyment was icing on the cake.  He also was never satisfied, happy if he achieved 70% of what he’d imagined.  In one of his wildest escapades, he hired the London Symphony Orchestra to record one of his classical pieces.

Zappa was also, of course, very political, not only through his music.  Winter opens his film with Zappa’s last recorded guitar performance in the Czech Republic, where he’d been invited to celebrate the withdrawal of Russian troops.  He was later asked to be their cultural and trade representative, something which American Republicans blocked.  His first real political awakening happened early in his career when he was set up on vice charges by businessmen objecting to his takeover of a Cucamonga, CA recording studio.

Winter also regales us with Zappa’s early rock days when he was considered the Pied Piper of Laurel Canyon.  And there are also the groupie days, which his wife Gail put up with while not being especially happy about them.  His eldest, daughter Moon Unit, had to slide a letter under his door to get his attention, their resulting time spent together producing his only hit, ‘Valley Girl.’  Later, he’d testify in D.C. when the likes of Tipper Gore were stumping for record ratings.  It was Zappa who came up with the solution that held them at bay.

There is such a wealth of material here, all unfurling both linearly and thematically.  Winter’s done a remarkable job clarifying the life of a very complex individual.  Respect, to both the filmmaker and his subject, is due.

I was never a real fan of Frank Zappa and the Mothers of Invention but always had a soft spot in my heart for the man and the rebel. Zappa always marched to his own tune, in more ways than one, and Alex Winter – yes, the “Bill & Ted” Alex Winter – delves, expertly, into the man, his life and his music in “Zappa.”

Winter was helped out, considerably, with the extensive access to Frank Zappa’s own personal archive. The result is, for someone knowing little about the man or his music, a richly documented work that, in Zappa’s own words, tells you his story. And, it is quite a story with a cast of thousands.

As I watched this well-done documentary that does all the things it is supposed to – educate, entertain and enlighten – I learned a great deal about Zappa, the music that influenced him and the music he influenced, like the Beatles.

You may not come away from “Zappa” a convert to his music but will, I think, come away with a whole lot of respect for the man who did not make music for money, but for himself.