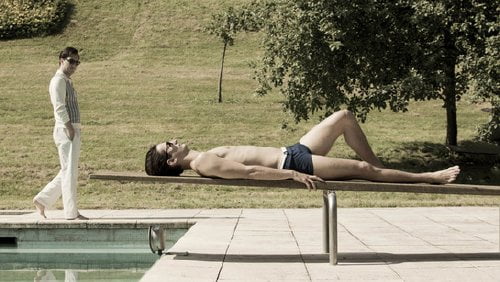 Yves Saint Laurent (Pierre Niney) was an icon in the haute couture world of fashion for decades. His long career, beginning as a designer for the house of Dior in the late 1950s, would change the look of designer clothes for women around the world. But, it was a turbulent life for “Yves Saint Laurent.”

In 1957, Yves Saint Laurent (Pierre Niney, "Romantics Anonymous") was a shy twenty year-old living a life of privilege in Oran, Algeria with his stylish mother Lucienne (Marianne Basler, "Midnight in Paris"), his first muse. Thrilled to obtain a job at the great Dior couture house, Saint Laurent would find himself named artistic director a mere year later after the great designer's death. He was a huge success, but a breakdown forced him out of the company. Luckily, he'd met the man who would be the love of his life and Pierre Bergé (Guillaume Gallienne, "The Concert") had the business acumen to shield the artist and help him found his own couture house, "Yves Saint Laurent." A remarkable decades long business relationship and tempestuous long term romantic one set against the world of high fashion from the late 50's through the 70's receives a shallow, cliched biopic treatment from cowriter (with Marie-Pierre Huster)/director Jalil Lespert. Niney is incredibly well matched physically to Saint Laurent but it is Gallienne who creates the more memorable character here, the man behind the throne who kept guiding his lover back from the precipice, his love never in doubt even as his tactics were sometimes Machiavellian. We see the young, tea totalling Saint Laurent devolve into a coke snorting hedonist, latching on to one muse after another, as Bergé pulls the strings from behind the curtain. And yet we get few indications as to what inspired the artistic drive behind the stunning clothing, an art book on Mondrian here, an exotically appointed estate in Morocco there. Even the great art collection built by the two which bookends the film is barely mentioned within its pages. Dior model Victoire Doutreleau (Charlotte Le Bon) becomes the first face of YSL, inspiring great jealousy in Bergé who breaks up the playful friendship in a shocking way, but at perhaps the right time for Yves to find new inspiration. That comes in the form of Betty Catroux (Marie de Villepin) Yves in female form, overlapping with Loulou de la Falaise (Laura Smet, "The Bridesmaid"), a model turned accessorizer. When Yves becomes infatuated with Jacques de Bascher (Xavier Lafitte), a boy toy of Karl Lagerfeld's (Nikolai Kinski, son of Klaus), Gallienne makes us feel Bergé's pain, even as he's assured that he is still the love of Yves's life (if not his most desired). But we never get a real sense of Saint Laurent's background, why he was drawn to fashion and how he got into Dior. What Lespert gives us is a checklist, studded with the occasional club outing (jazz), Saint Laurent's mental highs and lows (including bouts with drunkenness and an arrest for 'soliciting') and a few runway shows (scored to overly melodramatic opera selections). There is no sense of his clientele (Maria Callas is represented by music) or his place among his competition. "Yves Saint Laurent" works best as a look at how two very different people came together, Bergé enabling the fragile, temperamental artist by controlling and shielding him.

Knowing next to nothing about haute couture and fashion, I went into “Yves Saint Laurent” ignorant and with my eyes wide open. What I saw is a film that told the story of a man who rose in the exclusive fashion world to be arguably the most influential fashion designer in the world. Actor turned director and co-scribe Jalil Lespert explores Saint Laurent’s life and career for the years between 1958 and 1976, culminating in his spectacular collection inspired by the Ballets Russes and Vermeer’s painting, Woman with a Pearl Necklace. Saint Laurent’s story, as presented by Lespert, begins as he makes his first foray as a designer for House of Dior and is immediately recognized as a genius of fashion design. During those early years, his status as a top designer of haute couture steadily grew. As his fame and wealth increased, the formerly quiet, shy tea totaling young man who shunned drugs and alcohol, YSL makes the metamorphosis into a true hedonist, threatening his health and career because of his excesses. “Yves Sant Laurent” is told, partly via voice-over narration by Guillaume Gallienne as YSL’s long time companion and partner, Pierre Berge. Their life started off, at first, as casual friends, then lovers and business partners and grew into a fashion empire where they introduced the prêt-a-porter (ready-to-wear) fashion lines to the masses. The film also shows us the utter opulence of YSL’s life that could not soothe the inner turmoil and bouts with depression, drugs and alcohol and casual, and sometimes not so casual, sex with men. “YSL” does it best when it enters the frenzy of preparing for Saint Laurent’s near always well received runway shows. Early on in the film, a stunning model, YSL’s friend and muse, Victoire Doutreleau (Charlotte Le Bon), plays prominent in Saint Laurent’s life, to the point where he asks her to marry him. (They do not.) When they part ways after he fires her, other models come into his life to help center his designs. It took me a while to wrap my arms around Pierre Niney’s portrayal of YSL but his character grows, evolves and devolves during our journey through his life. Guillaume Gallienne, as Pierre, plays his character quite well and garners your sympathy. Charlotte Le Bron is terrific as Victoire and I was saddened when her character leaves. The rest of the cast is solid, too, but it is the story of the man and his fashion we are here to see. It prompted me to go on line to learn more about YSL.