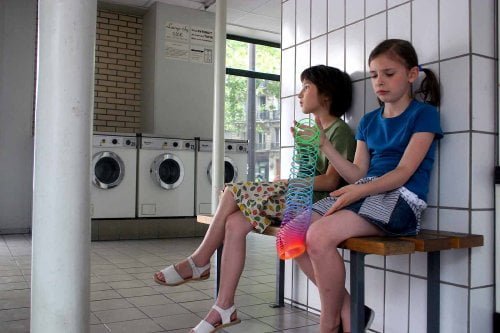 School's out and two best friends are plotting their Parisian escape by hitting up their moms to see who has the best plan. It's a double shock, therefore, when Jun (Tsuyu) tells her daughter that they're going to Japan and not just for vacation. Yuki's (Noë Sampy) parents are splitting up, something which has already happened to her best friend Nina (Arielle Moutel), but not with such geographical implications. After a brief falling out, Nina decides to run away to her father's and her best friend decides to go with her leaving three parents left behind frantically searching for "Yuki & Nina."

Actor Hippolyte Girardot, in his writing/directing debut with Nobuhiro Suwa ("Paris, je t'aime"), takes a familiar story and gives it a spin of magical realism in its third act. Unfortunately, neither Yuki nor Nina is all that terribly interesting. They're typical kids who do some typical kids stuff that give both Tsuyu and Girardot ("A Christmas Tale") himself (as Yuki's father Frédéric) something to react to. The film starts promisingly, as Yuki's grandfather (Jean-Paul Girardot) shows her how to paint sunlight into a landscape of trees, something cinematographer Josée Deshaies ("Before I Forget") mimics with the light which falls upon a sleeping Yuki in the back seat on the way home. A stand of trees will have magical powers later on. After this, Deshaies pretty much leaves her camera static for a series of extended takes between two, sometimes three actors with an occasional mid-scene cut to afford a different angle and, as fashioned by the directors, this can make for some slow going. Once the news has broken, Yuki and Nina cook up a letter from 'the love fairy' which they decorate with beads and baubles and send to Yuki's mother. Her reading it is one of the film's better scenes, the childish questions regarding divorce ('What will you cook?') becoming unbearably sad. Frédéric sits by her as they watch Jun leave for a two week foray to Japan - later Yuki finds her father dancing like a madman with a giant ball, apparently a little drunk, and he tries to explain how things will be OK. If only the inexperienced Sampy were a better actress (she has a tendency to lose focus during these long takes, Moutel is more assured), the scene might have sung but Girardot keeps it interesting. When the girls decide to run, there's a lot of running about - Nina returns to leave a note as a false trail and Girardot and Suwa make us watch her write the whole thing in real time. They evade Frédéric at the train stop and then walk and walk to Nina's father's house, the first of three increasingly fairy tale-like homes. Yuki's begun to have misgivings, but setting up a tent within the house becomes fun play. The house itself looks like an adult tree house, but there is no adult in residence. When they're spotted by a neighbor they make a run for it into the woods. Nina is convinced she can find a hut she knows there but they get lost. Nina decides on her own to 'go back,' but when she finally emerges from the deep dark woods, she's in the Japanese countryside where three young girls and a grandmother await. The film has its merits, but it's telling that it is more interesting to observe the divorcing parents than the titular girls at the film's center. The decision to move towards the fantastical via three fairy tale homes (Nina's 'hut' is the second) provides some late going interest and a springboard for a happy ending, but the friendship between Yuki & Nina never seems strong enough to withstand distance.