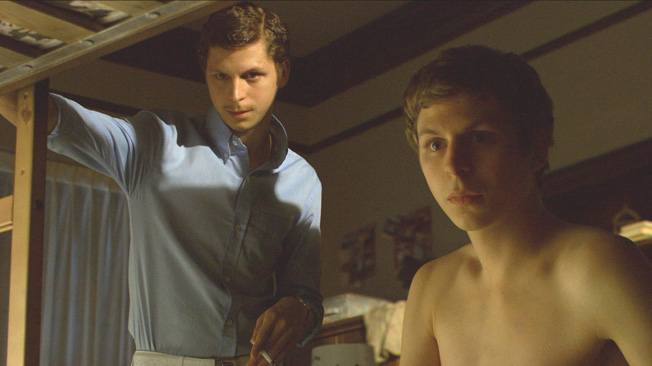 Nick Twisp (Michael Cera) is a bit more sophisticated than the average teen and loves the music of Frank Sinatra and the films of Federico Fellini. What is missing in his life, though, is love. That is until he meets Sheeni Saunders (Portia Doubleday), a pretty, free-spirited young woman. However, she lives over 200 miles away and Nick must figure out a way to change his life and get the girl in “Youth in Revolt.”

"Charlie Bartlett" screenwriter Gustin Nash adapts C.D. Payne's novel for helmer Miguel Arteta ("Chuck & Buck," " The Good Girl"), who directs a wacky multi-tiered cast comprised of two generations. Star Michael Cera ("Superbad ," "Year One") adds a new twist to his oeuvre of quietly wry sweet nerds when his character Nick Twisp busts out alter ego Francois Dillinger, an aviator-shaded, John Water's mustachioed, cigarette smoking, white shoe clad hipster modeled on the Jean Paul Belmondo of early Godard films. Nick is a child of divorce, living with his mother (Jean Smart, " Garden State," 24's Martha Logan), Estelle, a woman desperately trying to hang on to youth. She's dating the irritating and immature Jerry ( Zach Galifianakis, "The Hangover"), who takes the family to his 'summer camp.' Nick is less than thrilled about going and even less so when he gets a load of the camp, a broken down old trailer, but when he scopes out the area he meets Sheeni Saunders (Portia Doubleday), a smart and pretty girl who shares his love of foreign films and retro music. But their are obstacles in Nick's pursuit of Sheeni beginning with her parents ( M. Emmet Walsh, "Blood Simple" and Mary Kay Place, "It's Complicated"), so uber religious one entire wall of their deluxe trailer is covered in church organ pipes, and ending with her boyfriend Trent (Jonathan Bradford Wright, " Nick and Norah's Infinite Playlist"), a tall, handsome blonde athlete from Sheeni's exclusive prep school. Nick tries to remain close to Sheeni by moving in with dad George ( Steve Buscemi, "The Messenger"), who's also hooked up with someone much younger Lacey (Ari Graynor , disappointing after her terrific "Nick and Nora's Infinite Playlist" breakout). When Sheeni goes back to school, Nick engages his alter ego (much like Woody Allen's Bogart romance mentor in "Play It Again, Sam") in such showy criminal activities as sneaking into her bedroom with accomplice Vijay Joshi ( Adhir Kalyan, "Paul Blart: Mall Cop") and creating fiery traffic hazards on the streets of Berkeley, which don't go over well with mom's new cop boyfriend Lance Wescott (Ray Liotta , "Observe and Report," "Crossing Over"). The film has additional added quirks in the characters of Sheeni's pot smoking brother Paul (Justin Long, "He's Just Not That Into You," "Drag Me to Hell") and George's 'shroom tripping neighbor Mr. Ferguson (Fred Willard, "WALL·E"). It's fun to watch Cera put his own brand of hipster on and " Youth in Revolt" has a lot of funny moments, but Arteta's made an ungainly movie that ricochets around a lot and doesn't really add up to a whole lot. It's one of those movies that's fun while you're watching it but which eventually evaporates from the memory into the ether. The title promises rebellious subversion than the film delivers, much like the hesitance of resolve endemic in Francois Dillinger.

Based on the acclaimed 1993 novel by C.D. Payne, Youth in Revolt: The Journals of Nick Twisp, director Miguel Arteta and scripter Gustin Nash bring the source material to life with its good adaptation, fine acting by its eclectic cast and a funny arc with its boy-meets-girl-boy-loses-girl story. Michael Cera does his usual virginal nerd as Nick Twisp, stammering his way through a life he desperately wants to change. It works, though, as we find that he lives with his trailer trash mom, Estelle (Jean Smart), and her crude and rude boyfriend, Jerry (played with vulgar zeal by Zach Galifianakis). They would drive anyone to become a bumbling dweeb. Things lighten up for the teen when the family goes on a lakefront vacation and he meets Sheeni. He knows that she is the one for him, but there is hitch. She already has an older, handsome boyfriend named Trent (Jonathan Bradford Wright). How can someone named Twisp compete with a guy named Trent? Put upon from all sides, Nick comes up with a plan to break out of his personal hell. He invents an alter ego – Francois Dillinger. Francois is everything that Nick is not: cool, suave and experienced in the ways of women. With his carefully trimmed mustache and ever-present cigarette at hand, he advises the forlorn Nick to live on the edge and make a name for himself. This advice inspires Nick to acts of derring-do but the results are catastrophic and include doing $5 million damage to the town. He does make a name but it is as a fugitive from justice. Helmer Arteta creates a funny, fast-paced coming of age story that benefits from its great cast. Both newcomers and veteran cast members, including Smart, Galifianakis, Steve Buscemi, Fred Willard, Ray Liotta, M. Emmet Walsh, Mary Kay Place and Justin Long, surround Cera in his dual role as nerdy Nick and fabulous Francois. Portia Doubleday is pretty and smart as the desirable Sheeni and Adhir Kalyan makes a splash as Nick’s only buddy, Vijay. Coming of age movies are a dime a dozen, so it is refreshing when the genre gets a new invention, as it does with “Youth in Revolt.”