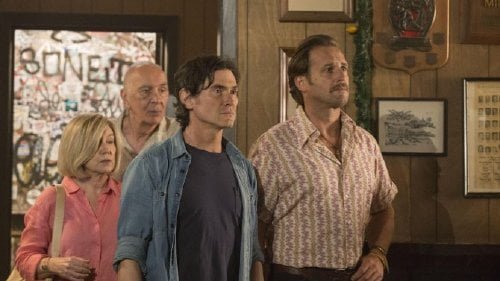 Raymond Engersol (Frank Langella) is fast approaching his 80th birthday and learns, from his doctor, that he needs heart surgery or he will die. Without discussing it with his family, he decides to trek to Oregon, where assisted suicide is legal, to end it all. His family, though, does not take this decision to heart. This begins a journey that will change the Engersol’s in profound ways in “Youth in Oregon.”

Raymond Engersol (Frank Langella) and his wife Estelle (Mary Kay Place) have moved into his daughter Kate's (Christina Applegate) house while he recovers from the open heart surgery he had following a heart attack. When his doctor informs him he'll have to have more surgery, Raymond announces to his family during his 80th birthday celebration that he no longer wishes to live and will go to Oregon for assisted suicide in "Youth in Oregon." This family comedy from director Joel David Moore gets by on the talents of its cast and a few humorous moments from writer Andrew Eisen, but on the whole it's weak tea, having been done before and better (see last year's "Last Cab to Darwin" for just one example). There is no surprise as to where this one is heading other than the jolt of a late breaking marital miscommunication that stretches credulity. Kate is beside herself with her father's news while Estelle seems to take it in deadpan stride. Raymond's daughter insists that her husband Brian (Billy Crudup) drive him, buying the family time to talk dad out of his decision. Brian's already had enough of his in-law, but the odd couple set off, Kate's plan that they include an unannounced visit to brother Danny (Josh Lucas), estranged from his father, to shore up opposition. Frank Langella has been enjoying a late career resurgence and his Raymond is a surface curmudgeon who stops to enjoy the roses when no one's looking (these quiet scenes are among the best in the film). Mary Kay Place's resigned sarcasm and Crudup's exasperated comebacks buoy the film to its final destination. But this divided family's problems are resolved all too easily, Raymond's crisis an overblown catalyst. Grade:

Ray’s decision is not taken well by his family, especially his daughter, Kate (Christina Applegate), who digs her heals in against the idea. His pragmatic wife, Estelle (Mary Kay Place), is used to her husband’s ways and insists on going along for the country-crossing ride. Kate refuses to allow a stranger to do the driving, which was Ray’s plan, and volunteers the services of her husband, Brian (Billy Crudup), much against his will. Kate’s plan is that Brian will make Ray see reason and come back home. Third-time feature director Joel David Moore and first-time scripter Andrew Eisen come up with a routine melodrama about a man, nearing the end of his long life, who decides to take control of that end. Ray’s decision, which is solely his, is not the personal choice he thinks. The family, even Estelle who knows Ray so well, is not going to let it happen as they, over the course of the road trip, work hard to change his mind. Events that transpire once they reach Oregon will, though, change them all. The caliber of the cast helps make “Youth in Oregon” a cut above what the been-there-before story deserves, although none stands out in this family drama and road trip. The road trip part does have its comic elements of family in close quarters for an extended time, tempering the somber subject of death.