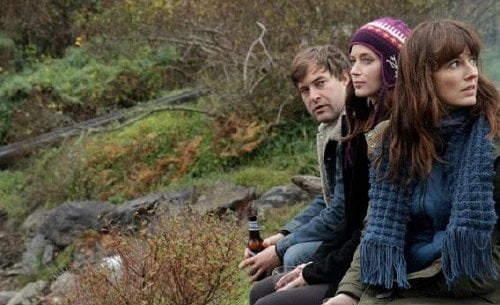 When Jack (Mark Duplass, "Humpday") indulges in a little too much honesty at an informal gathering marking the anniversary of his brother Tom's death, Tom's ex-girlfriend Iris (Emily Blunt, "Salmon Fishing in the Yemen"), who happens to be Jack's best friend, offers him her secluded family cabin off the coast of Seattle for some contemplation time. But when Jack arrives, he finds Iris's older sister Hannah (Rosemarie DeWitt, "Rachel Getting Married") there finding solace over the breakup of a 7 year relationship with her girlfriend Pam in the bottom of a tequila bottle. These two end up in bed and when Iris arrives unexpectedly the next morning, Jack's in a panic, feeling just like he's slept with "Your Sister's Sister." I really disliked writer/director Lynn Shelton's last film, "Humpday," and was surprised to see how many of the same notes she hits here - two men and a women turn into two women and a man and there is a sexual situation involving going against one's natural predilection that causes hurt with the third and a reassessment of relationships. But "Your Sister's Sister" is a better movie because it doesn't ring false. Shelton combines a mixture of script and improvisation this time around and her three stars get into actors' workshop mode. Oddly, it's the least experienced of the three, Duplass, who makes the strongest impression. Blunt's British accent is never explained as it waivers in and out and Shelton's many shots of the two sisters in close proximity only emphasizes the complete lack of physical characteristics between the two actresses. Still, it's a pleasure to watch these three navigate complex emotional territory even though the final destination is never in question.