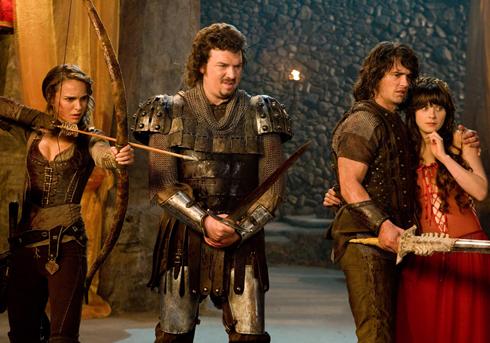 Fabious (James Franco, "Pineapple Express," "127 Hours") is a brave and dashing Prince whose latest quest has won him fiancee Belladonna (Zooey Deschanel, "500 Days of Summer"). His wastrel brother Thadeous (Danny McBride, "Pineapple Express," HBO's "Eastbound and Down"), Whom Fabious adores, neglects his duties as Best Man and the wedding is plundered of its bride by the Evil Wizard Leezar (Justin Theroux, "Zoolander," "Inland Empire"). The King (Charles Dance, "Gosford Park") decrees that Thadeous will accompany his brother in the quest to save her or never again be called "Your Highness."

Director David Gordon Green began his career as an indie darling with films like "George Washington" and "All the Real Girls," which costarred Deschanel and Green's buddy Danny McBride. When Green hooked up with Judd Apatow and came in from left field with "Pineapple Express," it was a pleasant surprise. Now he's indulging old friend McBride, who cowrote this mess with Ben Best ("The Foot Fist Way"), and the results are decidedly unpleasant. Only the goofily likable Franco and the over the top Theroux provide anything in the way of entertainment in a film seemingly designed to appeal only to those who revel in penis, midget and homophobia jokes. What the hell were Natalie Portman (as warrior Isobel) and Damian Lewis ("Keane," as traitorous knight Boremont) thinking? Portman gets a Minotaur penis shoved in her face and is obligated to make out with the movie's star. The film barely even explores the stoner aspects alluded to in its title, with the exception of Franco's natural expression. Special effects are lazy, the story is lame and the humor is of the lowest brow.