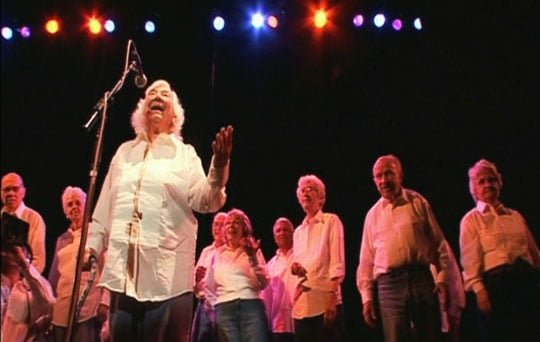 A British docu crew, led by helmer Stephen Walker, come to America to chronicle another season of an octogenarian choral group so popular they have sold out concerts and toured Europe. Their youthful music director, Bob Sillman (at the ripe old age of 53), challenges their prior use of show tunes and standards with an infusion of punk, rock and blues songs that make this gang of old folk feel and be “Young@Heart.”

The film pulls you in from its opening frame - a gaping mouth, not unlike the Rolling Stones' "Sticky Fingers" logo except one that's seen even more years than those aging rockers' - is emitting a ragged caterwaul. The camera pulls back to reveal 92 year-old Eileen Hall, one of a white-shirted, black-panted chorale group who proceeds to ask quite practically 'Darling, you've got to let me know - should I stay or should I go?' So, now that British director Stephen Walker (“Hiroshima – A Day That Shook The World”) has assured our attention with this bracing senior version of The Clash, he lays his groundwork. Young@Heart are a singing group from Northampton, Massachusetts and their director, the fifty-something Bob Cilman, has agreed to let Walker document the seven weeks of a live show's creation, one they are preparing for their own home town. Cilman himself is a marvel, choosing eclectic songs for the group he has shepherded since the early 80's. Sonic Youth's “Schizophrenia” isn't initially received well by the oldsters, but the group master it. Much more difficult is getting Stan Goldman to remember his two solo lines of James Brown's "I Feel Good" and get him in sink with mother of fifteen and clotheshorse Dora Morrow's opening howl. Walker balances the rehearsals with 'getting to know you' asides, such as a visit to the flirtatious Hall and Steve Martin, a speed freak who drives 130 mph and whose home contains a 'Still a Sexy Beast' doll from his girlfriend. Speaking of speed freaks, Walker gets his camera moving via a ride with heavy-footed Lenny, who carpools members to rehearsal (and duets with Joe Benoit on the Talking Heads's "Life During Wartime") and through the windows of the group's bus. We also get to know two retired members of the chorus who are returning to join up on Coldplay's "Fix You." Sadly, one of them, Bob Salvini, dies suddenly. His partner Fred Knittle, attached to an oxygen machine because of congestive heart failure, soldiers on and sings the song solo and will move you to tears (he's also one of the group's most melodic singers and quite a cut up). A week before the final show, another current core member, featured dead center on the show's advertising poster, passes away within a week of Salvini and the group and its director are rattled, as are we. The show must go on, however. Walker and his gang also created four music videos with the group that are interspersed here - watch for Stan's way-out 'Angel...' top note in David Bowie's "Golden Years" - inspired staging. Cilman gets mileage out of assigning songs that address the effects of aging, and so Knittle stars in "Stayin' Alive" and the group wows inmates of the Hampshire County Jail with their rendition of "Forever Young." "Young@Heart" is such a hilarious, moving and uplifting piece of work the only thing left to do after seeing it is to start campaigning the Academy of Motion Picture Arts and Sciences's documentary arm to change their rules - the film will not be eligible for Academy consideration this year because it aired on BBC TV in Great Britain.