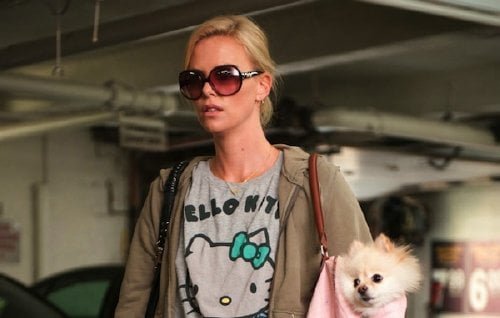 Mavis Gary (Charlize Theron, "Monster," "The Road") is avoiding a writing deadline and drinking too much when she receives a pictorial email birth announcement for the baby daughter of her old high school boyfriend Buddy Slade (Patrick Wilson, "Little Children," "Insidious"). This gives her a mission - to return to Mercury, Minnesota and her high school glory days by taking him back, parading as the celebrated big city author of a popular series of "Young Adult."

From the writer (Diablo Cody) and director (Jason Reitman) of "Juno" comes a character study of a deluded young woman with no redeeming qualities who returns to her home town only to ultimately discover pity where she expected envy would be. Charlize Theron deserves respect and perhaps even a nomination for somehow maintaining a shred of sympathy, if not dignity, for Mavis and it is a relief that screenwriter Cody has dispensed with her contrived snark speak even if she can't seem to leave high school. "Young Adult" is the 'watching a train wreck' type of black comedy that sinks or swims on its locomotive and Theron keeps it afloat with a whole lot of heavy lifting. Mercury is a town of globalized corporate America, all chain store strip malls and plastic sports bars. Mavis clearly hates the place, but also takes every opportunity to belittle its denizens, including the object of her mission, who refer to Minneapolis as 'the mini apple.' In one of the film's funniest scenes, Mavis expresses her disdain as she checks into her motel in clear possession of a dog which she denies (the character's abusive neglect of her adorable Pomeranian, Dolce, presumably as in '& Gabbana' vs. 'La Vita," is a choice bit of criticism for those who use their pets as accessories). "Martha Marcy May Marlene's" Louisa Krause is hilarious cameoing as the front desk clerk. Mavis is like a heat-seeking missile where Buddy is concerned, but it is soon apparent that what she really wants is to return to her glory days as a big fish in a small pond, the larger pond of Minneapolis having all but drowned her. Each possible encounter with Buddy is preceded by a mani-pedi and the hunt for a new outfit that will perfectly express the image she wants to project. (Her fashion sense engages a Macy's clerk (Elizabeth Ward Land) until Mavis states that she's looking to provoke the old flame's wife and not the old flame.) But on her first night, vamped out to the max at a local gin joint, it's not Buddy she meets but Matt Freehauf (Patton Oswalt, "Big Fan"), the boy whose locker abutted hers and who she finally recognizes as 'the hate crime guy,' Matt having been beaten so severely after mistakenly being thought gay that he has problems walking still. Matt is horrified when the alcoholic Mavis, in her cups, admits her goal, but he becomes her confidant nonetheless, especially when she discovers his home bourbon brew and the idolization of his sister Sandra (Collette Wolfe, "Hot Tub Time Machine"), the only one in town still in thrall to her myth. "Young Adult" succeeds mostly because of Charlize Theron really gets what makes this kind of lost 'It' girl (think Dianna Agron's Quinn Fabray in 'Glee') tick and the way Reitman observes her self preoccupation, but when all is said and done the story's pretty slight. It is hard to believe Matt would have anything to do with this woman and, with the exception of Elizabeth Reaser's ("The Twilight Saga") Beth Slade, the wife who turn out to be a pretty interesting individual, no one in Mercury is anything more than a type. Mavis's own parents (Jill Eikenberry, TV's 'L.A. Law' and Richard Bekins of "Limitless") are hand-wringing enablers, Buddy's mom (Mary Beth Hurt, "The Dead Girl") and Beth's friend Mary Ellen (Kate Nowlin, "The Mighty Macs") are disapproving, etc. Buddy himself is an oblivious blank slate, a 'good guy' seemingly devoid of personality. "Young Adult" can be viewed as celebrity posturing in the face of oncoming obscurity (the YA series Mavis ghost writes for is heading for the remainders bin), a desperate bid for fame as it slips away. Theron is often hilarious in her utter single-mindedness, but she retreats aloft on the same hot air she rode in on. If this is Cody's statement on Hollywood phoniness, she's said nothing to counter it except that decency is boring.