You Won’t Be Alone 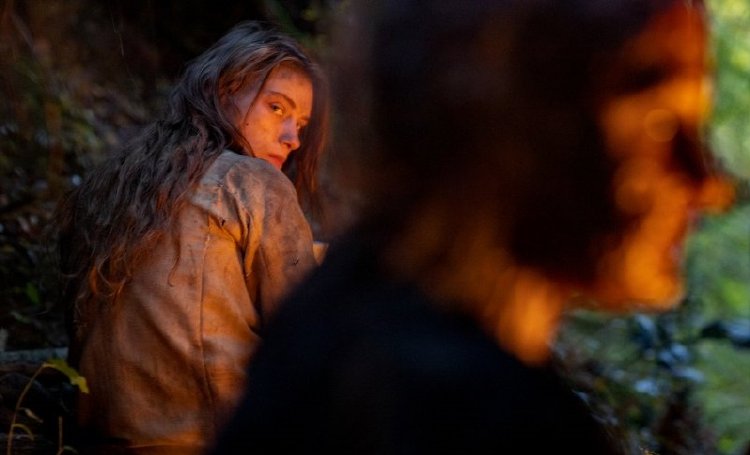 As sheep graze on a hillside in 19th century Macedonia, a cat walks determinedly in the foreground.  But that cat is not a cat and Yoana (Kamka Tocinovski), a peasant farmer, is horrified to find the horrifically burned 200 year-old witch Old Maid Maria (Anamaria Marinca, “4 Months, 3 Weeks and 2 Days”) standing by the crib of her newborn daughter. Yoana pleads with Maria, stating she will hand the child over when she is sixteen.  The deal is struck but the witch takes the baby’s tongue and her mother’s attempt to hide the child steals her daughter’s childhood in “You Won’t Be Alone.”

Macedonian writer/director Goran Stolevski’s feature debut is, on its surface, a folk horror tale, but he’s used the genre creatively as a cyclical exploration of the experience of being human in all of its extremes.  As Nevena (Sara Klimoska), the young girl Maria converts to one of her kind with a ‘witch’s spit,’ will note throughout, ‘This world is a biting, wrenching thing…and yet.’

After Maria swipes baby Nevena’s tongue out of her mouth with one of her long black claws, a sobbing Yoana carries her to a cave where she hopes to keep the child hidden, then runs back into her village screaming that the Wolf-Eateress has snatched her baby.  She visits her daughter, who grows up feral, Klimoska narrating her thoughts in broken yet oddly poetic fragments.   When a black kite flies in, we can deduce who it is and when Yoana disappears behind a boulder in chase, the Yoana who reappears is a different creature who coldly orders Nevena outside.  The young woman, stumbling and blinking in the sun, follows the mother figure that drops handfuls of intestines and guts as she walks, eventually turning to reveal her true self, Maria.

This ritual, in which the witch opens a gaping hole in her chest where she’s been marked by another’s claws and stuff the guts of another creature in to assume its shape, will be one learned by Nevena, whose natural curiosity and engagement with the world gets under Maria’s bitter skin.  After the old witch kills the second animal Nevena has engaged with, the young girl throws a rock at her and Nevena abandons her, calling her useless, regretting her one-time use of the witch’s spit on the girl, clearly anticipating Nevena’s quick demise among humans.

Nevena will hold back at first, observing such things as a woman giving birth on the edge of a field (she will look up her own skirts in confusion).  Ready to experience their type of life, she kills Bosilka (Noomi Rapace, "Lamb"), but her assumption of the young woman’s body causes confusion to both herself (she sticks out and holds her tongue, a new sensation) and others, who fear she’s been possessed.  In this first iteration, the mute Nevena learns that woman shouldn’t open their mouths when men are in the room, but always do amongst women.  She is taught to be subservient to a husband who slaps her, but Bosilka's Mother-in-Law (Jasmina Avramovic) takes her under her wing, showing her kindness and compassion.

After a bloody rebellion against her patriarchic imprisonment, Nevena drops Bosilka and briefly becomes a dog to observe men amongst themselves, then takes on the good looking Boris (Carloto Cotta, "Tabu," "Diamantino"), through whom she will learn sexual pleasure.  When he is called by a group of panicked little girls to save one of their own who has fallen and finds Biliana (Anastasija Karanovich) dead, Nevena’s learned compassion and lost childhood cause her to take on the mantle of this young girl.  It is as Biliana that Nevena not only gets to experience what was robbed from her, growing up alongside the young boy who will become her husband, Yovan (Félix Maritaud, "BPM (Beats Per Minute)"), but learns what was robbed from Maria as well, the witch’s horrible tale told as legend to young children.  But the happier Biliana (Alice Englert, "Beautiful Creatures") becomes, the more vengeful the ever-watchful Maria does.

Although his film is filled with hardships, abuses and death, Stolevski keeps his two main characters sympathetic, Nevena through her hopeful striving, Maria through her pitiable past.  Cinematographer Matthew Chuang (“Blue Bayou”) celebrates the natural beauty the tale is set in, his camera at turns in observational long shot and intimate close up, like the shy smiles exchanged by Biliana and Yovan on their wedding day.  While the film is reminiscent of others like “November” and “Hagazussa,” “You Won’t Be Alone” is a unique tale of a supernatural mentor and the protégé who accomplishes what she could not, one which Stolevski ends masterfully and which will reward repeat viewings.

Focus Features releases "You Won’t Be Alone" in theaters on 4/1/22.