You Will Be My Son 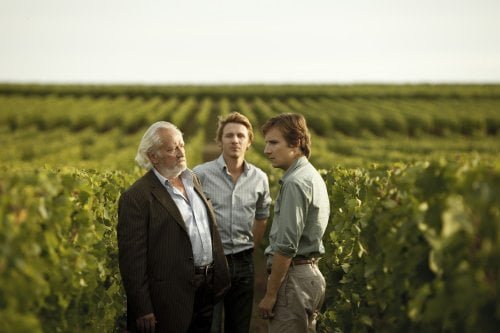 When presented with his father's coffin and told that it is French Oak, Martin de Marseul (Lorànt Deutsch, "The Day of the Crows") smiles as he notes that the vintner didn't like woody aromas. Paul de Marseul (Niels Arestrup, "A Prophet," "War Horse") loved wine and took every opportunity to belittle the child whose mother died in childbirth and who fails to meet his father's testosterone-fueled standards. With the vineyard's operations manager, François Amelot (Patrick Chesnais, "The Diving Bell and the Butterfly"), failing rapidly with cancer, Martin believes he can pick up the slack, but when Philippe Amelot (Nicolas Bridet, "Regular Lovers") arrives newly jobless from Copolla's California vineyards, Paul decides "You Will Be My Son."

Cowriter (with Delphine de Vigan)/director Gilles Legrand (producer of "Ridicule," "Micmacs") has created a criss-crossing and parallel father son story with a gruff, larger-than-life performance from the great Arestrup and a highly satisfying unexpected climactic development that's weakened by the extreme difference between de Marseul pere and fils. Where Arestrup is strapping, hirsute and growling, Deutsch is slight, hairless and high pitched and the unrelenting disdain from father for son becomes outrageous despite the knowledge that such paternal animosity exists. This is melodrama dialed up to 11. What keeps us with the film, besides Arestrup and the spiky performance of Anne Marivin ("Tell No One," "Little White Lies") as his daughter-in-law Alice is the intriguing four-way configuration of the pair of fathers and sons. (A third generation comes into play when we hear an amusingly unsavory story about the demise of Paul's own dad.) While Paul has no use for his, his right-hand man has been mentoring Martin and doesn't approve of his own son's cozying up to his boss. Chesnais paints a very sympathetic character with unknown reserves. Amelot's wife Madeleine (Valérie Mairesse) is a lion when de Marseul drops by to force medically forbidden drink and work on her husband, but a lamb when she sniffs out potential riches for her son. The best sparks fly when de Marseul crosses paths with Alice, who makes no bones about her utter disregard for him and whom he considers his son's best asset. Deutsch, who filmography is heavy in animation voice performances, is just too dweeby to create a rousing interest. The vineyard environment gives cinematographer Yves Angelo some stunning backdrops and the dialogue is laced with the kind of outlandish descriptions of a wine's qualities that some find amusing. There's also this great piece of advice - make sure your offspring is born in a year of good vintage or look like a fool every year for the rest of your life.

Paul de Marsuel (Niels Arestrup) is the owner of a prestigious chateau and vineyard and produces some of the best wine in Saint-Emilion, France. He is despondent, though, that his son, Martin (Lorent Deutsch), is not qualified to take over his precious business. Paul’s vineyard manager, Francois (Patrick Chesnais), is dying from pancreatic cancer and Paul takes it upon himself to summon Francois’s son, Philippe (Nicolas Bridet), to come home. This decision will have far-reaching effects in “You Will Be My Son.” Director Giles Legrand brings together what amounts to four father/son stories set in the sunny clime of wine-producing France. It is, at its heart, a tale of a father’s disdain of his natural son in favor of the son of another. Martin, and his wife Alice (Anne Marivin), see that he is the heir apparent to the throne of Paul’s empire. His hopes are soon dashed, though, when Philippe returns home from his job as vintner for the Coppola estates to be with Francois. Paul sees the young man as a kindred spirit with the same tastes and ability to produce fine wine and, without consulting anyone, appoints Philippe supervisor of the harvest over Martin. There will be a struggle for the throne but the results are not what you quite expect. (The film’s ironic twist hit me just as the filmmakers make it, showing deftness in both filmmaking and storytelling.) The characters are all fully drawn but Neils Arestrup’s Paul is such an unrelenting jerk to his son, with Paul publically humiliating Martin at every chance, you want him to get his just desserts, but these desserts take too long to happen. I guess that is a sign that the actor and director make the character hit just the right buttons in me. The story is Shakespearean in tone and mood as the elder attempts to thwart the younger and the younger fights against his father’s maneuverings. There are struggles on several other levels as Francois’s long time resentment for Paul comes to the surface. Philippe, too, is complicit in Paul’s plot by not refusing to fill his mentor’s shoes. I cannot say that “You Will Be My Son” is a likable film but Legrand does a fine job in telling his story and, with his actors, develop unique, and not always likable, characters.