You the Living (Du Levande) on DVD 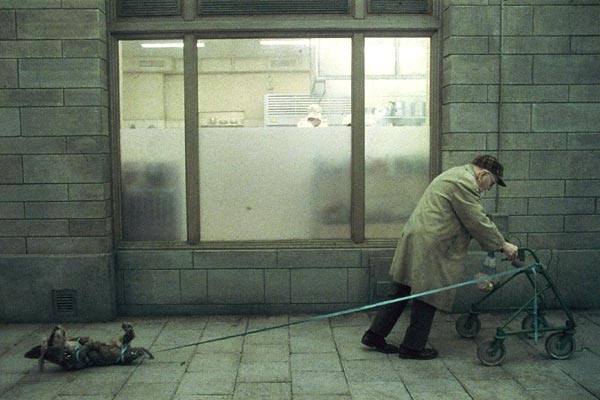 Miserable Mia (Elisabet Helander) keeps telling her boyfriend and her own dog to take off because nobody understands her. The members of a marching band practice separately much to the chagrin of their wives. A teacher breaks down because she had a fight with her husband that morning. Her carpet salesman husband has trouble focusing on the job because of the same fight. Young Anna (Jessika Lundberg) is undone when the rock musician, Micke Larsson (Eric Bäckman), who bought her a drink doesn't call her and a Stockholm psychiatrist concludes that his patients are all demanding to be happy but most are just mean in "You, the Living."

How can a film about such a bunch of depressives leave one feeling so good? Because writer/director Roy Andersson (2000's "Songs from the Second Floor") clearly delights in the absurdity of our tendency to derail our own for happiness. Using fifty carefully constructed tableaux, Anderssons' citizens of Stockholm exist in bleached out worlds (heaven? limbo?) where relationships are unhappy, money is a constant worry and someone always gets crowded out of a bus shelter, elevator or ticket line and yet everybody seems to make music! (Andersson's staging of one guy getting cut in line to buy a train ticket is worthy of Tati.) Along with Finland's Aki Kaurismäki and Norway's Bent Hamer, Anndersson forms a kind of Scandanavian trilogy defining a distinct brand of Northern European humor.

There are dreams relayed to us. The film's very opening, foreshadowing its end, shows an older man waking up alarmed from having dreamt about being bombed. A construction worker stuck in traffic tells of being invited to a dinner party where he knew no one and so, to lighten the group's mood, decided to do 'the tablecloth trick.' It doesn't go down well (and exposes Sweden's hidden past when the table underneath is revealed, adorned with swastikas) and he is tried for destroying 200 hundred year old china and sentenced to the electric chair! In the film's most ethereal sequence, Anna dreams that she has married Micke, who plays his guitar as she unwraps wedding gifts and their apartment begins to move like a train on tracks, stopping at a station where a crowd has gathered to congratulate them. This is one of the most magical scenes I've seen in the cinema in quite some time.

Andersson builds all his sets in a studio using old fashioned trickery to fool the eye (there's a great feature on the DVD which shows you how he does it). Everything is very carefully placed for maximum impact. Watch that second scene where Mia's being misunderstood. She sits in the right hand foreground on a bench wearing a copper colored blouse. Her biker boyfriend, Uffe (Jugge Nohall), stands to the rear left holding her dog, Bobbo's, leash. Bobbo is a deep gold color. Behind Mia are several large tree trunks with a red sunset reflecting on them, as it does on the top of the building in the distance. The color composition is beautiful. All scenes have an exit - in this case, steps leading down from the park - but usually a window or door. Characters cross each other's little stories in unexpected ways.

The DVD presents the film in its original 1:66:1 aspect ratio and there are many features, including a director's commentary. Andersson visited New York for a retrospective at MoMA and his talks there are featured (in varying quality). Better is a visit to his Swedish studio with Andersson as a guide. He talks not only about his filming techniques, but what inspires him. It's no surprise to hear that paintings are often a catalyst and he discusses a Brueghel painting which may be the jumping off point for a third film of a trilogy. For the Andersson initiate (which could be most in the U.S. where only "Songs from the Second Floor" got any kind of release), there are clips from all his previous shorts and films.

"You, the Living" is being released on DVD by Palisades Tartan, a distributor which specializes in the very best of European cinema and Asian extreme cult titles.

Lives and paths cross in Stockholm as a day goes by, thunderstorms prevail and Dixieland thrives in a series of imaginative and funny vignettes in the DVD release of Roy Andersson’s wonderful compilation of the fun and foibles in “You, The Living”.

Andersson walks in the footsteps of the great French comic filmmaker Jacque Tati with his slice of Stockholm life that weaves its way through the trials and tribulations of its inhabitants. A tuba playing man drives his downstairs neighbor to distraction with his nocturnal practice. A teacher has a breakdown before her class. A despondent woman breaks into song with Dixieland accompaniment. A barber claims to be in a bad mood when he gives a customer a reverse Mohawk. A psychiatrist tells the camera that all of his patients are selfish and mean and a continuous thunderstorm gets everyone’s attention. These lives and stories weave their way through the city of Stockholm in witty, satiric ways.

Using about 40 vignettes to tell the writer-director’s stories, “You, The Living” populates with all manner of quirky, eccentric and/or wacky characters. As we meet each one, they all have a story. Joy, sorrow, happiness, lack of self-confidence and a prevailing anxiety are just some of the emotions studied by the writer-director and his actors.

The DVD is chock full of extras with a commentary by helmer Andersson, excerpts from his earlier films, a making-of featurette plus more. It is an articulate compilation of extras and the insight given in the making-of featurette is startling in showing the filmmakers’ genius in “tricking the eye” to get the proper visual effects.