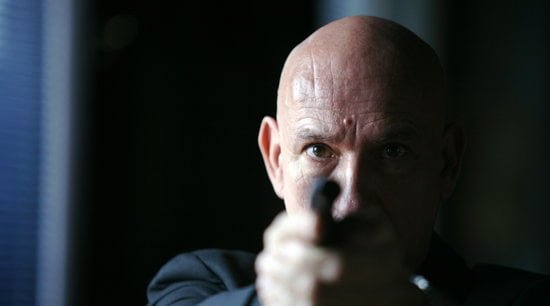 Frank Falenczyk (Ben Kingsley) is a hit man for the Polish mob in Buffalo. Lately, though, his addiction to the bottle is intruding on his work and, while drunk, he messes up an important contract on a rival mob leader. His boss, Roman (Philip Baker Hall), ships him out to San Francisco to dry out and he meets pretty Laurel (Tea Leone). But, things get more confused for the alcoholic killer and Frank is forced to get his priorities sorted out in “You Kill Me.”

Frank Falenczyk (Ben Kingsley, "House of Sand and Fog," "Oliver Twist"), a hit man for the Buffalo-based Polish mob, is letting his alcoholism get in the way of his work, letting rival Edward O'Leary (Dennis Farina, TV's "Law & Order") slip through his fingers while asleep at his post. He's ordered by boss Roman Krzeminski (Philip Baker Hall, "Zodiac") to head to San Francisco to dry out and kept under the watchful eye of local contact Dave (Bill Pullman, "Rick," "Scary Movie 4") who makes sure he attends AA meetings and shows up for his job at Rainford's Funeral Home. There Frank meets client Laurel Pearson (Téa Leoni, "Spanglish"), a young woman unfazed by any of the revelations he opens up with who becomes the love of his life in "You Kill Me." After acquiring indie cred with his first two features, director John Dahl ("Red Rock West," "The Last Seduction") wasted away in Hollywood mediocrity with his followups ("Rounders," "Joy Ride," "The Great Raid"). With a script by "Chronicles of Narnia" screenwriters Christopher Markus and Stephen McFeely, Dahl gets back to that loosey goosey sweet spot that has evaded him for so long. We're introduced to Frank swilling vodka and shoveling the snow from his steps when buddy and boss nephew Stef (Marcus Thomas, "Drowning Mona") swings by to give him a pep talk and the job that he'll manage to mess up. In San Francisco he steadfastly hangs on to his vodka bottles in an apartment found by Dave who pushes him out the door to the local AA meeting, where he gains a laid back sponsor in Tom (Luke Wilson, "My Super Ex-Girlfriend," "Vacancy") and to a job working with the dead for Doris Rainford (Alison Sealy-Smith, "Dark Water," Take the Lead"), a woman who somehow releases Frank's latent sense of humor. That a young and beautiful ad exec would be attracted to the older somewhat awkward hit man is never in question because Leoni plays her deadpan sexiness matter of factly against Kingsley's understated openness. This is a man who may slip off the wagon, but he'll never lie and he provides awfully good protection. Not so strange, though, is that it is Laurel who helps save Frank when he returns to an outright mob war back in Buffalo. Kingsley is just brilliant with this 180 degree spin on his rabid "Sexy Beast" killer. There is a sweetness about him that comes through as he earnestly tells his AA group that he needs to sober up so he can pull clean hits again. (When he admits to Laurel he doesn't regret killing, only killing badly, he atones by sending gift certificates to those victims' families.) The only slightly perplexing thing about Kingsley's performance is a hint of Irish that inflects his accent. Producer Leoni is right in her comedic element and makes her fight for Frank emotionally right. Support is terrific all around, from Pullman's shady real estate broker to Wilson's amused acceptance of his new protege and Hall's authoritative mob boss. The lesser known Thomas feels true blue. Only Farina offers up leftovers. Production nicely contrasts cold, bleak Buffalo with the romance of San Francisco. Original music by Marcelo Zarvos ("Hollywoodland," "The Good Shepherd") fits the film's wry tone with subtle accordion and plinking piano. "You Kill Me" is a welcome addition to the darkly humored hit man genre and a welcome return for director John Dahl. Kudos to Kingsley for courting Leoni, an unlikely pairing that sparkles.

While Frank’s cyclical tale of alcoholism and recovery is central to “You Kill Me,” there are many other layers to this little gem of a movie. His romance with Laurel is told with an eye to the love of two people that overcome the trials of the hit man’s life. He opens himself up to her and it looks like he might just get a “normal” life. The question is, though, just what is normal for a hit man? Another side of “You Kill Me” revolves around events back home in Buffalo. His boss Roman is under increasing pressure to give control of his criminal empire to Irish mob usurper O’Leary (Dennis Farina), who uses his might to take over the Polish don’s territory. The battle that ensues will draw Frank back to his old life, but in ways far different than before. Ben Kingsley, a fine actor in anyone’s view, is excellent as Frank Falenczyk. When we first meet him, Roman admonishes him to not to fail in the all-important hit on O’Leary. He stakes out a train station where the Irish mobster is supposed to arrive but his steady tippling on a bottle of booze causes him to pass out, missing the kill. His loyalty to his boss keeps him from being a victim of mob justice and he is sent to San Fran to dry out. Once there, Dave (Bill Pullman), a realtor with connections to the Polish mob, intercepts Frank and gives him Roman’s instructions. The man is assigned to keep an eye on Frank, making sure he joins an Alcoholics Anonymous program and secures Frank a job at a local funeral home where he is to assist the owner in the day-to-day work as a mortician. He does, grudgingly, attend an AA meeting where he meets Tom (Luke Wilson) who becomes his sponsor and friend. The richly unique characters surrounding Frank help flesh out the background of “You Kill Me.” Only Dennis Farina gives a performance that we have seen before from the actor. Director John Dahl marches to his own tune with “You Kill Me.” This is the kind of film that defies pigeonholing as Frank’s life takes many unexpected twists and turns to its quite satisfying end. Go see it for Ben Kingsley, stay for it to be nicely, often funnily, entertained.