You Are So Handsome (Je vous trouve très beau) 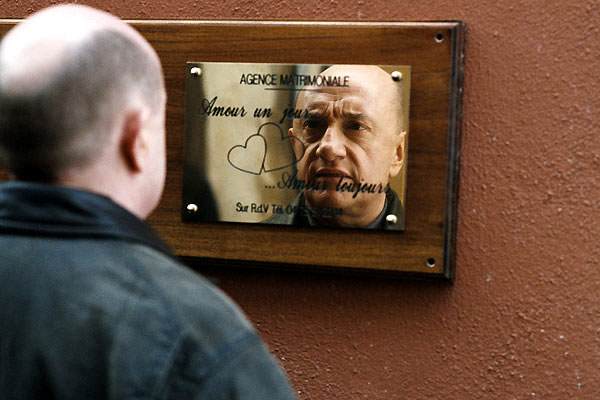 When his common law wife dies, Aymé Pigrenet (Michel Blanc, "Monsieur Hire," "Embrassez qui vous voudrez") doesn't need help with grief, he needs help with his farm. When the dishes have piled up, the cupboard is bare and the cat has been lost in the washing machine, Aymé remembers his lawyer's tactful mention of a marriage broker and so meets Mme Marais (Eva Darlan), a specialist in Romanian women desperate to move to France. All but one are eager to tell him "You Are So Handsome."

Actress/screenwriter Isabelle Mergault makes her directorial debut with a romantic comedy that has a familiar structure on the surface, but surprises with some unusual social and political undercurrents. But Mergault's tale of seemingly mismatched arrangement would be just another little romantic ditty were it not for the terrific performances of its leads. The great and uncommon Michel Blanc makes a typical journey of embittered older man discovering the joy in life and love fresh and endearing while Romanian actress Medeea Marinescu and her effervescent Elena simply brightens up the screen. Aymé is embarrassed to tell his extended family that he is going to Romania to import a potential mate, so he makes up a story about vacationing in Germany and finds himself burdened with a disposable camera and requests for sauerkraut. His gruff nature remains in place as one model gorgeous woman after another tells him she loves to disco and how attractive she finds him. When he snaps at one, Elena, waiting to come in, gets the skinny and so changes her appearance and her spiel to appeal to his need for a farm woman. When he takes her out, she pretends not to find his behavior - taking pictures of wursts and German shepherds - odd. Back in Valence, Aymé makes an inconvenienced show to his brother, Roland (Wladimir Yordanoff, "The Taste of Others," "L'Auberge espagnole"), of a letter from 'a friend' in Bucharest who is sending a young woman to intern on Aymé's farm. Elena arrives bearing a huge gardenia (she's mistakenly thought it was called a 'guard-elena') and quickly gains the attentions of Aymé's mute farm worker Antoine (Benoît Turjman) and his neglected, unnamed dog which she names Cuifut, Romanian for whiner, a joke on the hard to please farmer. Aymé becomes jealous when Elena flirts with the young men in town, but he rejects her attempts to seduce him. When she runs away in tears, he admits that she is dear to him and he has been feeling unworthy of her. And yet, although these two clearly have great affection for each other and Aymé goes so far as to buy an engagement ring, they cannot seem to connect. And Elena has a secret. Mergault's creation of Aymé is a bit unbalanced, but Blanc miraculously smooths over the rough spots. Here is a man who appears to have no emotion when Huguette (Agnès Boury) dies in an accident, yet he is sensitive enough to appear distressed over the concept of Eastern European women being bartered for cash (Mme Marais assures him he will be a 'savior'). The East's economic dependence on the West and the social imbalance between the two is a point well integrated into the film. Mergault has some fun with cultural differences through language. Elena's mangled French is used to connote other meanings (and the subtitlers have done a good job maintaining this context). When she screams 'It's not my flaw!' Aymé admits that indeed, it is his own flaw. Broader word play can be seen in the aforementioned plant and an amusing scene when Aymé stops in at his brother's and becomes pulled into a game where one must guess the identity one cannot see written on a paper hat. Aymé becomes French pop star Mylene Farmer, a play on both his profession and tin ear. "You Are So Handsome" is a little movie writ larger by its stars and director Mergault shows talent for taking a shallow plot and giving it substantial shadings.

Ayme (Michel Blanc) and his common law wife, Huguette (Agnes Boury), have been together for many years but have each lived alone for a long time. When Huguette dies in a tragic accident Ayme is left to run his farm by himself. With no one to do the cooking, cleaning, laundry, milking the cows and tending the chickens, he decides to seek a mail order bride to do the chores. But, Ayme learns that this is not quite so simple when he brings home Elena (Madeea Marinescu) from Romania in “You Are So Handsome.” Actress Isabelle Mergault makes her directing debut with a simple, oft-told story that benefits greatly from the performances of Michel Blanc and Madeea Marinescu. Ayme is a taciturn, hard working farmer who, despite his years of marriage, has pretty much been a loner. He wants a new wife less than he does someone to take care of him and his home. He hires marriage broker, Mme. Marais (Eva Darlan), to find just such a partner and the pair heads off to Romania. The single women in Bucharest would like nothing more than have a well-to-do French farmer take them away from the hard life in Romania so they line up in droves when the interviews begin. All of the applicants dress to the nines and tell Ayme that he is extremely handsome. He knows he is anything but and rejects every one. Elena, realizing that her potential spouse is not looking for a beauty, makes herself quite plain and, during the interview, says all the right things. Ayme makes the decision to bring Elena back to France. Ayme told no one, friends or family, about his plans and introduces Elena as a distant relative who has come to intern on his farm. He also claims that she doesn’t speak a word of French (even though she does) to keep any questions at bay. Once he settles Elena into the routine of farm life he figures that life will go back to the way it was when Huguette was alive. But, 28-year old Elena is a smart, vivacious young woman (who, unbeknownst to Ayme, has a young daughter back home) and is not satisfied with being a mere housekeeper. Things will come to a head very soon between the two. We’ve been there before, many times, with the story of two lonely people who develop a growing fondness for each other until they live happily ever after. What makes “You Are So Handsome” its own film, as I said, is due to Blanc and Marinescu. There is wonderful chemistry in their May/September relationship and make it believable that there could be a romantic spark between young, pretty Elena and short, stout, dour and middle-aged Ayme. As they go through their trials and tribulations, I found myself rooting for a happy ending. This kind of emotional involvement by the viewer makes “Handsome” a pleasant, lyrical little film that is satisfying from start to finish.