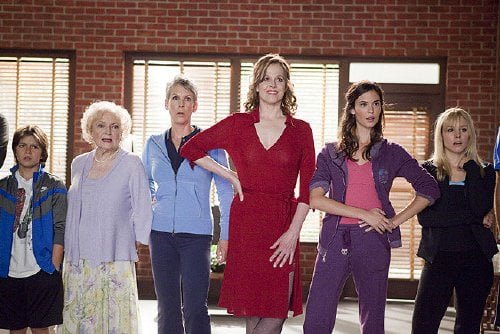 Marni (Kristen Bell, "When in Rome") is a successful L.A. PR exec who presents her high school experience as a bullied geek to explain the importance of perception to new interns. After learning she's been promoted to VP of the New York office, Marni heads for home to Richmond, the small northern California town where her beloved older brother Will (Jimmy Wolk, TV's "Lone Star") is getting married. Then the bomb drops. Will is marrying the head cheerleader Joanna (Odette Yustman, "The Unborn") who unbeknownst to him made Marni's life hell in "You Again."

Director Andy Fickman ("She's the Man," "The Game Plan") churns out another Disney commercial teen comedy but while he's got a pretty talented cast to work with, he cannot figure out how to fix first time feature writer Moe Jelline's horrible execution of his high concept. "You Again" begins and ends well, but everything in between is forced, telegraphed and contrived. The worst misstep is how they play one person as villainous and the other as a victim and then try to change that without changing any of the facts that made each what they are. It's flip flopping and it rings horribly false. That backgrounding presentation was an economical and different way in which to sow the story's seeds, but as soon as Marni boards a plane things start to wilt. There's no reason why she would need to get the news from her mom on an Airphone days before her brother's wedding and no reason why she would have to flout airline safety rules after receiving it other than to slip in a cameo by Disney/Fickman fave Dwayne 'The Rock' Johnson as a federal Marshall with a sympathetic ear. When the 'rhymes with witch' formerly known as Jay Jay arrives at the Olsen home, she acts like she doesn't remember Marni and has adorned a persona close to Mother Theresa's. She also steals all of Marni's homecoming thunder, beloved by all and snuggled up to Marni's Grandma Bunny (Betty White). Even the family dog, Cocoa Puff, snarls at Marni and wags at Joanna. Then Joanna's only family member, the uber successful international hotelier Aunt Ramona (Sigourney Weaver) arrives and puts a parallel spin into play - seems she was best friends with Marni's mom Gail (Jamie Lee Curtis, "Freaky Friday"), at least until something went horribly wrong at their high school prom. A typical comedic 'bit' in "You Again" has Gail using Ramona's private bathroom. As soon as she begins to hold an earring up to her ear, we just know it will fall down the drain. Emergency plumbing and wardrobe destruction ensue. Yawn. Ramona's hired the world's most desired wedding planner, Georgia King (Kristin Chenoweth, like a wind-up ghoul on poppers), to plan the entire event. The entire family goes for a dance lesson which begins with King making an entry that wouldn't be misplaced in Vegas. Then everyone behaves like three year-olds. Betty White asks her granddaughter to reapply her upper dentures, a screenwriter's ploy to get glue into Marni's hair that will have to be cut out, returning her to her high school bangs (glasses and zit-like ant bites follow). Depressing stuff. But what really sinks "You Again" (*spoiler alert*) is that Marni quickly learns that Joanna does indeed remember and Joanna's predetermined agenda is to take her down. When Marni retaliates by unearthing an old video that exposes her sister-in-law to-be, suddenly Marni's made to look like the bad guy. Then Joanna morphs into a poor misunderstood good guy who rues her earlier evil ways. The film does end with an amusing third parallel and a couple of surprise guest stars, then goes out with a big ending credit jam session with Hall and Oates performing Will and Joanna's 'song,' "Kiss on my List." Jamie Lee's picking up of a guitar is an obvious attempt to remind us of a much better attempt at the genre. Lee Curtis and Weaver are old pros, but even Lee Curtis struggles trying to make some of this material funny. As Marni's dad Mark, Victor Garber ("Titanic") manages to keep his dignity intact. Bell is perky and likable, which makes the filmmaker's late attempts to paint her as malicious just feel wrong. Yustman looks long and lanky but cannot unite Joanna's psychotically written character. Wolk and Sean Wing, who plays Marni's love interest Charlie, are vanilla good looking guys. Billy Unger's ("Crank: High Voltage") character of younger brother Ben has no reason for existence except for another strained late-breaking plot point. The film's one saving grace is Kyle Bornheimer (TV's "Worst Week," "She's Out of My League") as Tim, an employee of Georgia's who happens to be Joanna's ex-fiance. Bornheimer takes this wretched material and actually wrings some laughs out of it. Hopefully his ability to shine amidst this mess will be noted by casting directors.