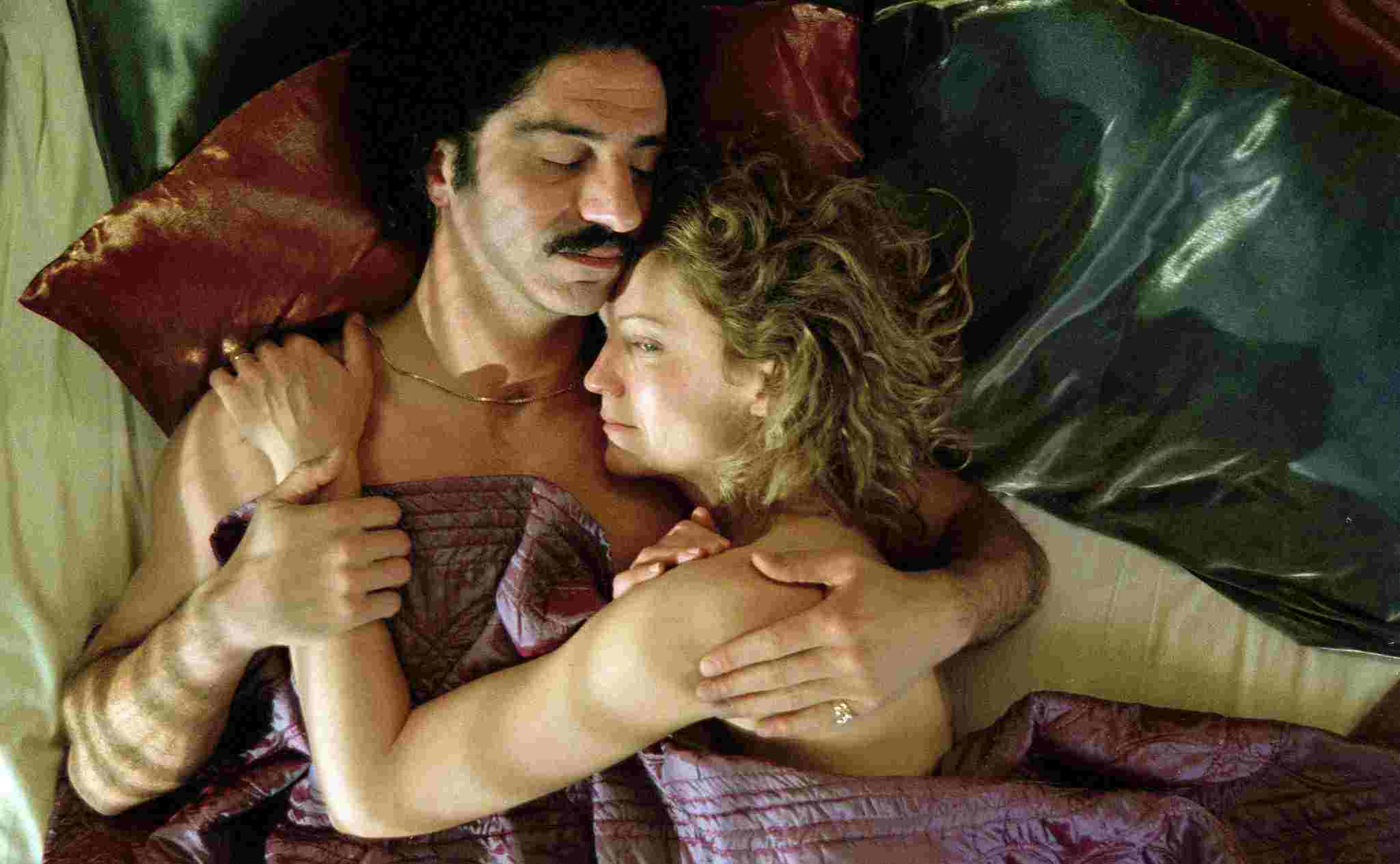 A maid (Shirley Henderson, "Bridget Jones: The Edge of Reason," "Intermission") relates that dirty sheets hold dirty secrets as she cleans the modern home of a wealthy couple. Husband Anthony (Sam Neill, "Wimbledon"), a British politician, that very evening escorts his wife (Joan Allen, "Off the Map," "The Upside of Anger"), an Irish American microbiologist, to a diplomatic banquet where a handsome Middle Eastern maitre d' (Simon Abkarian, "The Truth About Charlie," "Almost Peaceful") flirts with her. She surprises herself when the headwaiter asks for her phone number. She says 'Yes.'

Writer/director Sally Potter's ("Orlando," "The Man Who Cried") reaction to 9/11 began as an experimental five minute short and perhaps should have stayed that way. Its evolution into "Yes," a film about two lovers from opposite cultures and religious beliefs, has been written in iambic pentameter (the poetic structure used by Shakespeare), a precious device whose success or failure lies with the individual actor's ability to deliver it naturally. Potter's main cast mostly avoids stressing the rhymes, but they come screaming out of her supporting players, particularly from the kitchen chorus of Billy (Gary Lewis, "Billy Elliot"), Virgil (Wil Johson) and Whizzer (Raymond Waring, "24 Hour Party People"). The additional Greek chorus of cleaners, whose discourse on mites, germs and viruses and the general sordidness of life doesn't mesh at all with her central themes of religion, politics, racism and love, demonstrates a director unable to shape her material. And Potter begins her film with Shirley Henderson's revelations of Anthony's naughty deeds, even as she fishes a used condom from the toilet. This marriage is on shaky ground as it is clear Anthony has been cheating. Potter clears the runway for 'She' (Allen) to do the same. Allen is flattered and flustered by the stranger's attention - clearly she hasn't been the object of male sexual attraction for some time and Allen is alluring in her girlish reaction. When the duo meet in a blooming London park, they speak poetically, 'He' of Beirut's sensuous apricot, 'She' of Ireland's nourishing potato. OK, I guess we're in for some extreme contrasts here. Potter often expresses her ideas better visually (cinematography by Aleksei Rodionov, "Passion in the Desert") than verbally. 'She' has become a scientist, studying human embryos and microscopic germs, as a result of exploring her religious beliefs and her sterile lab environment could not be more different than vibrantly colored silks which adorn her lover's bedroom. Unfortunately, the great passion between 'He' and 'She' is one of those love affairs of artfully arranged hair and fabrics carefully designed to present the actors as fabulously as possible. After 'He,' a former doctor reduced to kitchen work in non-native England, loses his job defending his way of life against racist remarks, he suddenly decides to take a religious high road and deny his blond, American lover. 'She,' then rushes to the deathbed a beloved Irish aunt (Sheila Hancock, "Love and Death on Long Island"), a Communist who gives her niece the idea of going to Cuba! Is Cuba the new Switzerland, a no man's land for Middle East to meet West? "Yes" is a film of crazed romanticism, perhaps closest in spirit to Potter's "The Tango Lesson," in which she starred herself as an older women involved with an exotic younger man. There are many intriguing elements to the film, but they fit together like jigsaw pieces from three different puzzles. Abkarian gives a particularly impassioned performance, but Joan Allen, so great this year in "The Upside of Anger" and "Off the Map, here seems a little antiseptic. Sam Neil has one great solo bit where he gets to show off his air guitar, but otherwise is saddled with a sleazy, toss away subplot involving his wife's goddaughter (Stephanie Leonidas). Hancock's deathbed speech, which Potter wisely sets to silence, is quite lovely, an individual's fervent admission that she wants to be mourned. Other parts of the film are intriguingly scored by Gustavo Santaolalla ("21 Grams"), Kronos Quartet and the instantly recognizable Philip Glass ("The Hours"). At film's end, the maid (Henderson) confides that germs and viruses are never gone, just moved around, so nothing is ever truly spotless. We literally (and, hit us over the head, symbolically) leave a mess when we depart. Unfortunately, so has Potter. "Yes" has beauty and passion, but it is undeniably a mess.

She (Joan Allen) is stuck in an unhappy marriage with her scientist husband, Anthony (Sam Neill). One evening, while at a formal dress function, She is attended to by the maitre’d (Simon Abkarian), an expatriate Lebanese surgeon who gave up his practice when he moved to London. He and She set off on a passionate affair that will redefine them both in Yes.” I haven’t seen a Sally Potter film since her strangely told tale, “Orlando (1992),” about a young man (Tilda Swinton) ordered by Queen Elizabeth l (Quentin Crisp) to never grow old. The story follows that dapper queen’s consort over the centuries from one sexual exploit to another, even involving a miraculous sex change. So, when presented with “Yes” my feelings were: how weird can it be? Yes” may not be a “weird” film but it is certainly unconventional. The dialogue is in iambic pentameter rhyme and Potter uses a variety of film techniques – slightly slowing down or speeding up the action; shots through water and glass to show that things aren’t always clear; and, the use of different medium such as film, video and, even, closed circuit TV. This makes for some interesting experimentation in filmmaking but an experiment that distanced me, the viewer. I found my mind paying more attention to checking the rhyme of the dialogue rather than what was being said. My eye was distracted by the varying film styles and stock as the experiment bore on. Joan Allen is a dynamo of an actress and commands the screen in every thing I have seen her in. She continues her presence as She, despite the filmmaker’s distracting techniques, and has palpable chemistry with costar Abkanian. The actor, in his first English-speaking role, creates a charming, likable and richly defined character in He and is given a sympathy-building backstory about why a prominent surgeon would give it all up to become a London chef. Sam Neill is relegated to the thankless role as She’s self-centered, uncaring husband who seems to sit around the house getting drunk and playing air guitar to old rock tunes. Shirley Henderson, as the ever-watchful housekeeper, is the narrator and the film’s all-seeing eye. I’m not sure if this character works or not but I was happy when the film returned to Henderson at the end to wrap things up. (Probably because I just wanted it to wrap up.) Yes” is not the kind of film that will appeal to the average movie-going bear. This is art house fare and for those who intrigued by the idea of poetry as dialogue. I’m not intrigued and