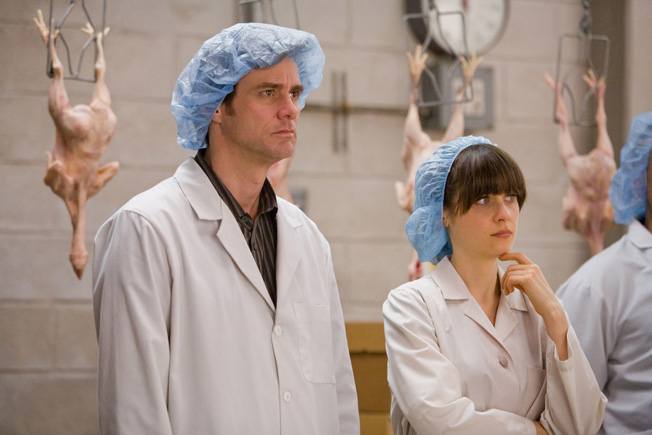 Carl Allen (Jim Carrey) is a divorced loan processor with no social life when he runs into a former colleague, Nick (John Michael Higgins, "For Your Consideration," "Evan Almighty"), who claims to have had a life-changing experience. Nick convinces the reluctant Carl to go to Terrence Bundley's (Terence Stamp, "Wanted," "Get Smart") self help seminar and Carl becomes turned on to life again, taking every opportunity that comes his way. Carl becomes a "Yes Man."

"Yes Man" benefits greatly from two factors. First, there is the Zooey Deschanel ("Elf," "The Happening") factor. She's is so talented and adorable, she perks up most material she graces with her presence, and when allowed to play a singer, as she is here, and not only a singer but the lead singer/songwriter of a bizarre cult band, she really shines. Second is the Jerry Lewis factor, that ability that Jim Carrey has to time pratfalls like a master and act so silly it becomes actually funny. Unfortunately, in "Yes Man" these two pluses are up against an adaptation of the high concept book by Scotsman Danny Wallace book that fails to maintain its own rules, but Carl Allen is sent spinning into enough different humorous predicaments, some of which are thoughtfully connected, that the film works more than it doesn't. After leaving the "Yes" convention, Carl is immediately hit upon by a homeless guy who obviously scouts the location. He asks for a ride to a park, then asks to use Carl's cell phone, which he uses until the battery is dead. On his way out, he asks for a handout. Carl's dogleg ends up leaving him in a desolate area out of gas with a non-working cell phone and no money. But, of course, saying 'yes' to life presents opportunities in the bleakest moments. When filling a container at a gas station, Alison (Deschanel) zips in on a scooter and offers Carl a ride back to his car. Sparks fly, but all Carl is left with is the self-portrait Polaroid she's snapped. And so life goes on, with Carl suddenly approving loans for the wildest ventures, accepting sex from his over-friendly neighbor Tillie (Fionnula Flanagan, "The Others," "Four Brothers") and agreeing to throw a bridal shower for best friend Peter's (Bradley Cooper, "The Wedding Crashers") fiancee Lucy (Sasha Alexander, TV's "NCIS") who hates him. He also takes lessons in Korean, guitar and piloting an airplane. When he accepts a flyer for a band from the guy he's fluffed off every day prior, he finds himself at a performance of Alison's band and is able to get her to see him again. Life's looking up when, after a wacky spur of the moment weekend getaway, Carl's arrested at the airport on suspicion of terrorism and Alison learns that the carefree guy she's told she loves has been living life bound to a self help covenant. Cue final act to get the girl back. Director Peyton Reed ("Down with Love," "The Break-Up") manages a huge cast and a plethora of locations and events with seeming ease, connecting the dots that tie a Korean lesson with wedding planning and, later, match making. Screenwriters Nicholas Stoller (2005's "Fun with Dick and Jane"), Jarrad Paul (TV's "Living with Fran") and Andrew Mogel push too much of a good thing, however. Carl has agreed to say 'Yes,' but in their interpretation he occasionally is forced to obey commands such as 'Stop!' (when caught trespassing at the Hollywood Bowl) or 'Get Away From Me!' (when Alison discovers his secret at the airport) - not the same thing. The wealth of situations also means some are underdeveloped. Carl acquires Faranoosh (Anna Khaja, "King of California") from a Persian bride web site, but it isn't clear what their contract is nor how she disappears. Slacker buddy Rooney (Danny Masterson, "Smiley Face") takes advantage of Carl's situation, but it is only noted in passing and has no bearing on plot. They do pinpoint just the right moment, though, for Carl to realize he must say 'No' after having thrown many outrageous ones his way. This is a perfect Carrey vehicle, although he's getting a bit long in tooth for some of the hi jinx and as a romantic partner for Deschanel, almost twenty years his junior. Still, when he's on, orchestrating a fall like Rube Goldberg, taping up his face or hyper-monologuing his way through a soliloquy on Red Bull, he's a comic treat. He has great chemistry with "Flight of the Conchord's" Rhys Darby, making his feature film debut as Carl's boss, a naive geek who throws funny hat and Harry Potter parties and who believes he invented the term 'sh*%can.' Darby's naivete is a sweeter spin on his equally clueless manager character in "Conchords." Deschanel, the queen of sexy spaciness, is a delight. Her band, Munchausen By Proxy, is a trip (created with Deschanel and San Francisco-based Von Iva), and their lyrics, which Deschanel collaborated on, hilarious. In three short scenes, Terence Stamp makes a stronger mark than any of his recent comedy outings with an inspired comic performance. The film ends with a great visual gag at his character's expense. For all its complex stunts and situations, "Yes Man" deserved to be better, but Peyton Reed and his extensive cast have hit the mark enough times to give the film a 'yes' vote.