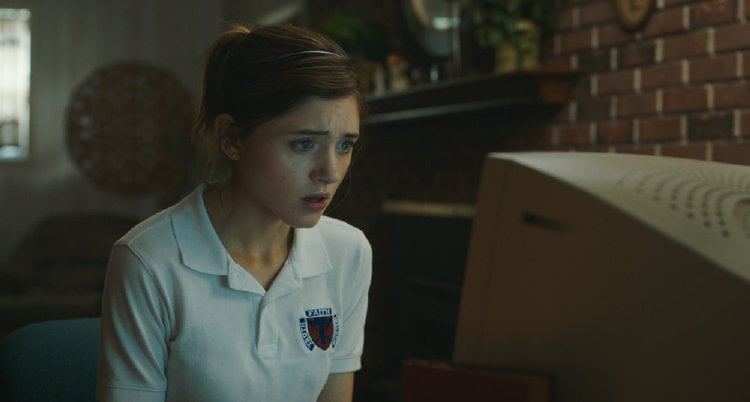 It’s 2001 and high schooler Alice (Natalia Dyer, Netflix's 'Stranger Things') is discovering what a turn-on going online can be when HairyChest sends her ‘a sexy pic of he and his wife’ and asks if she ‘wants to cyper.’  But Alice’s natural impulses are continually decried at her Catholic school where Father Murphy (Timothy Simons, HBO's 'Veep') teaches that sex is only between a man and a woman for the purpose of baby making and any other iteration is a sin.  Attending the Kirkos retreat, Alice’s sensibilities are shocked by a whole lot of hidden hypocrisy in “Yes, God, Yes.”

Running a zippy 78 minutes, writer/director Karen Maine (writer, "Obvious Child") only had to add 67 minutes to her same-titled 2017 short for her feature directorial debut.  Wisely, she cast the same actress, ‘Stranger Things’ Natalia Dyer, as her lead as it is Dyer’s talent with expressive facial reactions, especially those of the naively clueless variety, that is the film’s biggest asset.  The film is an amusing, if somewhat slight, exploration of budding female sexuality within a repressive religious environment.

As Alice navigates her high school hallways, Mrs. Veda (Donna Lynne Champlin, "Downsizing") is out with her ruler telling any female whose hem rises more than 2.5 inches above her knee told to report to the principal’s office.  In Father Murphy’s class, there’s a lot of snickering when a male student asks about ‘self love,’ so good girl Alice surprises herself when her afternoon computer time inspires her hand to reach into her pants.  Later, in bed, she’ll discover alternate uses for a vibrating flip phone.

Back at school, Alice finds herself the object of nasty rumors involving ‘tossing salad’ for Heather’s (Allison Shrum) boyfriend Wade (Parker Wierling) in a hot tub.  While she’s wondering just why anyone would mix lettuce with hot water, her best friend             Laura (Francesca Reale, Netflix's 'Stranger Things'), who thinks an enema is the ‘water that shoots up your butt when you fall while water skiing,’ is denouncing her as a perv.  Alice’s reputational problems escalate at the St. Ignatius Retreat Center when Nina (Alisha Boe) discovers she lied about having a cell phone.  The penance of cafeteria cleanup gives Alice access to Murphy’s computer, where her attempt to reach HairyChest is interrupted at a damnable, if anonymous, moment.

Dyer’s comedic talents extend to the physical as Alice’s hormonal attraction to retreat coordinator Chris (Wolfgang Novogratz) gives her the opportunity to flex feminine wiles.  A scene where she escapes the grounds to guzzle a wine cooler with the permission of lesbian bar owner Gina (Susan Blackwell) is the film’s heart and catharsis.  As the film’s other actor of note, Blackwell lends her character the compassion of fellow persecution and the wisdom of overcoming it with strength.  This is Maine’s writing at its best and she uses it as a springboard to her protagonist’s emancipation.

I have been a lapsed catholic for over 50 years, for many reasons, so a teen coming of age movie that points out the hypocrisy and absurdity of evangelical religions and their attitude toward sex sounds just about right to me. Basically, the dogma of the church says that sex is between a man and a woman and only after marriage; otherwise it is a mortal sin. With the new technology of the internet at hand, Alice, through her foray into chat rooms, learns quickly: how can something that feels so good be bad?

Alice’s dilemma is exacerbated when she attends the evangelical Kirkos Retreat, led by Father Murphy (Timothy Simons) and his tyrannical assistant, Mrs. Veda (Donna Lynn Champlin). She submits to the constant lectures on being chaste and saving yourself for marriage, hoping it will relieve her of her guilt. But, Alice is not so sure that her new feelings about her budding sexuality are actually against the rules of the Lord. In fact, what she sees is the hypocrisy of religion in the guise of the retreat’s leader, Father Murphy, who preaches abstinence – for the other so-called pious attendees – but does not actually practice it.

In 2017, director Karen Maine and her young star, Natalie Dyer, came up with an 11 minute short film about a teenage girl, a good catholic, who learns the pleasures of pleasuring herself. That spawned enough interest for the duo to reprise the idea into a feature length comedy. And, I have to say, the young star and her director hold their own as they expand the short to a feature length coming of age comedy.

Alice is a young woman of few words, so we see her world through her eyes. She is a wise observer but confused between her new feelings and her “faith.” Fortunately, Alice has an unusual epiphany at the most unlikely place, giving the story a femme-positive coming of age vibe that is both funny and meaningful.