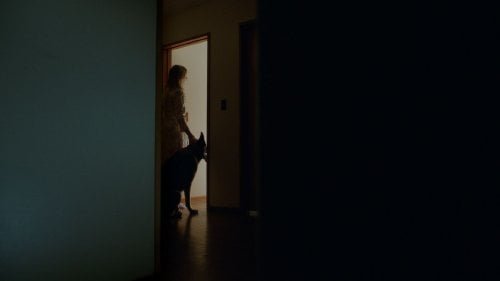 Four stories, starring four female leads and helmed by four femme directors, run the gamut from demon procession to the coming of age of the son of Satan to covering up a suicide during a kid’s birthday party and the contents of a mysterious box in the compendium titled “XX.”

For the 8th annual women in horror month, Magnet releases an anthology directed by women. The four shorts are woven together by Sofia Carrillo's Jan Svankmajeresque stop motion animation featuring walking doll houses and insects. While the concept is strong, the films are middling, only the last, Karyn Kusama's ("The Invitation"), delivering a punch. Jovanka Vuckovic kicks things off with "The Box." On the way home from a day's activities in the city with her kids Danny (Peter DaCunha) and Jenny (Peyton Kennedy), Susan (Natalie Brown, TV's 'The Strain') admonishes her son when he asks an old man with a glass eye about the red gift box sitting on his lap. She doesn't notice her Danny's strange expression after the man lifts its lid, allowing the boy to peer in. That night, Danny says he isn't hungry and goes to bed without eating. Three days later, dad Robert (Jonathan Watton) is growing frantic, but Susan seems curiously unconcerned about Danny's complete lack of appetite. That night she finds Danny whispering to Jenny on his bed. Jenny gives her mom a creepy stare. The next morning, she leaves without taking mom's proffered homemade cookie. Vuckovic builds tension with creepy style, but her film's ambiguous ending isn't very filling. C+ Annie Clark, the musician known as St. Vincent, makes her directorial debut with "The Birthday Party." Still in her robe, Mary (Melanie Lynskey) is rushing with preparations for her daughter's 8th birthday party when uber fashionable Carla (Sheila Vand, "A Girl Walks Home Alone at Night") arrives, giving her preparations a haughty once over. Carla believes Mary's daughter is anxious from observing her mom and asks where Mary's husand is, having seen his car in the driveway. Mary denies that he's home, only to find his body slumped in his office. With a nosy neighbor fishing for an invite and guests arriving in less than an hour, Mary struggles to keep her husband's death from her daughter. This one derives black humor from judgement and keeping up appearances, but it's slight. B- "Southbound's" Roxanne Benjamin gives us "Don't Fall," a tale of two couples out camping. When Jess (Angela Trimbur) jokingly grabs Gretchen (Breeda Wool) at the edge of a jutting rock formation, Gretchen is shaken. Then she learns that Jay (Morgan Krantz) has chosen an illegal spot to set up camp and her fears intensify. But I've already seen this film back in 2011, an Australian feature called "Primal," and this has nothing to add. It is also the only film that doesn't address motherhood, a shame for thematic unity. C It's a wise move to save the best for last. In "Her Only Living Son," writer/director Karyn Kusama imagines the life of Rosemary Woodhouse eighteen years later. Cora (Christina Kirk) is in a constant state of worry as Andy (Kyle Allen) approaches his eighteenth birthday. She's living under a false identity far from Manhattan in order to keep Andy away from the influence of his rich, movie star father and the circles he runs in. But Andy's actions are increasingly disturbing, as is the failure of his high school principal to punish him for a grizzly attack on a female student. Kusama conjures the same paranoia Polanski plunged Rosemary into, but her Rosemary isn't going down without a fight. B+ Grade:

“The Box” A mother and her two kids ride the subway. Her youngest, Danny, sees an odd stranger holding a gift wrapped box. “Do you want to see inside?” the man asks and lifts the lid so the boy can peer inside. When they get home, Danny refuses to tell what he saw and, to his father’s concern, refuses to eat – for days. Then, his sister and his father also refuse food. It is up to mom to get to the bottom of the hunger strike. She is not prepared for what is in store from inside “The Box.” The “what the heck was in that box?” sense pervades this unusual family story where the members, except for mom, succumb to the same mysterious malaise. The mother’s reluctance to see a problem seems to be her punishment to an unanticipated way – not for the squeamish. I give it a C. “The Birthday Party” A mom (Monica Linsky, is in the throes of preparing for her daughter’s eighth birthday party. She does not hear her husband come home until she finds him in his office. There is one thing wrong though – he is dead after taking a bottle of pills and guests will soon arrive. This comedy of errors has a slapstick vein that makes for a silly dark comedy that you know will not end well. How mom goes about covering up the shocking news, just to make sure the party does not have a single hitch, makes for a dark comedy about selfishness and appearance. I give it a C+. C+ “Don’t Fall” Two couples are camping in the mountains and exploring the vast landscape. But there is danger lurking and the four are not prepared for what will come. I was less than entertained by this “horror” story that is about supernatural possession. The problem is, the filmmaker never elicits any sympathy for her characters as they, one by one, fall into the clutches of an evil force. It is the least of the four parts of “XX.” I give it a C-. “Her Only Living Son” Most anyone familiar with classic horror films is very familiar with Roman Polanski’s “Rosemary’s Baby” where a mortal woman gives birth to the spawn of the Dark Lord. But, what ever happened to mom and baby afterward? The answer to this question is answered in “Her Only Living Son.” This is a clever look at the whatever-happened-to stories and here the subject is Satan’s son. This makes for some very amusing interludes as the boy’s mom prepares for his 18th birthday, knowing in her heart what that day means. This is the best of the four parts of “XX” and is the most entertaining, leaving the viewer in on the joke.