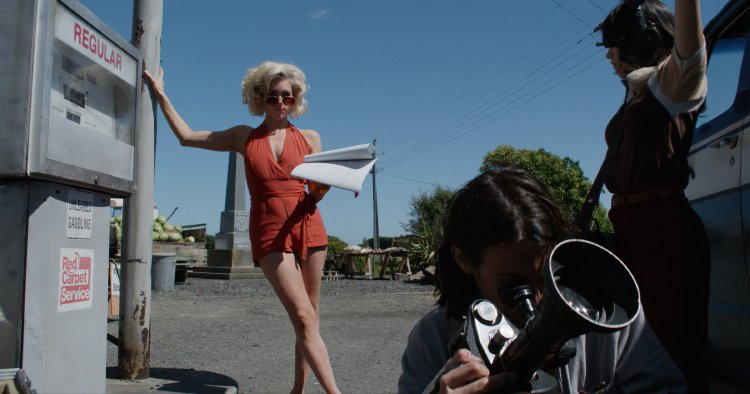 Three cop cars pull up to a rural Gothic Texas farmhouse where bodies lie inside and out draped in bloody sheets, an axe embedded in porch boards beside a trail of blood.  Sheriff Dentler (James Gaylyn, "The Meg") and his deputy will gasp in horror at what they find in the basement.  Twenty-four hours earlier, we see Wayne (Martin Henderson, "The Ring," "Smokin' Aces") lead his girlfriend Maxine (Mia Goth, "A Cure for Wellness," 2018's "Suspiria") along with Bobby-Lynne (Brittany Snow, the "Pitch Perfect" trilogy) and her boyfriend Jackson (Scott Mescudi, "Don't Look Up") out of a Houston strip club and into a panel van for a weekend in the country where they hope to become rich and famous making amateur porn in “X.”

“The Texas Chainsaw Massacre” is one of the most influential horror movies in history, but rarely do its imitators even approach Tobe Hooper’s 1974 masterpiece.  Writer/director/editor (with David Kashevaroff) Ti West’s (“The House of the Devil”) 1979 set homage is simply the best of its kind since Rob Zombie’s “The Devil’s Rejects.”  From director of photography Eliot Rockett’s ("The Innkeepers") slavish shot recreations to West’s cheeky twists on the original, “X” is both a love letter to Hooper and its own contemplation on beauty, aging, and the fear of mortality.  And while it offers genuine horror, “X” can be pretty funny too, a balancing act far too few are able to pull off.

Riding along in that panel van are producer Wayne’s filmmaker RJ (Owen Campbell, "Super Dark Times") and RJ’s girlfriend and boom operator Lorraine (Jenna Ortega, 2022's "Scream").  When that van pulls into a run down gas station, a chicken replacing TCM’s armadillo in the foreground, Wayne and Max head inside for supplies and talk of stardom while Bobby-Lynne suggests a more prurient angle for RJ to shoot Jackson pumping gas.  But when Wayne goes to talk to the man he rented an old boarding house from, the ancient Howard (Stephen Ure) appears from the dingy interior brandishing a shotgun and even after he’s talked down, the old man remains hostile.  Maxine notices an equally frail and elderly woman looking down at her from an upstairs window.

That elderly woman is Pearl (also Goth) and it’s soon apparent she is fixated on Maxine, following the young woman, then inviting her in for lemonade.  Meanwhile RJ’s begun filming Bobby-Lynne and Jackson going at it and his girlfriend, dubbed ‘Church mouse’ by Wayne, is taking it all in with rapt attention.  Back at the farmhouse, Howard isn’t pleased to note that extra empty glass on his kitchen table and all the pheromones in the air have turned his wife on big time, something he isn’t sure his heart can handle.  (Just imagine if Hooper’s group of five youths had been subjected to that mummified woman in the attic coming on to grandpa…)

After watching Bobby-Lynne, then Maxine perform for the camera, RJ is taken aback when Lorraine says she wants in as well.  ‘You can’t just change the movie halfway through,’ he protests, a sly tip from West that that is exactly what is about to happen.  RJ, who of course is really upset over the idea of watching his girl have sex with another man, stomps off into the night, but before he takes off in their van, he’s met by Pearl wandering up the drive in a white nightie.

Not only is this film a blast for genre fans, it is incredibly well crafted.  From those low tracking shots and big sky framings reminiscent of TCM, to the recreation of 70’s era video for the porn shoot, to the effectively tense score by Tyler Bates and Chelsea Wolfe and perfectly curated soundtrack, “X” is – no lie – awards level caliber.  There is a beautiful overhead drone shot of Maxine floating unawares in the pond as one big alligator makes a beeline towards her, West editing her exit from the water for peak anxiety.  There’s a lovely moment where Snow picks up a guitar and sings Fleetwood Mac’s ‘Landslide,’ West using 70’s style split screen to show us Pearl brushing what’s left of her hair.  Hair, makeup and costume all add to the overall effect, Bobby-Lynne’s yellow eye shadow, red halter romper and wooden platform heels not only defining the era, but establishing her as somewhat more sophisticated than Maxine with her garish blue shadow.  Watch for West’s clever links to prior horror, from references to “Psycho,” which, like TCM, was loosely based on Ed Gein and featured a mummified old woman, to Pearl’s slow spinning dance, a callback to Leatherface’s, as is the film’s departing pickup truck, set to Chelsea Wolfe’s haunting cover of ‘Oui Oui Marie.’

Watch the televangelist (Simon Prast) on the farmhouse TV for a hint of a sequel.  Definitely stick around through the end credits and be treated to a teaser for “Pearl,” a demented looking prequel.  “X” is the most fun I’ve had at the movies so far this year.