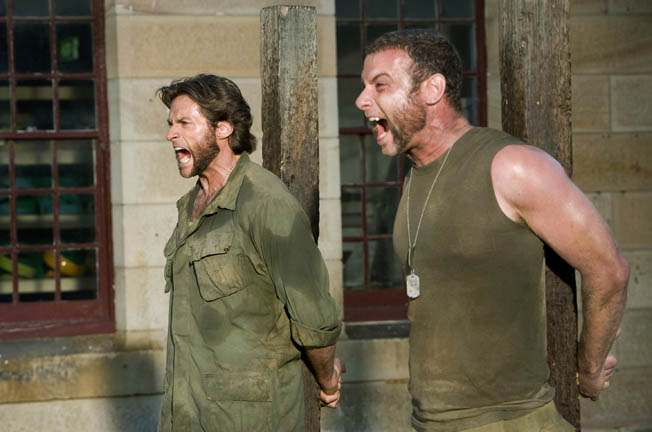 Before meeting Professor Charles Xavier and his band of superheroes, Logan (Hugh Jackman, "X-Men," "Australia") had quite a past, one that began in the 1850's when he ran away with his brother Victor Creed (Liev Schreiber, 2006's "The Omen," "Defiance") when their biological father killed their adoptive one. But Victor Creed would become Sabretooth, allied with the evil William Stryker (Danny Huston, "The Constant Gardener," "30 Days of Night"), while Logan would choose a different path. His story is told in "X-Men Origins: Wolverine."

This spin off from the "X-Men" series has had its share of troubles, from the inexperience of South African Indie director Gavin Hood ("Tsotsi," "Rendition") with big, special effects movies to the leak of an unfinished print on the internet. The buzz has been negative. But in the end, "X-Men Origins: Wolverine" is actually not bad, fired by satisfying performances from Jackman, a shrewd Schreiber and the 'why-isn't-she-more-well-known Lynn Collins (Lynn Collins, "The Merchant of Venice," "Towelhead") as Kayla Silverfox, the woman who gave Logan his "X-Men" name. After the prologue, which introduces the young brothers' 'specialness' ('What are you?' asks Logan's horrified mother after he kills his father with bony appendages), the film's opening credits roll against a montage which shows the young men fighting the Civil War (how metaphorical for what unfurls), WWI, WWI and the Vietnam War, which provides the jumping off point. The brothers' opposing moral compasses are slammed home when Logan protects Victor after he kills a U.S. officer who tried to stop Victor from raping a Vietnamese woman. The two end up in front of a firing squad, but we next see them shackled in a cell where Stryker visits them with a tantalizing offer - join others of their kind and *really* serve their country. (That execution, by the way? 'It tickled.') And so they end up in a squad with John Wraith (Will i Am), Wade Wilson (Ryan Reynolds, "Definitely, Maybe," "Adventureland"), Agent Zero (Daniel Henney), Frederick J. Dukes (Kevin Durand, "3:10 to Yuma," TV's "Lost") and Chris Bradley (Dominic Monaghan, "The Lord of the Rings," TV's "Lost"). Their first mission? Travel to Nigeria to locate Adamantium. But when Stryker uses terror and mayhem to achieve his goal, Victor revels and Logan reviles - and walks. We next find him years later, living in bliss as a logger in the Canadian Rockies with his girlfriend Kayla, but Stryker's Weapon X program means the involvement of all mutants, most very involuntarily, and Logan will be mutated into the "X-Men" version of Wolverine as part of his evil plan. "X-Men Origins: Wolverine" is about on the level with Brett Ratner's "Last Stand." Sure the CGI is often obvious and some of the sets, most notably Nigeria, are awfully artificial looking, but the story, although lacking in places, is enough to keep one occupied. There is no explanation given as to what causes mutation, nor are we given any psychological probing as to what makes one brother embrace the darkness while the other fights against his own nature and for what is right. But there is humor (Wolverine's airsickness, the character of Fred whose guilt mutates him into Fat Bastard's twin), romance (Jackman and Collins have really nice chemistry and it is a shame she'll be lost from a sequel, and lots of explosions (watch Wolverine take down a helicopter!). Julia Blake ("My Brilliant career," "Aquamarine") and Max Cullen ("Jindabyne," "Australia") provide a nice diversion from the "X-Men" action as senior farmers who provide Logan a temporary safe haven. Most of the supporting mutant characters are interesting, particularly Ryan Reynolds ("Adventureland") as the mouthy swordsman who becomes something pretty nasty under Stryker's agenda (good makeup effects), although Danny Huston, such a memorable villain in "40 Days of Night," is pretty bland here. Schreiber's performance is an odd twin to his conflicted brother of last year's "Defiance," here the elder, there the younger, and the effects used to make him appear to run like a big cat are pretty good - not easy to pull off. The film's finale leaves some unanswered questions and Logan is in an even worse place than when we meet him, but "X-Men Origins: Wolverine" should satisfy the fans and respectably kicks off the summer movie season.