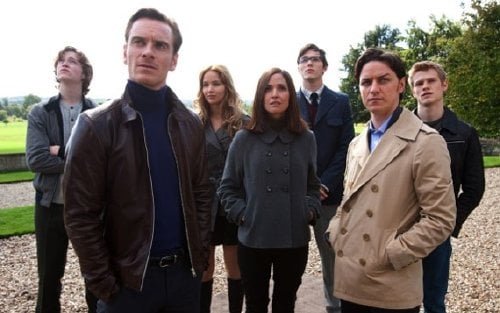 Charles Xavier (James McAvoy) has the incredible telepathic power of being able to read and influence others’ thoughts. He knows he is different and that there are more like him – human mutations that have superhuman abilities – and begins to assemble these powerful people. However, an evil force is loose upon the world in the early 1960s. Sebastian Shaw (Kevin Bacon), with his minion of bad-ass mutants, plans to inundate the earth in a nuclear holocaust and take over in “X-men: First Class.”

As early as 1944, the Nazis had discovered natural mutants among. In the 1960's, CIA agent Moira MacTaggert (Rose Byrne, "Troy," "Bridesmaids") infiltrates a suspicious gathering at a Las Vegas nightclub and gets an eyeful too. When her bosses don't believe her, she seeks out an expert in Oxford professor Charles Xavier (James McAvoy, "Wanted," "The Conspirator"). With the help of a sympathetic CIA lab head (Oliver Platt, "Frost/Nixon," "2012"), Xavier, who has teamed with Erik Lehnsherr (Michael Fassbender, "Inglourious Basterds," "Jane Eyre") after crossing paths trying to circumvent the nefarious plans of Sebastian Shaw (Kevin Bacon), begins recruiting others like themselves to form "X-Men: First Class." Cowriter (with "Thor's" Ashley Edward Miller & Zack Stentz plus "Kick-Ass's" Jane Goldman)/director Matthew Vaughn ("Kick-Ass") breathes more life into the second Marvel franchise of the summer than the series may have ever had in the first place. This origins story not only serves up the goods, but lines up a fresh cast (fun cameos from Hugh Jackman and Rebecca Romjin aside) that should leave fans wanting more. After establishing the future Magneto's (Bill Milner, "Son of Rambow") awful past where Nazi fascination with his metal bending powers cost his mother's life, the film goes lighter with the twelve year old Charles's (Laurence Belcher) discovery of someone impersonating his mom in the kitchen of his English estate. That, of course, turns out to be Raven and Charles offers her haven. Jumping forward finds Charles a rather smug egghead with a sheaf of pickup lines and Raven (now Jennifer Lawrence, "Winter's Bone") obviously chafing at the sisterly relationship she's been cast in. The Nazi Schmidt, seemingly not having aged a day, has reinvented himself as Shaw and is intent on getting a Russian General (Rade Serbedzija, "Harry Potter and the Deathly Hallows: Part 1") to deliver nukes to Cuba now that he has manipulated American Colonel Hendry (Glenn Morshower, TV's '24') into jockeying one into place in Turkey. Charles discovers his first recruit right in the lab when he and Raven meet scientist Hank McCoy (Nicholas Hoult, "A Single Man"), a brilliant kid with feet that look more like an ape's hands and whose obsession with hiding his mutancy makes for a romantic bond for Raven. He also develops a device which allows Charles to track others of their kind. In a fast-moving montage, Charles and Erik round up Angel Salvadore (Zoë Kravitz, "It's Kind of a Funny Story"), a stripper with wings; Sean Cassidy (Caleb Landry Jones, "The Last Exorcism"), a rejected kid able to emit high pitched sound waves; cab driver Armando Muñoz (Edi Gathegi, "Twilight's" Laurent), an immigrant with a talent for self preservation and Alex Summers (Lucas Till, "Battle: Los Angeles"), a young prison inmate who can radiate missile-like energy. Secured at the CIA, Raven suggests they take on new identities, dubbing herself Mystique - Cassidy becomes Banshee, Muñoz Darwin and Summers, Havok. Then they're paid a visit by Shaw's minions Azazel (Jason Flemyng, "Clash of the Titans") and Riptide (Álex González, "Milk"), capped with Shaw himself whose departure marks the death of one of the newly recruited. As they gear up for war, the age-old XMen conflicts - being true to oneself (McCoy goes full Beast in trying to eradicate his external otherness) and fighting for the good of all men or rejecting the less than understanding humans. Vaughn's made a much better super hero movie sticking to the comic book tradition than he did with the deconstructive "Kick-Ass." He keeps multiple story strands and relationships within a huge cast of characters easy to follow, using montages with wit (like the inevitable training scenes). Action sequences feature an underwater-ski with Smith's sub (interior decorated like something out of a 60's Bond movie) and same sub being pulled out of the ocean. The film blasts off and never loses it pace. Henry Jackman's ("Kick-Ass") score can be a bit overemphatic. Fassbender's dark seriousness sparks against McAvoy's cheekier group leader and Lawrence plays well between McAvoy and Hoult. The other X's have varying levels of screen oomph. If there is one major failure in the cast, it is January Jones's (AMC's 'Mad Men') Emma Frost. The effects which turn her into diamond are nice but she sucks the air out of any scene she's in. Look for character actors Matt Craven, James Remar, Ray Wise and Michael Ironside sprinkled throughout. Jackman's one short line is a hoot. "X-Men: First Class" is the best "X-Men" movie yet and Marvel is having a great summer.

We are all familiar with the “X-Men” franchise that has cranked out sequels to the original every few years since 2000 with, to me, diminishing returns. In this fresh spin on the X-men’s origins, though, the filmmakers, led by helmer Matthew Vaughn, re-launch the series and make this prequel brand-spanking new. It has been so long since I actually watched an X-men movie and, I have to admit, I forgot more about them than I remembered. This well-done addition to the X-Men list brings us the younger versions of Professor X and Magneto as they develop their unique skills and powers. Charles grew up and developed his telepathic powers in elegant comfort in England. Eric (Michael Fassbender), on the other hand, was born Jewish in Nazi Germany and, as a boy, became the laboratory rat for evil Nazi doctor Klaus Schmidt (Kevin Bacon). Schmidt was experimenting with the powers of the mind and body, creating mutant Eric. Eric has the power to move, bend and break metal with magnetic force. Flash to 1962 and the US is in the beginning stages of the Cuban Missile Crisis. Schmidt has become Sebastian Shaw; a megalomaniac mutant who can absorb the kinetic energy of all weapons fired against him and uses it to become the strongest and fastest mutant. He heads the Hellfire Club, a collection of mutants with incredible destructive powers, and instigates a plot to install American Jupiter ballistic missiles in Turkey to force the Communist Russians to their own nuclear weapons deployment – to Cuba. That is the overall synopsis of the “big” story. While Shaw’s machinations move the world to the brink of nuclear holocaust, Charles is recruiting and training mutants of his own, including his shape shifting stepsister Raven (Jennifer Lawrence), and getting them all ready for the upcoming battle royal against Shaw and his Hellfire mutants. Xavier crosses paths with Eric, who is now an avowed Nazi hunter and killer and he wants to destroy the man responsible for his mutation and lifelong misery. Charles convinces the loner to join forces and destroy Shave and his plans for mutant world domination. The fifth film in a franchise is usually thrown together to take advantage of the brand name and things like story, acting and production values suffer for it. With “X-Men: First Class” we get something more akin to J.J. Abrams’s 2009 reinvention of the decades-running “Star Trek” franchise. We know most of the main characters but, here, we meet them in their formative years. The screenplay, by producer and franchise originator Bryan Singer and slew of writers, is a tightly woven tapestry that turns its focus to the many characters. Each gets his due and this helps bring together this large ensemble cast, led by McAvoy and Fassbinder. It does not hurt to have Kevin Bacon on hand to twirl his metaphorical mustache. The story deals with the fears and mistrust of those volatile years in the 1960s and plays on our current fears and mistrusts in this, our equally volatile age. This makes “X-Men: First Class” a timely reinvention for a franchise that needs rejuvenation. Matthew Vaughn and his crew handle the behind the camera duties – production design, art direction cinematography, costume, special effects (some of the best I have seen recently), music and editing – smoothly and seamlessly, as do the actors in front of the lens. This rarity in prequels and sequels – a film that makes you want the next chapter of the “First Class” to be made – is going to be huge at the box office. I am glad to say, this one deserves it. And, you do not have to pay 3D prices!