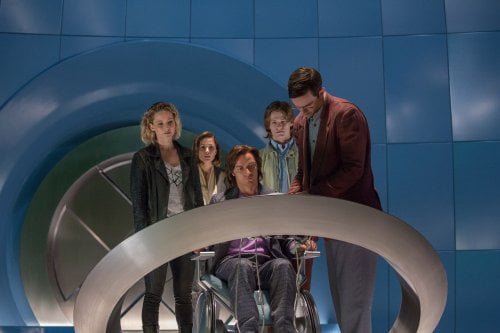 Thousands of years ago, the world’s first mutant, En Sabah Nur (Oscar Isaac), was trapped beneath a pyramid by rebels and he has lain dormant for millennia. Reawakened now, he wields his god-like powers and begins to assemble a force of mutants. His mission is to topple the world’s superpowers and bring upon the “X-Men: Apocalypse.”

In ancient Egypt, the transference of the mutant Dark Lord Apocalypse (Oscar Isaac, "Star Wars: Episode VII - The Force Awakens") to his newest incarnation is interrupted by a rebellion. The pyramid comes crashing down, burying him. But in 1983, he is set free and, angered by what he finds and empowered by all the mutant powers he's acquired, gathers Four Horsemen - Magneto (Michael Fassbender), Psylocke (Olivia Munn, vacant), Angel (Ben Hardy) and Storm (Alexandra Shipp, "Straight Outta Compton") - to destroy the earth and begin anew in "X-Men: Apocalypse." Producer/director Bryan Singer ("The Usual Suspects") and writer Simon Kinberg were on a real roll with the previous two installments of the X-Men series ("First Class" and "Days of Future Past"), but this latest chapter, which introduces fledgling versions of Storm, Jean Grey (Sophie Turner, HBO's 'Game of Thrones') and Cyclops (Tye Sheridan, "Mud"), emerges from a well run dry. While there are small pleasures, like the genesis of Storm and Nightcrawler (Kodi Smit-McPhee, "The Road"), as super hero franchises glut the market we need more than groups of mutants battling amidst CGI mayhem. As Raven/Mystique, Jennifer Lawrence's enervated performance says it all. While comic book fans may know all about Apocalypse, we get little back story on him here (he was featured in "Future Past's" stinger). There is more ingenuity in the film's opening credit sequence, which spirals us through the ensuing historical evils of man, than in the rest of the film. It's ten years after "Future Past" and Professor Charles Xavier (James McAvoy) and Hank McCoy (Nicholas Hoult) are welcoming Scott Summers to their school for the gifted, the young man struggling to control his powers, as Jean Grey suffers from visions of mass destruction. Erik Lehnsherr has been hiding his powers in Poland, living with his wife and (gifted) child until he's outed, his family destroyed. Raven is a loner helping mutants around the world (she rescues Nightcrawler from a Berlin cage fighting club). Once these forces have gathered and drawn their battle lines, however, it's pretty much business as usual. Quicksilver (Evan Peters) gets a weaker repeat of his 'Time in a Bottle' scene, this time to 'Sweet Dreams (Are Made Of This).' The beginning of the Jean Grey/Cyclops/Wolverine triangle has little heat, largely due to Turner's limp interpretation of her character. The destruction of Cerebro sucks Professor X into direct mindfight with a giant Apocalypse that feels warmed over from "Future Past's" prologue. Moira Mactaggert (Rose Byrne) has a sentimental return It really is fun to see Storm as a scruffy thief taken from the streets of Cairo and Nightcrawler and his snappy disappearances have been beautifully realized. But many of the other characters are just so much background, never really coming to life. Fassbender's more interesting hiding Erik's powers than utilizing them, McAvoy loses his hair and Jennifer Lawrence has never been less invested. "X-Men: Apocalypse" is all Sturm and no Drang. Grade:

For fans of the Marvel universe, I guess this is a highly anticipated entry into the X-Men franchise. But, for me, a person who can barely tell Professor X from Magneto, it is all a bunch of noise and too many characters to keep track of. As such, I am probably the wrong person to review a film like “X-Men: Apocalypse.” Similar to “Captain America: Civil War,” this action packed third installment of the second reboot of the X-Men (I fear we have more in store) has the flash and dazzle the fans love. The story, like “Civil War,” pits the good mutants (AKA superheroes), led by Professor Xavier (James McAvoy), against Apocalypse and his team of bad mutants as the self-appointed god lays waste to the Earth. Apocalypse’s powers come through transference of the individual powers of other mutants to himself, gaining extraordinary forces unequaled by even Professor Xavier. So, we have a story of a megalomaniac unleashing his fury on the human world. We also have the battle between good and evil mutants (guess who prevails). With so many characters and side stories, the uninitiated need a score card to keep track of who is who and what are their mutant skills. The special F/X are many and thrown at you frequently, which is a good thing since the film pushes the two and a half hour runtime. This is way too long for a non-fan but is good for the superhero universe enthusiasts, if audience reaction is an indication. And, I only checked the time five or ten times as I slogged through “X-Men: Apocalypse.” Usually, its more. That’s high praise for a guy who does not give a hoot about the franchise.