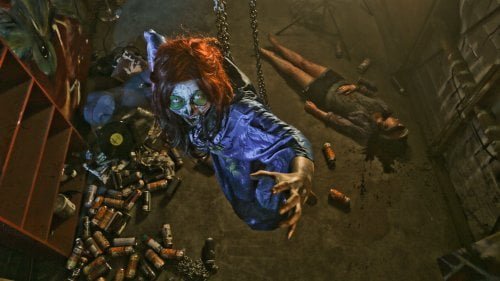 The zombie apocalypse has struck the world with a vengeance and the survivors must face flesh-eating walking dead. But, a team of armor-suited, gas-masked soldiers are abducting survivors for the experiments of a mad, mad scientist, making survival twice as hard in “Wyrmwood.”

Geared up in homemade armor paying homage to Ned Kelly by way of post-apocalyptic Mad Max, a group of Aussie men take out a zombie horde. Elsewhere, in ignorant bliss, Brooke (Bianca Bradey) and Sherri (Sheridan Harbridge) conduct a photo shoot in a garage, but their artfully made up model suddenly turns monstrous. Climbing onto an overhead beam, Brooke witnesses Sherri taken down and makes a desperate call to her brother Barry (Jay Gallagher) to come and save her in "Wyrmwood." Cowriter (with producer brother Tristan)/director Kiah Roache-Turner exhibits a real talent for highly charged genre cinema with this gory, world-gone-mad zombie flick, a movie that had me thinking it'd bested the likes of "28 Days Later" until fatigue sets in its latter half. Still, this wildly inventive, blackly funny horror flick is above average fare and quite the calling card for these filmmaking siblings. Brooke's introduction is a nice bit of horror, Roache-Turner towing Hitchcock's line regarding the rules of suspense. Makeup effects done for the photo shoot add a monstrous animation (the likes of which I haven't seen since David Bowie's long form Blue Jean video) to the newly turned zombie who snaps and snarls like a Tasmanian devil suspended in chains. When we revert back to Barry as he sets off, he informs his buddy 'This morning I shot my wife and child with a nail gun.' We're in for some nasty business. Before Barry arrives though, Brooke thinks some military men who arrive are there to save her. Not so, but just what are they involved with? A rape ring? Turns out to be something far creepier when she comes to to find herself chained to the wall of a trailer lab where some kind of demented scientist is injecting subjects with infected blood (and just wait until you hear what's behind all this). But the Roache-Turners are smart enough to also inject their film with some pitch black humor. Indigenous Australian Benny (Leon Burchill) bursts on the scene by blowing the head off of Barry's buddy, mistaking him for walking dead, then inquiring if he's OK. The new team pair up and make a startling discovery about how to fuel the remainder of their journey as the biblical implications of the movie's title come into play. While their are some hiccups (obvious stunt doubles, for example), for the most part "Wyrmwood" is a marvel of practical effects, kinetic editing, jarring sound and great music (KC and the Sunshine band's 'Get Down Tonight' hasn't been this effective since "Sid and Nancy"). There's an "Evil Dead" homage and plenty of humor derived from the Aussie setting (although a big opportunity for a boomerang gag was missed). And while the film bogs down a bit as it shifts gears to wrap, "Wyrmwood: Road of the Dead" is still one heck of a trip. Grade:

I expected a run-of-the-mill zombie flick ala the “Living Dead” movies or television’s “Walking Dead.” “Wyrmwood” does the normal survivors versus mindless, relentless monsters shtick but twists it with the crazy insane doctor (Berynn Schwerdt) whose henchman seize Brooke (Bianca Bradey), a young woman who seems immune to the human-destroying zombie virus. Brooke’s brother, Barry (Jay Gallagher), has his own set of problems when his wife and daughter suddenly turn and he must dispatch them with his nail gun. His is not just a mission of survival, it is also one to find and save Brooke, though he knows nothing of her plight. He teams up with another survivor, Benny (Leon Burchill), and they arm up to take on the zombie hordes. The story divides its time fairly equally between Brooke and Barry. Brooke’s dilemma is more surreal as the Mad Doctor takes his captive and injects her with fluids from restrained walking dead. But, his experiment backfires as the young woman goes through a metamorphosis that I will leave unsaid. This is where “Wyrmwood” takes a different tack from the norm and explores a demented angle with the mad scientist and his experiments in his blood-splattered laboratory. “Wyrmwood’s” gore follows convention and, though excessive for the squeamish, will please the fans of this popular horror genre. It is from the hands and mind of its tyro director, Kiah Roache-Turner, who co-wrote the screenplay with Tristan Roache-Turner, but also is credited as editor, producer, visual effects, camera, production design and sound design, making for a one-man production. It is a creative piece of filmmaking that should strike a chord with the zombie lovers everywhere.