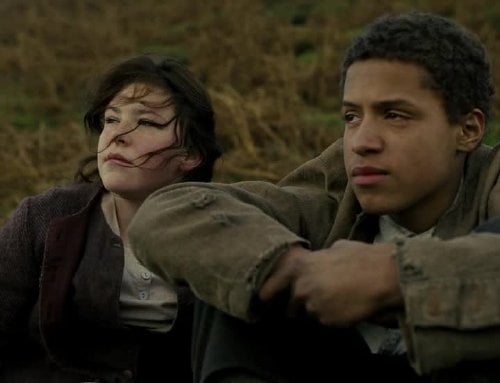 When her father returns from Liverpool with a young black boy he found living on the streets, Catherine Earnshaw (debuting Shannon Beer younger, Kaya Scodelario, "Moon") finds him so repellent she spits in his face. But the boy who's christened Heathcliff (Solomon Glave younger, James Howson, both debuting) forms a fast childhood attachment to the wild Cathy. Once her father's dead and jealous older brother Hindley (Lee Shaw) takes charge of the farm, though, Heathcliff is abused as a laborer. Then the cultivated Linton family move into the Grange and Heathcliff realizes that if he will ever have his Cathy he must first prove himself by leaving "Wuthering Heights."

Cowriter (with Olivia Hetreed, "Girl with a Pearl Earring")/director Andrea Arnold ("Red Road," "Fish Tank") adapts the Emily Brontë novel with a fresh spin that, ironically, is perhaps the first to fully articulate Brontë's world without much in the way of dialogue. This stunning work may frustrate some with its insistence on making nature a major character, like a Terrence Malick approach with a Werner Herzog sensibility, but Arnold is showing that Cathy is tied to the land and that that land, which Heathcliff also comes to love, is both beautiful and cruel, serves life yet proffers death. Her decision to make Heathcliff a black boy adds another layer to the foreignness of his point of view (which is ours throughout the film), his exotic erotic appeal and his class disadvantage, one which could easily resonate in today's Britain. The inexperienced Shannon Beer isn't the cliched beauty one would find in William Wyler’s 1939 version with its Hollywood studio gloss and miscast Heathcliff, but instead a sly creature of unruly hair and stormy eyes. She first connects with her father's protege by teaching him about native birds with the feathers she's collected, then bareback on the horse he's given the lad first choice in picking from a pair. They're a natural pair, as can be seen when Heathcliff rejects the Baptismal font in terror, running off with Cathy for a literal roll in the muck of the moors. But the Christian influence of father Earnshaw ends here as well and Hindley immediately settles in for retribution, moving Heathcliff in with the animals and forbidding him to speak to his sister. (Arnold parallels the young couple's mud-soaked mischief out on the windy, daylit moor with Heathcliff's cool observation of Hindley rutting with his future wife Frances (Amy Wren) in darkness amongst farm animals, a neat metaphor.) Everything changes yet again when Cathy urges Heathcliff to go investigate the new occupants of a manor house only to have dogs sicced on them (birds, dogs, horses, etc., all have their symbolic place). She's accepted in by the Linton family who care for her injury, and the taste of civilized finery turns her head. Cathy still defends Heathcliff against cruelty, but he seethes as she's wooed by the imperious Edgar Linton (Jonny Powell, later James Northcote) and when he overhears her rationalizing with houseworker Nelly (Simone Jackson) about accepting Edgar over her true heart's desire, Heathcliff disappears. Unfortunately, upon his return, almost all the major players are replaced by new actors and something's lost. Where Glave had a delicate beauty, Howson looks more 70's American radical and Scodelario is more traditionally beautiful and refined looking where Beer was more uniquely compelling. The passion plays out, Cathy's desire for her childhood friend an affront to her husband while Heathcliff's new, learned cruelty causes him to use Edgar's infatuated sister Isabella (Nichola Burley, "Donkey Punch") like a sexual pawn. In the end, a death foreshadowed brings on a necrophilic display of grief that will turn off some, but Arnold, and Howson, imbue with an extreme gothic romanticism. A coda often played supernaturally finds itself again in nature. Normally such a bleakly majestic landscape would demand a widescreen approach, but Arnold and her cinematographer Robbie Ryan ("Red Road," "Fish Tank") imprison her characters in a 1.33:1 aspect ratio, also reflected in rain streaked leaded glass window casements and Cathy's earthen grave. There is no score, instead French sound designer Nicholas Becker, who debuted scoring Arnold's "Red Road," creating a soundscape from nature (Mumford & Sons 'The Enemy' plays over closing credits and if there is any justice will be recognized for the perpetually unoriginal Original Song Oscar.) The adapted screenplay, which relies far more heavily on visuals than words to tell this classic tale, is also a bold original. "Wuthering Heights" is a dark tale of class and passion and unrequited love fairly curdled into anguished hatred. It pulsates with life as it descends into madness and death. Somehow, I think Kate Bush would approve.