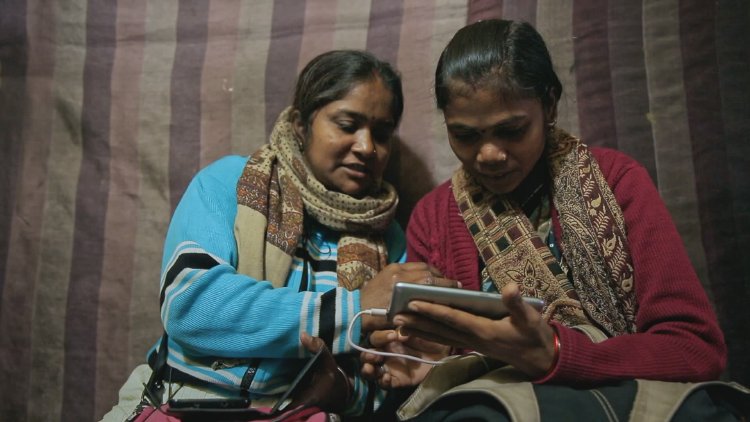 In India, life isn’t easy for the Dalit caste otherwise known as the ‘untouchables.’  It’s even more difficult for women in this group, but Meera Devi has nonetheless managed to get a formidable education, with degrees in both political science and teaching.  As the chief reporter for Khabar Lahariya, she not only mentors younger women, but leads their newspaper into the digital age where their journalistic voice grows ever more powerful “Writing with Fire.”

The women celebrated in this film are so impressive, one wonders if they made this documentary themselves, but that authorship belongs to the husband and wife team of  Sushmit Gosh and Rintu Thomas, who make their feature documentary debut with this Oscar nominated film.  And while “Writing with Fire” is an insightful and inspiring analysis of grassroots journalism succeeding in spite of such obstacles as reporters having no electricity to charge the smartphones they’ve learned to work with, it has the added subtext of watching the authoritarian rise of the Modi regime through the eyes of these reporters, whose home state of Uttar Pradesh is considered the most politically influential in India (and the most dangerous for journalists).

The first bit of investigative journalism we witness is Meera following up on a horrific story of a Dalit woman who has been raped repeatedly, every time her husband is not at home, who claims the police refuse to lodge a complaint.  Meera’s polite but pointed question of the local police chief clearly makes him squirm.

Meera tells us she believes journalism is the essence of democracy, but in her country it has always been equated with a high caste man.  She then plunges into a class on how to use a smartphone with a group of women, some of whom take to it easier than others (Meera’s suggestion on how to make a shot better will be paid back in spades by young Shyamkali, as will her patient explanation of how to find a story angle).

We will see one example after another where the stories reported by Khabar Lahariya result in government action, whether it be paving a road or getting electricity connected.  Suneeta, a natural before the camera, goes after the illegal mining practices which have destroyed her village, reporting that carries great danger.  It’s picked up by national media.  We watch as their YouTube views spike into the hundreds of millions well after Meera’s husband opined Khabar Lahariya didn’t stand a chance when big media companies were shutting down.  Meanwhile Suneeta, Meera’s most successful protégé, is being pressured into marriage lest she dishonor her family (as a single working woman).

Most disturbing is witnessing candidates and followers of Modi’s SJP party, one of whom Meera continually hammers on the issue of rape – his answer?  It will no longer be an issue when the SJP is in power, the same laughable ‘reasoning’ used by Texas’s Republican Governor Abbott.  Even worse is the influence we see build behind one young man sent in to lead a Hindu Youth Brigade, a man who uses religion to justify violent nationalism (sound familiar?).

The Meera we witness at the end of the film is swarmed by cheering Modi supporters, worried that Khabar Lahariya’s work to inform the public is being ignored by youth addicted to Facebook and WhatsApp.  A female journalist, Gauri Landesh, was assassinated after criticizing the BJP’s Hindu nationalism.  But Meera carries on, promoted to Bureau Chief while Suneeta, who left to get married, returns to her own show and a speaking engagement in Sri Lanka.  ‘We continue to hold a mirror to society,’ Meera tells us.  The reflection is becoming increasingly ugly, making the women of Khabar Lahariya all the more essential.

The Khabar Lahariya is the only newspaper in India to be run totally by woman, some very special women. They are all members of the Dalit caste of that country, better known to us as outcastes. Now, after 14 years of print journalism, the paper’s all-femme staff makes the leap to the digital age and smart phones for “Writing with Fire.”

I have always had a soft spot in my heart for movies about journalism and newspaper reporters, whether fact or fiction, from “The Harder They Fall (1956) and “All the President’s Men (1976)” to “Spotlight (2015).” But, I cannot think of one with a more unique hook to grab your attention than “Writing with Fire.”

Just think about it. A group of Indian woman at the very bottom of the country’s social caste system starts a newspaper by Dalit women telling the real news of India, even if it is dangerous, even deadly. These are women who do not take “no” for an answer and are not afraid to ask the tough questions. In one instance, when they demand an answer from the chief of police on a rape case, the official response was that the rape was just “silly mistakes by boys.” The reporters for the Khabar Lahariya do not take this as a just or fair answer.

I have always admired (mostly) the members and work of the Fourth Estate and the dedication (again, mostly – Fox, OAN and Newsmax, you know I am talking about you) they have to report the truth. “Writing with Fire” tells the story of the best example of people fighting for that truth.

Music Box Films released "Writing with Fire" into select theaters beginning in November of 2021 and it makes its television premiere on PBS’s Independent Lens on 3/28/22.  The film will be released on DVD on 4/26/22.