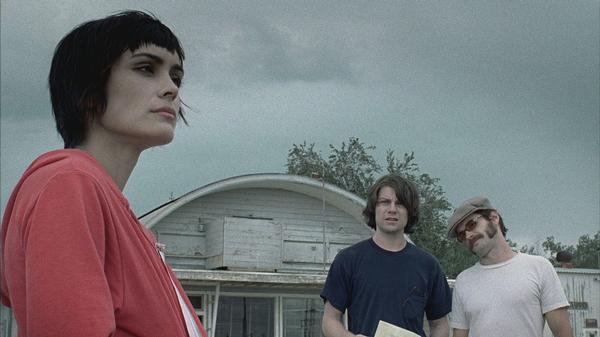 Zia (Patrick Fugit, "Almost Famous," "Saved!") cannot get out of the funk he's in since breaking up with girlfriend Desiree (Leslie Bibb, "Talladega Nights: The Ballad of Ricky Bobby"), so he cleans his tiny apartment, then slits his wrists, then comes to to find himself in a dingier version of his place with a bossy Austrian roommate and a dead end job. When he discovers Desiree also committed suicide, he hopefully persuades his Russian rocker buddy Eugene (Shea Whigham, "All the Real Girls," "First Snow") to hit the road in hopes of finding here in "Wristcutters: A Love Story."

Writer/director Goran Dukic adapts the more nimbly titled short story "Kneller's Happy Campers" into a film that's fairly unique if a little muddled delivering its message. Although it runs out of steam in its last act, blunting its overall impact, this is one that earns its quirks, derived from sources as diverse as "Beetlejuice" and "The Hitchhiker's Guide to the Galaxy." Zia slips into his newly desaturated world hanging out at a local bar. A group of women lead him into a 'game' of asking strangers how they off'ed themselves, a preoccupation Zia finds rude, but one which yields some fascinating stores. He clicks with the Russian Eugene after a funny and absorbing tale of how Eugene's whole family now lives in suicidal after life. Eugene himself ended a live performance by going out on a blaze of glory. Listening to cassettes of Eugene's old band (actually Gogol Bordello), Zia and Eugene set out to find Desiree in Eugene's battered old car with its black hole beneath the passenger's seat (Zia loses a tape, then several pairs of sunglasses to this strange phenomenon). They pick up hitchhiker Mikal (Shannyn Sossamon, "A Knight's Tale," "The Holiday"), a gorgeous brunette who insists she is there by accident and is determined to find the People In Charge (PIC) and be returned to life. They join camp with Kneller (Tom Waits, "Coffee and Cigarettes"), a man who seems to hold some answers, and his cronies, after finding Yan (John Hawkes, "Me and You and Everyone We Know," HBO's "Deadwood") floating in the air. By the time the self-proclaimed Messiah (Will Arnett, "Blades of Glory," "The Brothers Solomon") arrives, accompanied by convert Desiree, Zia realizes he has found someone else in his search for her. Dukic's created an after life that certainly discourages offing oneself with its desaturated hues and broken down objects, but its politics don't quite jibe. The Messiah's ruse to bring in the PICs is opaque at best (although it serves the plot) and its love story is at logistical odds with the film's message of appreciating life. Still, the road trip that brings it up to this point is enjoyably odd, as is its huge ensemble cast. Fugit's "Almost Famous" wide-eyedness has matured, making him a more seasoned observer for life after death and Sossamon's exotic beauty is highlighted by the dim surroundings. Whigham is an endearing hoot and it is a pleasure to see so many interesting character actors - Abraham Benrubi, Mark Boone Junior, Jake Busey, Mary Pat Gleason, Irwin Keyes - make an impression in small roles. "Wristcutters: A Love Story" works best in establishing its characters and setting them in a fantastical, depressed yet hopeful setting. It's uneven story pulls it back to earth, but many of its ideas are transcendent.