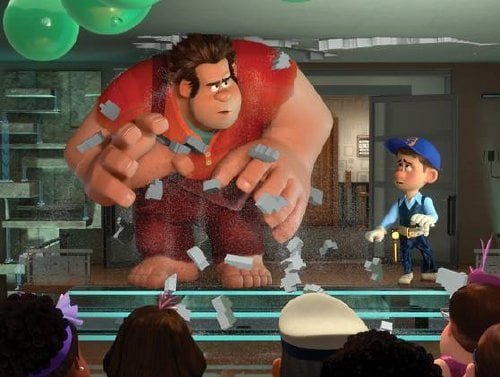 After hours at the video game arcade, all the games' characters can socialize, even visit other game worlds via their electronic wiring connections. There's a celebration going on in Fix-It Felix Jr.'s world for the 30th anniversary of their game but one of their most important elements has been ostracized, their bad guy "Wreck-It Ralph."

Walt Disney Studios tries to recreate Pixar magic with this tale of a video game villain gone rogue to become a hero, but despite some great vocal performances, the story (screenplay by Jennifer Lee and Phil Johnston ("Cedar Rapids") is the same old redemption tale and the visuals lack magic. Those who've played and programmed the games over the decades will find some fun with in-jokes involving the likes of Pac-man and Q*bert but anyone else over the age of ten will likely be bored. Ralph (voice of John C. Reilly) is a giant with a huge head and gorilla forearms busting out of his overalls. He spends his days wrecking an apartment building while handyman Felix (voice of '30 Rock's' Jack McBrayer) runs around fixing it with his magic hammer. The apartment dwellers look like Playskool Weebles (their animated movement is one of the film's highlights). At night, Ralph is left to sleep in a dump. When he's not invited to his group's party, he leaves and joins Hero's Duty where fighting cyber-bugs can earn him a medal. He gets his medal, but he's no hero and his exit wrecks havoc, allowing cyber-bugs out to spread virus to other games. Wreck-It Ralph will have to prove himself in Sugar Rush, where his meeting with a glitch, Vanellope von Schweetz (voice of Sarah Silverman, the cast standout), will form a winning partnership as he helps her build a car and get into her game's race. Meanwhile, Fix-It Felix Jr. has had the dreaded 'out of order' sign plastered across its screen because of Ralph's absence and cyber-bug battler Calhoun (voice of 'Glee's' Jane Lynch) has followed Ralph to keep the malicious bugs from swarming throughout Candyland. Sure, it's amusing to see video game relics in bad guy group therapy and Q*Bert begging in Terminal Station as an 'unplugged game,' but most of the humor in Wreck-It comes in the form of puny puns like the Nesquick sand Ralph and Vanellope find themselves in. (Vanellope also gets too much mileage out of turning 'Duty' into 'doodie'). The film's best line goes to Sugar Rush's King Candy (voice of 'Suburgatory's' Alan Tudyk) when he reports after a fired shot that 'he just glazed me.' Reilly gives an appealing, big-bodied warmth to Ralph and McBrayer is well typecast as a fussy do-gooder. Silverman gives Vanellope a welcome cheeky edge to her sweetness and Tudyk's underhanded King is cartoony plumminess. Jane Lynch gives a good line read, but there's no mistaking her, no spin of any kind on the character. Other characters are voiced by Mindy Kaling, Dennis Haysbert, Ed O'Neil and Edie McClurg. The height of technological achievement for this movie's games is to be HD, so setting these very 2-dimensional game worlds in 3D is puzzling and adds nothing to the experience. Animators have given different looks and feel to the three major games, with Ralph's home very geometric, Duty all glorified hardware and Sugar Rush a candy store/bakery mashup which eventually grows tiresome.