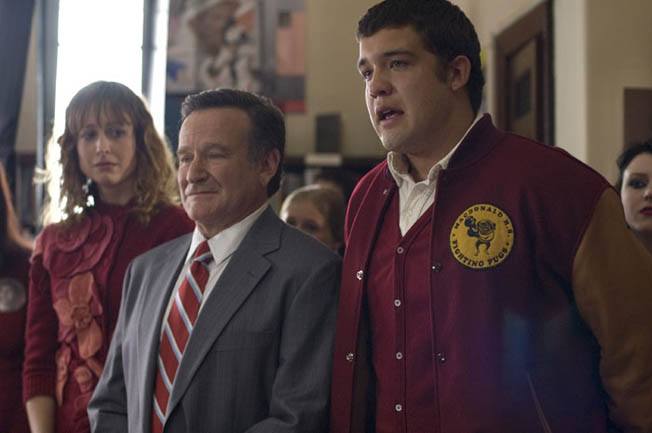 Lance Clayton (Robin Williams) has always dreamed of being a famous novelist, but in late middle age he's only made it as far as teaching a poorly attended high school poetry class. He is dating the adorable and much younger art teacher, Claire (Alexie Gilmore, "Descent"), but she wants to keep their relationship secret. His teenage son, Kyle (Daryl Sabara, "Keeping Up with the Steins," "Rob Zombie's Halloween"), wants nothing to do with him and everything to do with sex, especially the perverted kind. But when the worst thing possible happens to Lance, suddenly he finds that he has become the "World's Greatest Dad."

Writer/director Bobcat Goldthwait's first film, "Shakes the Clown," was set in the fringes (famously tagged by the then Boston Globe's Betsy Sherman as 'the Citizen Kane of alcoholic clown movies'). His last film, "Sleeping Dogs Lie," was the notorious Sundance hit about a woman who tells her fiance she did a sex act on her dog. It didn't get much of a release, but it was nowhere near as salacious as its reputation, instead a rumination on just how much of ourselves we should reveal (and somewhat similar to Kevin Smith's "Chasing Amy," on a lesser scale). His latest shows maturation as a filmmaker, although Goldthwait seems unable to disentangle himself from the seamier aspects of the human condition. Kyle (one of the twins who portrayed "Murphy Brown's" baby!) is such a nasty excuse for a human being, it is difficult to understand why his father persists in getting through to him or why he even has the one best friend he has - Andrew (Evan Martin), frankly, seems repelled by him. But the film is not about Kyle, per se, but his father Lance and Goldthwait has given Williams one of his better roles in quite some time (not that Williams does anything particularly notable with it, although the performance is solid and he engenders sympathy, an important element of making the movie work). Goldthwait takes a double pronged approach to the concept of celebrity death - and who knew how timely his subject would become - by looking at how society leaps to put those who die unexpectedly on a pedestal while their inner circles seek to profit. His screenplay is layered, as Lance's actions have a ripple effect - his opportunistic girlfriend suddenly goes public; his rival, creative writing teacher Mike Lane (Henry Simmons, "Madea's Family Reunion"), puts on a brave face as his students defect; and students who hadn't given one of their own the time of day (rightfully so, as depicted here) not only begin to hero worship but start cottage industries with t-shirts and the like. The uncool, like Lance's favorite Bruce Hornsby, suddenly become hip when given a dead man's blessing. Goldthwait also addresses the specter of loneliness. Lance may not live alone and may have a girlfriend and colleagues, but he doesn't find joy until he sheds all of them. Only the long-faced and equally lonely Andrew, who lives with an alcoholic mother (not a clown as far as we are told), recognizes something in Lance both before and after the big event. With Lance's next door neighbor Bonnie (Mitzi McCall, "The Cry Baby Killer"), a recluse with a hoarding problem, Goldthwait instructs us to open our eyes as deep-seated friendships may be where we least expect to find them. (In a more subtle note, we are warned to be careful what we say to each other as last words are often not recognized as such.) Williams is understated throughout and paints differing layers of grief (we never do learn what happened to Kyle's mom). It's one of his thin-lipped performances and it's a relief just to see him drained of energy for once. Daryl Sabara bravely creates an ugly, selfish character, a son even his father will admit is a 'douche.' Newcomer Evan Martin is sadness personified, and the kid has a canny knack for investing confusion with insight, perhaps the ultimate teenaged condition. Alexie Gilmore is a cartoonish character, her agenda easily readable to anyone willing to look for it and Geoffrey Pierson ("Changeling," "Get Smart") chooses the apt flip-flop of a politician as Principal Anderson. Jack Nicholson's daughter Lorraine ("The Princess Diaries 2: Royal Engagement") and Ellie Jameson become a mini "Dead Poet's Society" of rivalling idol worshippers as high school types the goth chick and the teacher's pet. Zach Sanchez is believable as Peter, a football jock inspired to come out of the closet. Technically the film shows budgetary restraints, but it is more imaginatively shot and more professionally lit that Goldthwait's last film. "World's Greatest Dad" creates comic moments from a very bleak and unique concept. It's an original indie that could have used more development for its cathartic ending, but Goldthwait is showing real evolution as a filmmaker.