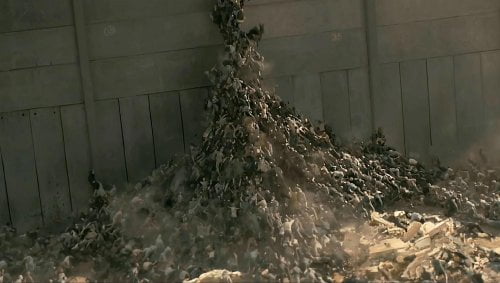 When a zombie pandemic breaks out, former UN investigator Gerry Lane (Brad Pitt) is asked to leave his family and return to duty. Gerry makes the difficult choice and begins to travel the world, interviewing those who have fought the battle in order to determine the cause of the virus that has engulfed the globe in "World War Z."

Max Brook's (son of Mel) book was a taut piece of work which examined the socio-political ramifications of a global zombie outbreak, a series of interviews with those around the world who had fought and survived. Producer Brad Pitt went through a slew of rewrites (currently credited to Matthew Michael Carnahan ("Lions for Lambs"), Drew Goddard ("The Cabin in the Woods") & "Star Trek: Into Darkness's" Damon Lindelof) trying to adapt it for the screen and still he and director Marc Forster ("Monster's Ball," "Quantum of Solace") endured a famously fraught production, jettisoning the entire last act with new reshoots (what appears to be some of the original ending is shown in brief snippets in a montage near film's end). So, how is it? A fair amount of hate's been directed at the movie, but it's actually a decent thriller, hewing more closely to its origin than I would have expected, despite the fact that the last two major set pieces are original to the film. One thing Forster's done well is convey the sheer speed in which a major city can be brought down by the undead. The virus spreads in leaps and bounds, just the way these undead can move. Of course, the decision to convert all this to 3D simply means that many of these quick moving action scenes become a chaotic blur - better to forgo the gimmick that really just detracts here. Gerry, who intends to use former boss, UN Deputy Secretary Thierry Umutoni (Fana Mokoena, "Hotel Rwanda," "Machine Gun Preacher") to get his family to safety, learns aboard the aircraft carrier they're piloted to (after spending a harrowing night in an overrun Jersey tenement) that only essential personnel can remain aboard - he has to leave his family to save them. As the first mention of a zombie was in an email from Camp Humphries in South Korea, which has since gone dark, Gerry will accompany Dr. Andrew Fassbach (Elyes Gabel, HBO's 'Game of Thrones') there, hoping to find patient zero. What they find is eerie and getting out again is tricky, the undead drawn to noise. Gerry travels to the walled city of Jerusalem just in time to see it overrun and lose his transport out. Now traveling with young female Israeli soldier Segen (Daniella Kertesz), whose hand he readily dispatched after a bite, Gerry manages to get aboard a commercial airliner, rerouted to Wales for him to get to the World Health Organization. The investigator has seen and heard things which have given him an idea. "World War Z" is an odd hybrid of genres, but the least might be its horror element. The constant tampering is also evident in details left unexplained, supporting characters left undeveloped (Tomas, the young boy the Lanes adopt in Jersey, shows no signs of trauma after losing his family, then having them come after him), genre tropes (that old inconvenient cell phone ring) and stretched leaps of faith (Jerry escapes a completely grid-locked Philly in an RV). The book's subtext about differing cultural responses, bureaucracy, odd political bedfellows and failures of human nature are also largely left behind, somewhat made up for with global casting and locations. But one cannot deny Pitt's reluctant hero, unwillingly thrust into the most extreme conditions but never failing to take action. There is also undeniable suspense, especially on the plane headed to Wales and in the facility itself, locked down by its own internal outbreak. The film has its own freestanding conclusion, but makes it abundantly clear that there is room for more. "World War Z" arrives on screen with a lot of baggage (Brad Pitt's been making personal appearances at screenings across the country) and it will have plenty of detractors. But despite some problems, I found it better than expected - there might be a way to use that original, unworkable third act after all should a sequel get the greenlight.