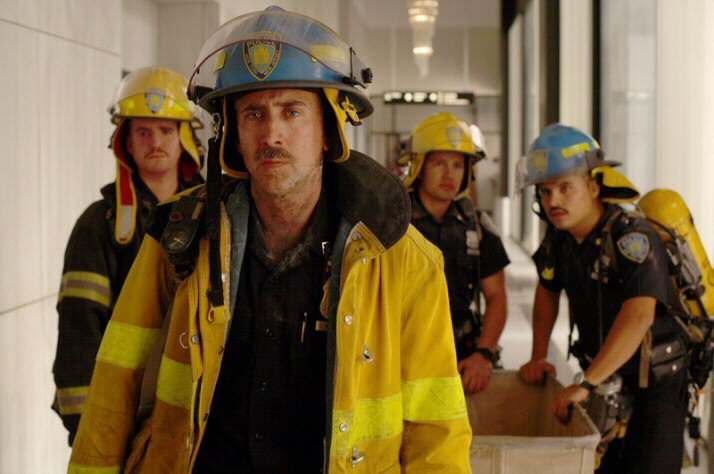 It started out as a bright, sunny and normal late summer day for the cops assigned to the New York Port Authority. But things were about to change for them and the nation when terrorists attacked that icon of America in “World Trade Center.”

On September 11, 2001, Patrol Sergeant John McLoughlin (Nicolas Cage, "National Treasure," "The Weather Man") instructed his squad of Port Authority cops to be on the lookout for a missing little girl thought to be arriving in the city by bus on this beautiful morning. Within the hour, McLoughlin and his newest rookie, Will Jimeno (Michael Peña, "Crash") would be buried alive beneath what used to be the "World Trade Center." Director Oliver Stone's atonement for "Alexander" is a straightforward account of two of that dismal day's only survivors and the torture their families went through waiting to hear of their fates. While it is more emotionally engaging than the vivid but distancing "United 93," it is also a flawed work which may have benefited if the director had taken more of his usual risks. There is no Oliver Stone in "World Trade Center" with the exception of an ill-advised appearance by Jesus Christ in lieu of his usual Indian shaman. Like "United 93," "World Trade Center" effectively portrays the confusion of that morning. A cop is startled by the looming shadow cast by an airliner in a place where it should not be. Officers debate the size of plane that would have made the smoking hole they see on a TV screen. News about a second hit is debated, as are muddled accounts of an attack on the Pentagon. The men from the Port Authority hand picked to report to the WTC gaze from their bus windows in horror at the shattered body of a jumper on the sidewalk. McLoughlin tries to instill some order by giving orders, getting his men to gather the supplies they will need in order to climb into the North Tower to save lives even as other rescuers run towards the South. But McLoughlin and his men never even get to start what they came to achieve. With little warning, the structure begins to collapse and the few who make it to the elevator shaft for protection awaken to find themselves in a hellish tangle of beams, blocks and fire. Writer Andrea Berloff, who used the husband and wife accounts of the McLoughlin and Jimenos families, maintains three closeups throughout the film as she jumps between the men struggling to stay alive and the two families who don't know whether they are dead or alive. There is one other thread worth mentioning and that is the story of Dave Karnes (Michael Shannon, "Kangaroo Jack," "The Woodsman"), a religious and fanatical Marine who decides to take action by traveling to New York to help save lives as a prelude to some vengeful butt kicking. There is also a very weird toss away about some Wisconsin cops who apparently show up at Ground Zero to cook bratwurst. Stone and Berloff cannot seem to avoid all sorts of sharp spikes and the occasional cliche (McLoughlin checks on his sleeping children - aged into their teenage years - before leaving for work) which keep "World Trade Center" from being a better film. No complaints on the performances of Cage and Peña, though, who are very affecting in very tough roles that render them mostly immobile. They make the terror and pain and hope and resignation so very real and their opposite personalities - McLoughlin is quiet and rarely cracks a smile where Jimeno loves to gab - provide a perfect balance. Stone has problems, though, when he switches to the womens' stories. We first meet Donna McLoughlin (Maria Bello, "A History of Violence," "Thank You for Smoking") with two female friends mulling over the breaking news and the scene is thoroughly awkward. Bello's performance gradually gets better, but the decision to turn her eyes blue with contact lenses was a bad one because her eyes are so alien looking in this film that they distract from every scene she appears in. Then there's the usually terrific Maggie Gyllenhaal who got loads of flack for her 9/11 comments at the Tribecca Film Festival premiere of her other 9/11 film, "The Great New Wonderful." Maybe she should just avoid the subject, because her performance as Jimeno's very pregnant wife is overwrought and unconvincing. The only actress of real note here is in a small supporting role as a distraught mother in a hospital emergency room. As the Marine, in the film's truly astounding story, Michael Shannon is so fanatical that there is something creepy about his heroism. Production design (Jan Roelfs, "Alexander") and art direction (Richard L. Johnson, "Road to Perdition," "Ask the Dust") are terrific, the Ground Zero and underground scenes eerily authentic, the cops' homes believably lived in. The score, however (Craig Armstrong, "Fever Pitch," "Must Love Dogs") is too solemn and churchlike, another cliche which should have been avoided. "World Trade Center" is a good movie with a personal take on an American tragedy, but Stone's apparent decision to make the film like a director for hire has rendered it conventional.

This seemed an unusual film for director Oliver Stone to take the helm with its straightforward linear story about two police officers, Sgt. John McLoughlin (Nicolas Cage) and Officer William Jimeno (Michael Pena), the last two survivors found in the rubble of September 11th. Stone is best known for his avant-garde, stylish and decidedly non-linear movies like “Natural Born Killers” and “U-Turn,” so the question was: what would he do in telling the story of two lives hanging in the balance on that fateful day? The answer is: he done good. The Port Authority police have their usual daily briefing held by watch sergeant McLoughlin as they prepare for another uneventful day in the Big Apple. They disperse to their duty stations but are all called back to the precinct for an uncertain emergency. The early reports say that a private plane had crashed into the south tower of the World Trade Center and the PA cops head to the site to help with the evacuation. When they arrive, though, it is obvious that something much, much bigger than a small plane had struck the tower. The police are not prepared for the magnitude of the disaster as, frightened but ready, they move in to assist in the evacuation. Then, the second passenger jet hits the north tower. McLoughlin and his men are in the south tower when the unthinkable happens and it comes crashing down around them. As the rubble settles, the sergeant, Will Jimeno and Officer Dominick Pezzulo (Jay Hernandez) find themselves trapped inside the wreckage of one of the world’s most famous buildings. What follows is a suspenseful true story of heroism and survival as McLoughlin and Jimeno (Pezzulo had died) wait and wait for help to arrive. As the world watches the horrific events and fireman and police from across the nation converge on New York City, the trapped men keep talking to each other. If they stop, they know, they will surely die. The bulk of “World Trade Center” centers, in extreme close-up, on the two cops as they think about their families and plaintively hope to survive their ordeal. Meanwhile, the NYFD and NYPD are doing all they can to find any survivors of the WTC collapse. On the home front, Donna McLoughlin (Maria Bello) and Allison Jimeno (Maggie Gyllenhaal) anxiously await news about their husbands, not knowing if they are safe, injured or dead. Oliver Stone tells all of their stories in a matter of fact way that holds your interest and keeps you in suspense until the very end, even though you know the outcome from the start. Though most of the screen time is on Cage and Pena, Stone does a solid job showing other points of view as Donna and very pregnant Allison agonize over the lack of answers about their husbands. The rescue efforts by police and firemen are also given good shrift and are joined by Army Sgt. Dave Karnes (Michael Shannon) who takes it upon himself to go into the jaws of death to help search for survivors. His heroic effort has a Hollywood-invented feel to it but is, in fact, based on the real mission voluntarily taken on by Karnes. Scripter Andrea Berloff constructs a well-told story, using the true accounts of John and Donna McLoughlin and William and Allison Jimeno, which never lags and keeps the viewer’s eyes riveted to the screen for World Trade Center’s” two-plus hours. The good story is well joined by Stone’s solid directing and fine crafting by the behind-the-camera team joining the helmer. Production designer Jan Roelfs does a creditable job in recreating the chaos and destruction that followed the attack. Lensing, by Seamus McGarvey, is top notch. World Trade Center” gives us a very different cut on the events of that September day in comparison to United 93.” The earlier 9/11 film has the look and feel of a documentary as we watched the inevitable unfold to its gut-clenching conclusion. Stone gives us an old-fashioned suspense story that pays homage to bravery and survival. The end is a foregone conclusion but, even so, the story keeps you on the edge of your seat from beginning to end.