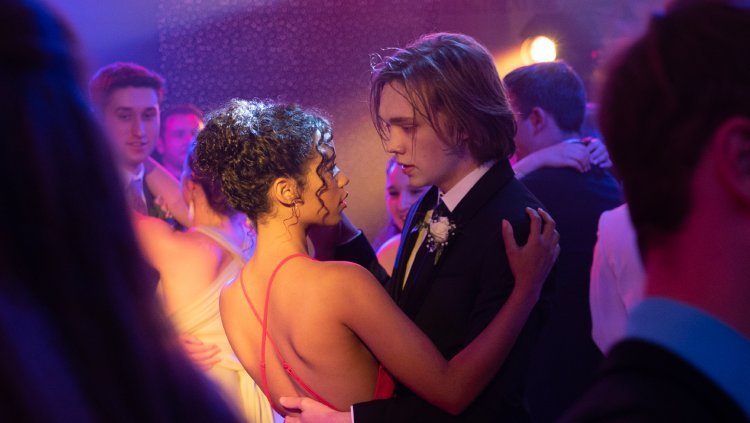 ‘At first they thought it was something wrong with my eyes,’ high school senior Adam (Charlie Plummer, "Lean on Pete") tells us.  His persistent and devoted mother Beth (Molly Parker, HBO's 'Deadwood'), abandoned by his father when the going got too tough, offers constant encouragement as they deal with his resistance to treatment of an incurable mental illness.  When Adam’s secret – schizophrenia – becomes painfully clear during his first psychotic break during chemistry class, he’s expelled, but St. Agatha's Sister Catherine (Beth Grant, "Jackie”) is willing to take him in with strict oversight in “Words on Bathroom Walls.”

YA adaptations (this one by Nick Naveda from Julia Walton’s novel) of teen romances featuring illness usually trod a well-worn path, but director Thor Freudenthal ("Hotel for Dogs," "Percy Jackson: Sea of Monsters"), blessed with a hugely talented lead and exceptional supporting cast, makes a real name for himself here with one that truly shines.  The inventive adaptation (the book is written in diary form) utilizes direct camera address; Adam’s ‘Hallucinations,’ different aspects of his personality represented by Rebecca (AnnaSophia Robb), The Bodyguard (Lobo Sebastian) and Joaquin (Devon Bostick); and limited special effects to get us inside Adam’s head; but it is Plummer’s deeply empathetic performance that is central to the film’s success.

Adam and his mom enjoy a mutually dependent routine, his culinary flair allowing him to take one burden off her shoulders.  But as if Adam weren’t already knocked off kilter, he has to contend with his mom’s new live-in boyfriend Paul (Walter Goggins, "The Hateful Eight"), a man he sees as wishing him out of the picture.  They both accompany Adam to his interview at St. Agatha’s, where Adam watches his Bodyguard flick his cigar onto Sister Catherine’s habit and she becomes engulfed in flames like a portal to hell.  Retreating to the bathroom, he interrupts what looks like Maya (Taylor Russell, "Waves") selling drugs to another student.  Then, on his first day, Maya notices the sushi he’s brought into school and he is so taken with her forthrightness and intelligence, he stops resisting the new drug his mom ‘has a good feeling about.’  His Hallucinations - his hope (Rebecca), fear (Bodyguard) and raging hormones (Joaquin) - flicker and disappear.  Maya accepts a gig tutoring Adam in math (after demanding $200/wk from him, but folding quickly at $75 with his mom), but despite her championing of complete honesty, we can sense she has secrets of her own.  Adam doesn’t flinch when he uncovers hers, but when he begins to encounter side effects that affect his culinary ambitions and stops taking his latest medication, his illness is exposed in dramatic fashion.

The narrative explores many angles and obstacles but avoids feeling overstuffed, instead consequences of the complexities of real life under extraordinary stresses.  The production isn’t over stylized, Adam and Beth’s home moderately middle class.  In addition to his Hallucinations, Adam’s illness is realized with layered sound and effects like the titular writing on a high school’s bathroom walls springing to oversized life or the black wispy smoke that envelops everything when he is most disturbed (the latter is used to best effect as he contemplates the white bassinet that threatens the new arrival of a half baby brother or sister).  The Chainsmokers’ score is complementary without calling attention to itself.

Plummer is quickly becoming a favorite actor of his generation, emotionally tuned in to every aspect of Adam’s life.  He is outstanding, molding his reactions to other players with varying degrees of openness and trust.  Russell, so quiet in “Waves,” is almost pushy here, her unabashed touting of Maya’s intellectual achievements and bluntness with Adam suggesting her own behavioral issues, a neat sleight of hand.  Goggins, too, has to walk a suggestive line which at first makes the actor appear underutilized while the father figure in Adam’s life is filled by Andy Garcia’s delightfully irreverent Father Patrick, who dispenses advice to the non-believer in his confessional.  Parker is in full-on maternal mode, her unconditional love and support for Beth’s son touching.

“Words on Bathroom Walls” is a strange, somewhat unappealing title for a movie in a genre that leans towards saccharine cliché, but trust me, this one really works.