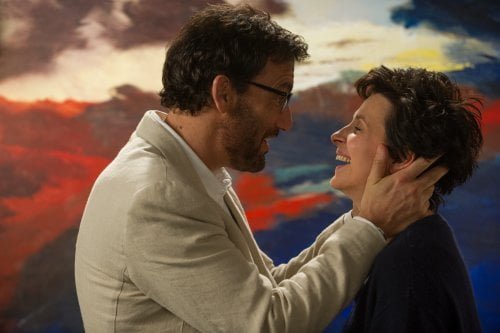 Jack Marcus (Clive Owen) is a burned out English professor who, still, has a passion for words. Dina Delsanto (Juliette Binoche) is an artist suffering from severe rheumatoid arthritis who has come to the prep school to teach and, she hopes, to paint again. The two teachers’ passion for their respective arts leads to a rivalry to choose the best between “Words and Pictures.”

With his job on the line at Croyden Prep School, Honors English teacher Jack Marcus (Clive Owen) uses new Honors Art teacher Dina Delsanto's (Juliette Binoche) class declaration that words are 'traps' and 'lies' to declare war. As the two thrust and parry with lobby displays and hallway exchanges, their students are reenergized, but their personal issues and rocky relationship make it questionable whether both will still be standing for the climactic student debate on "Words and Pictures." Director Fred Schepisi's ("The Chant of Jimmie Blacksmith") latest is based on a script (Gerald Di Pego, "The Forgotten") so literally titled, you may finding yourself quoting shopworn adages in your head well before a character inevitably voices them. The debate at the heart of the film is really only a framework to hang romantic comedy on, but despite some nice literary passages read by Owen and Binoche's own outstanding artwork, dash any hopes for a thought provoking climax. If only Di Pego had thought to slip a copy of Errol Morris's 'Believing Is Seeing' into Marcus's curriculum. It's "Music and Lyrics" by way of "Dead Poets Society." Schepisi's casting and production smarts raise his film from banality, though. Binoche is a marvel playing a painter whose rheumatoid arthritis is curtailing the scope of her art and life. Her personal frustrations have made her a blunt force of a teacher, nor is she easily charmed by Jack's obvious attraction. Owen has his own affliction in the form of alcoholism, one of the reasons dismissal is hanging over his head. It's also driving a wedge into his relationship with his college age son, Tony (Roy Scheider's son Christian in his debut), and provides the not-so-comedic requisite romantic comedy obstacle. There's a subplot among the students that doesn't really add up other than as an illustration of the power of a picture. Schepisi's long time cinematographer Ian Baker uses a clean, bright palette against stark backgrounds to highlight his subjects. Art directors Kendelle Elliott and James Steuart place Dina and the school in light environments, Jack in dark. And lest we not forget that words and pictures do not comprise all of the art world, rock, jazz and classical music are used as emotional undercurrents, work accompaniment (Jack drinks to Bowie - lyrics; Dina works to instrumental) and a bridge between the two protagonists.

My problem with “Words and Picture” is the rivalry that develops between Jack and Dina over which is better, words or pictures. To someone not particularly deft at either, selecting one or the other does not make sense – art is art, whether it be the written word or expressed on canvas. Both are essentially equal, in my mind. The stars do have a lot of chemistry with each other. Clive Owen looks suitable seedy as a writer/ teacher gone to the bottle in frustration over the direction of his life. Owen gives Jack a sad, hang-dog look as he struggles to keep his job at the school. Juliette Binoche is terrific as Dina, showing her struggle with arthritis as she tries to get back her creative ability. They are two lost souls that you root for to be together. There is an inevitability of how things turn out as the honor students, Jack’s and Dina’s, compete to have their works on display for the big rivalry. It turns out as expected with everyone in harmonious unity in the end. It is a nice story that benefits mostly from its stars and a feel good attitude to the arts.