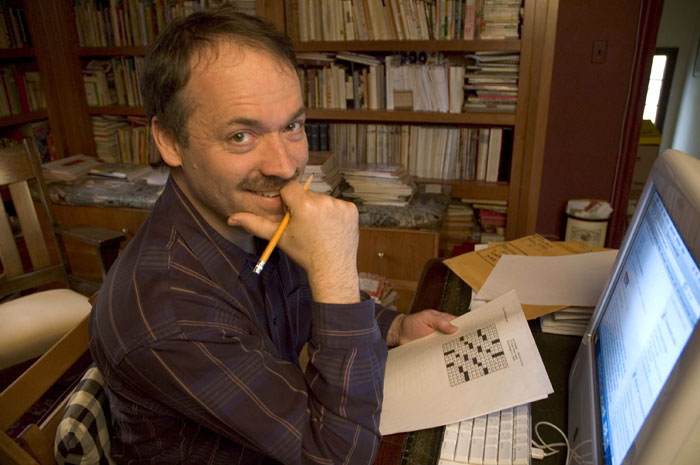 The Marriott in Stamford Connecticut has become the reunion base for a bunch of geeky puzzle freaks brought together by long-time New York Times crossword puzzle editor Will Shortz when he created the Crossword Puzzle Tournament in the 1970s. Director/cinematographer Patrick Creadon weaves in and out amongst the tournament, its creator, five of its strongest competitors and celebrities who enjoy "Wordplay."

"Wordplay" is clearly an offshoot of the incredibly popular "Spellbound," the 2002 documentary on the national spelling bee, but that movies was for kids. "Wordplay" is the better, grownup edition, a delight on many levels. The film was originally intended to be a piece on Shortz and so it begins with him. Shortz describes himself as a man so fascinated by puzzles, he became determined to make his living by them, no matter how meager (a sentiment repeated by Broadway pianist competitor Jon Delfin, who admires anyone who enjoys what the do for a living), and so went to the University of Indiana where one could major in anything. Being a word devotee, he was pleased to present himself as an enigmatologist. Shortz is both an amiable, amusing guy (his favorite part of the week is reading his mail, much of it abusive, and he merrily shares it with us) and a great jumping off point. From Shortz, Creadon segues to puzzle 'constructor' Merl Reagle, who lets us watch him build up the titular puzzle, explaining the rules and pitfalls of construction as he goes. He also shows how a puzzle's title is a thematic clue in itself, here pointing to words which feature 'word' and 'play' within them. Avid crossworder Bill Clinton admires one of the more intricate puzzles, devised to allow either "Clinton" OR "Bob Dole" to correctly fit crosswise with the word 'elected' and fit the downwards words and their clues as well. As in "Spellbound" and its ilk, we meet five of the contestants who will feature in the film's ending tournament suspense. Al Sanders is project manager for Hewlett Packard and father of three in suburban Colorado who times himself in prep for competition. He's become known for ending up in the top three, but never cracking first or second place. Ellen Ripstein is a self-described nerdy New Yorker who is proud of a title that declared her the best in the world at something. Jon Delfin, another former winner, is living proof of the findings that it is mathematicians and musicians, not English teachers, who make the best crossworders. Trip Payne is a multi-title holder, the guy to beat who has a fondness for the letter 'Q.' Last, but not least, Tyler Hinman is the twenty year old Rensselaer Institute student who can finish off the Sunday New York Times puzzle, largely regarded as the most extreme challenge, in blinding speeds. We meet other contestants as well, many who have been attending the Tournament for each of its twenty-eight years, and who reconnect like some strange but warm extended family. Creadon's construction of his documentary really hits its stride when he goes into his final third and shows the competition. Ingeniously he zooms into the puzzles that are being worked, highlighting sections as glowing blocks besides the clues to fill them. This brings his audience into the game itself, so we are not merely watching the competition, but participating in it, an ingenious device. There's also real drama and gamesmanship on display, with Payne bringing a scoring mistake to the judges' attention that gives his chief competitor, Hinman, the edge. When the final three take to the stage, what comes down is both expected and unexpected, a real heartbreak and a new breakthrough. As theatrical documentary releases have proliferated in the past few years, quality has become less consistent, but "Wordplay" is a delight. Not only is its subject matter more entertaining than most would have imagined, but like a good crossword, it is artfully constructed.

Will Shortz is not a household name, that is, unless you are a fan (addict?) of the New York Time crossword puzzles. For them, he is the man who puts forth challenges everyday with his world-renowned, intelligent mind games. Documaker Patrick Creadon analyzes Shortz and the fans of his chosen craft in Wordplay.” This is the kind of documentary that is a must for anyone who steadfastly spends the time each day or week to complete his or her favorite crossword. Of course, the NY Times puzzle is the most famous and is the focus of “Wordplay” as we learn about the anatomy of a crossword puzzle, how they are designed and who designs them. We also get a glimpse of the celebrities addicted to the work of Shortz and others. Such notables as Bill Clinton, Jon Stewart, the Indigo Girls and filmmaker Ken Burns join everyday Joes in giving their opinions about their love (and, sometimes, hate) relationship with their puzzles. But, “Wordplay” also has appeal to guys like me who, if I try to do a puzzle, gives up within, say, five minutes. I learned quite a bit about the game that, while not making me want to go buy the Sunday New York Times (reportedly the hardest of that paper’s daily puzzle output), it did keep me interested most of the way through. Things do slow down for the film’s last third as it shifts focus to the American Crossword Puzzle Tournament, held annually for the last 30 years in Stamford, Connecticutt. Watching someone doing a crossword puzzle is definitely something best left to the fans. Most documentaries are made with a particular audience or interest in mind and “Wordplay” is just such a doc. Crossword fans, like my wife Laura, will enjoy while only the curious non-fan will take to it.