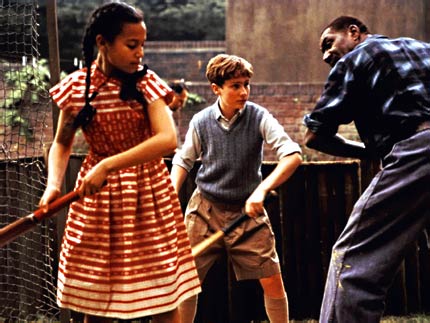 David Wiseman (Sam Smith) is just crazy about cricket. Although hard-working Polish emigre dad Victor (Stanley Townsend, "The Libertine") knows nothing about the sport and offers no encouragement, his mother, Ruth (Emily Woof, "The Full Monty"), knits him a natty sweater and keeps the rest of his whites white. But what Ruth and even David do not know is that David is terrible at the game. As his school coach puts it, David is in a state of "Wondrous Oblivion."

Writer/director Paul Morrison, whose "Solomon and Gaenor" was a surprise Foreign Language nominee in 1999, delivers a film as awkward as its subject, yet despite its amateurish direction, uneven acting and low budget production values, "Wondrous Oblivion" is a difficult film to dislike. This rather cliched film about sports and racism floats higher than it should on the wings of star Delroy Lindo (HBO's "Lackawanna Blues," "Domino"), the charm of child actors Smith and Leonie Elliott, its odd mix of Jewish and Jamaican culture and the strange sport at its center. The Wisemans are the only Jews in their Lewisham neighborhood. When the people in the attached brownstone next door move out, Ruth becomes the clearing house for information about who will move in. When Samuels arrive from Jamaica, their loud music and fetid fertilizer become the talk that masks the real root of disapproval. Even David is cautioned that these people are 'different' and he is not to venture beyond politeness. But when David realizes that the strange structure Dennis Samuels is replacing a beloved British backyard rose garden with is a cricket cage, the young lad cannot help but hover on the sidelines outfitted to go. Accomplished players Dennis and his young daughter Judy (Elliott) are enthusiastically welcoming of the professionally turned out boy but aghast at his cluelessness and inability. Dennis's coaching has such a profound effect on the boy that the Wiseman's give in despite neighborhood complaints about their association, but when David's birthday rolls around, he is proud to receive members of his all white team and shuts out best friend Judy, driving a wedge between the neighboring families. So, what works about "Wondrous Oblivion?" Morrison has achieved tremendous performances from his child actors. Smith exudes an almost breathlessly beatific aura that makes one root for the ungainly kid and Leonie Elliott is his opposite, calm and wise beyond her years. Morrison also creates parallel interracial romances, one between the kids that David is perhaps unaware of and one between Dennis and Ruth that Dennis nips in the bud. Both are encapsulated in dancing scenes that are both wonderfully realized. There is also a beautiful bridging between the families' religions, with the Samuels inviting David to recite in Hebrew in their church (Morrison has him accompanied by a Black choir in a truly lovely scene). Ruth's character arc, from opening up to Dennis, to making her marriage work with new found individualism, is nicely written. However, there are many things that do not work and are, in fact, quite poor. Emily Woof's performance is hugely hindered by an accent of alien origin while Townsend comes across like Jon Lovitz imitating Henry Kissinger. The enclosed back gardens are claustrophobic and feel like stage sets and Morrison often stages his actors oddly. Ruth and Victor hover outside their son's bedroom door set against patterned wallpaper that seems to move in the background while they lean forward into - nothingness - we cannot see the door. A racist attack on the Samuels is amateurishly assembled in the extreme and Morrison's use of cricket cards with the players animated within the frames is all too "Harry Potter." And if you are in the dark about cricket before this film, you will still be at its end. "Wondrous Oblivion" is not accomplished filmmaking but its sweet story, some likable performances and an unusual backdrop make it worthwhile.

David Wiseman (Sam Smith) loves everything about the game of cricket: playing it, collecting pro cricket player cards, talking about it – everything. The only problem is, he’s the worst player at his school. But, this is about to change when a Jamaican laborer, Dennis (Delroy Lindo), with his family, moves in next-door and he builds a cricket pitch in his backyard. Dennis takes the boy under his wing and teaches him to be a good, even a great, player in Wondrous Oblivion.” Set in 1960 London, the Jewish Wiseman family, transplanted from Germany, has been the social pariah of the neighborhood for years. That is, until Dennis and his family move in. Now, the neighbors have a new object for their hateful prejudice and enlist the Wisemans to help get rid of the black interlopers. David’s parents, Ruth (Emily Woof) and Victor (Stanley Townsend), just want to be accepted by their Protestant neighbors and agree to do what they can to force the Jamaicans out. A wrench is thrown into the works, though, when David befriends Dennis and his daughter, Judy (Leonie Elliot), and starts spending all of his spare time in Dennis’s yard learning and playing his beloved game. The neighborhood soon turns hostile and violent. The title, especially the “oblivion” part, is apt for this confused, though well made, little period film. The focus, it seems, at the beginning, is on David, his love for cricket and his ineptness at playing the game. What should have been a rags to riches sports film – with David shown getting better and better at the sport – pushes this aside in favor of social commentary on prejudice and racism. Sure, David is shown, in very short bits, getting better and better at cricket under Dennis’s tutelage. But his rise to prowess on his school’s team is given little more than cursory attention. As David obviously improves his game, none of his teammates appear to notice his metamorphosis. His rise in status as a real player, instead of being shown on the field to any great degree, is revealed, mosty, by his name appearing on the player lists posted on the school bulletin board. This is definitely not ”Bend It Like Beckham.” The real meat of “Wondrous Oblivion” is the Wiseman’s home life as it is changed by the arrival of Dennis and his family. The hateful neighbors, represented shallowly by a couple of busybody women, are never given real face as they resort to increasingly nasty means to drive the black family out, including arson. It feels more like the American South during the civil rights days than it does London. You half expect a burning cross to come into the picture. There is also a manufactured-feel to the attraction by David’s mousy mother, Ruth, for Dennis as she is drawn to the man who acts more like a father to her son than her own husband. Stanley Townsend’s Victor does not fare too well, either, as his workaholic ways keep him from taking care of the emotional well being of his wife and son. The best thing about “Wondrous Oblivion” is the anchored performance given by Delroy Lindo. The man, as Dennis, exudes goodness and understanding and you just want the poopy-headed neighbors to leave him, and his family, alone. Sam Smith seems far too competent to be the loser that we are introduced to in the beginning so his improvements as a player don’t really ring true. Emily Woof, as Ruth, is, I think, supposed to be German but her accent is unidentifiable. Leonie Elliot, as Judy, should be more significant as a character but is really just an object. The rest of the cast is given stick figure caricatures only. Wondrous Oblivion” is a good-looking period piece that doesn’t keep its focus on any one thing. As such, it jumps back and forth between David’s sport, Dennis’s Yoda-like teaching, Ruth’s hots for the kind neighbor, social prejudice and racism and an out-of-context thug who is the hit man for the busybody women. He is the only man in the ‘hood that appears to take a stance against the black family. The rest of the men are simply neutral observers of the bigoted events that take place around them. I didn’t know which of “Wondrous Oblivion’s” story threads I should care about so I cared about none.