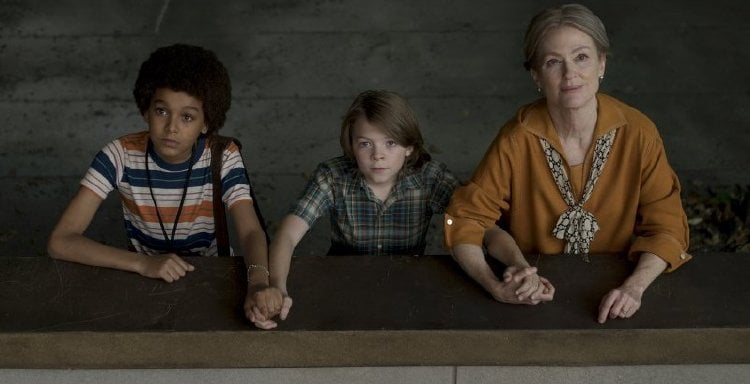 In 1927, Rose (Millicent Simmonds), a young deaf girl, runs away from home to Manhattan where she hopes to connect with the silent film star she idolizes, Lillian Mayhew (Julianne Moore). Fifty years later, another deaf child, Ben (Oakes Fegley, 2016's "Pete's Dragon"), runs all the way from Minnesota to the same place hunting for family after a tragedy. When their paths dovetail, they are "Wonderstruck."

Todd Haynes's ("Carol") latest, adapted from his own book by Brian Selznick ("Hugo"), is, unfortunately, overly simplistic, an obvious and sentimental tale whose greatest assets are Carter Burwell's ("Goodbye Christopher Robin," "Carol") score, used in the silent black and white 1927 setting until the stories merge, and Mark Friedberg's ("The Life Aquatic with Steve Zissou") production design celebrating museum and book curation. There is far more childlike wonder to be found in Sean Baker's "The Florida Project" than in "Wonderstruck." The film begins with a dream of being chased by wolves, Ben's dream as it turns out. His mother (Michelle Williams) gifts him a leather wallet embossed with wolves for his birthday, but refuses yet again to tell him about his father, at least until 'it's the right time.' After a horrible accident takes her away, Ben finds a bookmark in an old book, 'Wonderstruck,' advertising Kinkaid Books in New York City. On the back, there's a note to his mom from 'Danny.' He attempts to call the number, but lightning strikes, damaging his hearing. The film crosscuts between the two time periods separated by fifty years, equating Rose's experiences with Ben's. She arrives in a rising, clean New York City to be almost trampled by a horse and carriage. She lip reads a helpful passerby's directions to the theater where Mayhew is appearing. Ben walks right into 'The Deuce' in all its colorful seediness only to have his cash ripped off. Kinkaid Books has obviously been shut down for some time and Ben cannot understand the young boy (Jaden Michael) trying to tell him it's now around the corner. So he follows him, entering the magical world of The American Museum of Natural History. Rose will go there too, in search of her brother Walter (Cory Michael Smith, "Carol"). They both stop in front of the Minnesota wolf diorama. Neither of these deaf children know sign language, Rose having run away just as her new teacher arrived, Ben's affliction too recent. Unfortunately for us, that means great amounts of the film's running time is given over to people writing down notes, then these two reading them, hardly cinematic bliss. The film switches periods on overt, almost corny notes (a quote about the stars to a period movie star magazine, Moore appearing in the silent "Daughter of the Storm" to a real storm in 1977, etc.). Young Simmonds (one of seven deaf actors to appear in the 1927 segment) is a marvelous find, a naturally expressive actress (note her look of dejected panic when she sees her local cinema touting the arrival of 'talkies'). Fegley's deafness is less believable, perhaps because he's been directed to shout 'I can't understand you!' to everyone who begins speaking to him when even we can lip read. Moore is most interesting in the imagined silent films Mayhew stars in, beautifully shot by Haynes's cinematographer Ed Lachman. Tom Noonan ("The House of the Devil") pops up in a welcome appearance as a 1927 character fifty years later. The film culminates with New York's 1977 blackout at the Queens Museum's panorama of the City of New York. It's a lovely moment, but its revelations will only surprise the character who learns them. "Wonderstruck" features exemplary craft in service to a banal story. Grade: