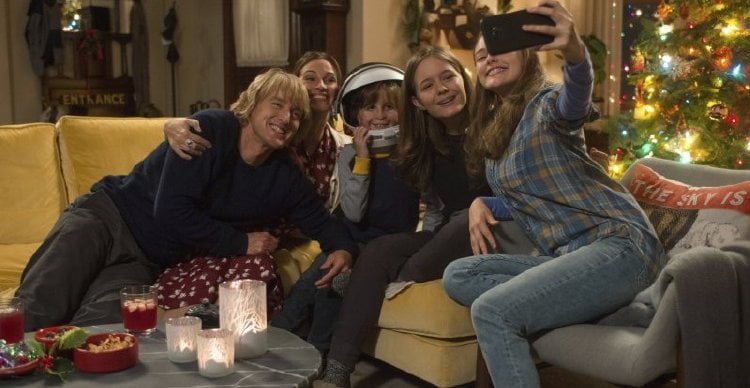 Auggie Pullman (Jacob Tremblay) is just an ordinary kid with a not so ordinary face. Born with a disfiguring birth defect and underwent 27 operations, the boy has been home schooled by his mom, Isabel (Julia Roberts), since a toddler. She decides, when she thinks Auggie is ready and against her husband’s (Owen Wilson) fears, to send her son to a real school with other kids. Life will change for her little “Wonder.”

Auggie Pullman (Jacob Tremblay, "The Room") has facial deformities which startle strangers, the young boy favoring a toy NASA helmet as a buffer between himself and the public. But when his mom Isabel (Julia Roberts) decides the fifth grade would be the perfect time to introduce him to 'normal' school, Auggie faces a year of torment, learning, friendship and "Wonder." Cowriter (with Steve Conrad and Jack Thorne)/director Stephen Chbosky's ("The Perks of Being a Wallflower") film is best described as nice. This is the type of film where everyone except the school bully has good intentions, where bad behavior becomes understandable with widening perspective, where no one need worry about money. The most subversive idea in "Wonder" is that a disabled family member draws attention away from everyone else, even the family dog. The Pullman family live in a sprawling Manhattan brownstone where Auggie's 27 surgeries have been memorialized in a framed display of his hospital wristbands. Nate Pullman (Owen Wilson) has misgivings about Auggie entering the real world, but Isabel reasons that the beginning of middle school is new for everyone. Principal Mr. Tushman (Mandy Patinkin) has arranged for three students to give Auggie a tour before school begins and it is telling, Charlotte (Elle McKinnon) obliviously chattering away about her acting career, Julian (Bryce Gheisar, "A Dog's Purpose") asking blunt questions while Jack Will (Noah Jupe, "Suburbicon") squirms. On the first day of class, Jack sits next to Auggie after he's rebuffed by Julian. Mr. Browne (Daveed Diggs, TV's 'Blackish') asks everyone to tell their classmates two things about themselves. Auggie volunteers that he has an older sister, Via (Izabela Vidovic, "Homefront"), and a dog named Daisy. But "Wonder," based on the novel by R.J. Palacio, doesn't keep its focus on Auggie, giving various family members their own 'chapters.' Via is shocked when her best friend Miranda (Danielle Rose Russell, "Aloha"), who neglected to call her when returning from summer camp two weeks prior, shows up in school with pink hair and a nose ring and barely acknowledges her. Miranda, practically a member of the Pullman family, will later get her own where we'll learn Auggie's NASA helmet was a Christmas gift from her. The two uneasily find themselves in the drama club, Via drawn in by the romantic interests of Justin (Nadji Jeter, "Grown Ups 2"). Jack, who was pushed into befriending Auggie by his mom, discovers he really likes the kid whose knowledge of science impresses all. Julian tries to poach Jack as a partner for the science fair, but he stands firm with Auggie. But when Halloween arrives, allowing Auggie to pass unnoticed in his ghost face costume, he'll overhear Jack pandering to his old crowd with unkind words. Auggie distances himself from Jack, even after Jack is suspended for punching Julian (Mr. Tushman recognizes the event for what it is, Jack's defense of Auggie). Summer (Millie Davis) takes Jack's place in the cafeteria when she sees Auggie sitting alone. Of course everything is neatly tied up by film's end, a high school production of 'Our Town' and a trip to a nature preserve presenting cathartic moments. Chbosky's round robin chaptering provides differing viewpoints but isn't evenly handled, a character's name presented but their story often veering off into the general whole. Owen Wilson's character receives the least attention, the family breadwinner's value expressed the loudest in a scene celebrating Isabel. That said, Julia Roberts is the standout in the film, her reaction to Auggie leaving school with a friend the film's high point. Tremblay paints Auggie with just the right amount of self-centeredness to keep his character human, considering it when pointed out by Via. It must be said, though, that his deformities are not all that shocking, his face as made up quickly accepted (1985's "Mask" took a similar deformity to more of an extreme while also surrounding its lead character with one of the nicest biker gangs in cinema history). Sonia Braga appears in a lovely flashback as Isabel's late mother and Via's biggest champion. As Miles, Kyle Breitkopf of TV's 'The Whispers,' screams 'professional child actor,' standing out for all the wrong reasons. "Wonder" is a well-intentioned family film with a good message (the novel's author was inspired by her own reaction to a child with facial deformities in an ice cream parlor, a scene recreated here), but the fairy tale landscape that is Auggie's world gives him a considerable leg up before his story's even started. Grade:

Not to diss director and co-writer Stephen Chbosky (with Steve Conrad and Jack Thorne) on the adaption of the New York Times bestseller by R, J. Palacio about a boy who looks different from all the other kids, but all I could think of while watching “Wonder” was that it feels like Peter Bogdonovich’s “Mask (1985),” but without the adorable biker gang. That said, “Wonder” is a very sweet story about difference, acceptance and friendship as told through a series of chapters looking at Auggie, his sister Via (Izabela Vidovic), his new friend Jack Will (Noah Jupe) and her once best friend, Miranda (Danielle Rose Russell) and their individual POVs of Auggie’s first day at school and life in the Pullman family. Auggie must face (no pun intended) all the obstacles that are put before someone who is simply different looking from everyone else. The youngster’s trials and tribulations during his first days at school – stared at, bullied and alone – slowly change as the other kids, some at least, understand that intelligence and humor are more important than how someone looks. It is a sweet, inspirational tale that nicely ties up all loose ends by the time of the feel-good finale.