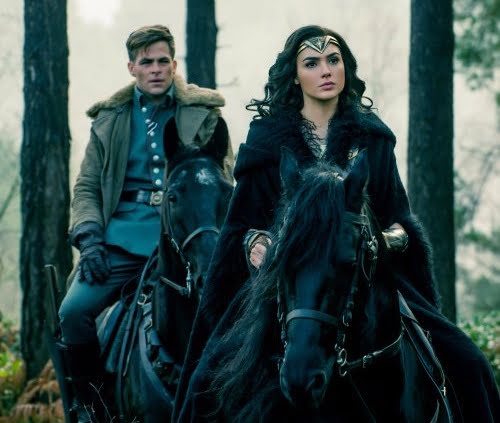 On the sheltered island of Themyscira, Diana (Gal Gadot) is raised as a warrior and Princess of the Amazons. Her world is expanded when American pilot Steve Trevor (Chris Pine) crashes on its shores, telling the women about the global war currently raging in 1918. Convinced this is the work of the God of War, Ares, the corruptor of men the Amazons must defeat, Diana defies her mother, Queen Hippolyta (Connie Nielsen), leaving with Trevor to confront one of the war's villainous architects, General Ludendorff (Danny Huston), in her new incarnation as "Wonder Woman."

After years of waiting and a thunderous wave of hype the most famous female super hero finally gets her own movie. Was it worth the wait? Well, as satisfying as it is to see a woman taking control, powered by a belief in love's ability to overcome, director Patty Jenkins ("Monster") has served up an old fashioned super hero movie. There's nothing wrong with that, of course, but I don't think my strongest impression was supposed to be 'Robin Wright really kicks ass.'

Wright is Diana's aunt, General Antiope, the one who trains her against her mother's wishes, and she is fierce. When German troops follow Trevor's crash landing onto the shores of Themyscira, Wright leads the Amazons, flying through the air, shooting arrows, her toned muscles responding instantaneously to every threat.

After defeating the German troops, the Amazons debate what to do with Trevor, who happens to be outfitted in the same military uniform of those he was escaping. Diana, who saved him from his sinking plane, insists he fought by her side. The Lasso of Hestia comes out and Trevor spills. He's a spy, on the side of the 'good guys.'

Screenwriter Allan Heinberg (TV's 'The Catch') derives a lot of humor from Diana's pairing with the first man she's ever seen, her naivety mixed with ancient knowledge (she informs Steve she's read all twelve volumes of a sex manual and concluded men are 'essential for procreation' but unnecessary for pleasure). When the woman who was formed from clay and given life by Zeus asks Steve if he's a typical specimen of his gender, Trevor uncomfortably deems himself 'above average.'

There's more comedy afoot when, arriving in London, Steve tasks his secretary, Etta Candy (Lucy Davis, "Shaun of the Dead"), with helping Diana to blend in, Diana observing that Etta's account of what a secretary is sounds more like slavery. She creates a scandal when she follows Steve into his boss Sir Patrick's (David Thewlis) meeting on an upcoming armistice, but earns his admiration. Despite officially ordering Trevor not to return to the front, despite his having just returned with Ludendorff's chemist Dr. Maru's (Elena Anaya, "The Skin I Live In") notebook which reveals the horrific weapon they're about to unleash, he funds the operation, to be run from his office by Etta.

Gal Gadot is delightful in the title role, pure idealism and athleticism, her accent giving the character a sexy otherness. Pine is an old fashioned hero, frustrated in his attempts to explain humankind's complicated flaws. Bremner, Taghmaoui and Brave Rock are a wonderfully contrasted band of sidekicks. But Huston, with his Maru supplied energy poppers that make him glow from within, resembles something from "Raiders of the Lost Ark," a cardboard villain, while Anaya is defined by her quarter-face mask. A final act reveal is rather laughable, given the actor tasked to suit up as the God of War in a final showdown that brings on the usual CGI murk.