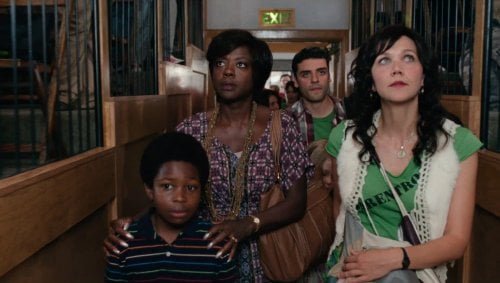 Jamie Fitzpatrick (Maggie Gyllenhaal, "Hysteria") believes her dyslexic daughter is getting an inferior education at Pittsburgh's Adams Elementary. When she hooks up with second grade teacher Nona Alberts (Viola Davis, "The Help"), herself the mother of a special needs student, they become a formidable team who take on the system and "Won't Back Down."

2012 has been actress Gyllenhaal's year to get on her soapbox. First women's rights in "Hysteria," now children's education in this film from cowriter (with Brin Hill)/director Daniel Barnz ("Beastly") that plays like the feature fiction parallel to Davis Guggenheim's controversial 2010 doc "Waiting for Superman" with a sop to the unions thrown in. Gyllenhaal was far too modern for "Hysteria's" period setting. Here she's just exhausting, a perpetually upbeat go-getter who can create a cause, draw crowds to it and beat the system all while juggling cookies and balancing plates on her nose. Thankfully, the film is grounded by Viola Davis's sad, worn turn as a mother bearing a guilt we do not guess trying to remain dedicated to her profession in a school where few care anymore. She lives in a nice but not ostentatious house with the white collar husband, Charles (Lance Reddick, HBO's 'The Wire,' TV's 'Fringe'), who is about to leave her for reasons which appear to point towards her obsession with son Cody (Dante Brown). She's respectable and conservative, so when the tattooed, effusive mom in rock chick clothes from a grubbier part of town (her apartment can only be described as chaotic) approaches, she's hesitant. After all, Jamie's uncovering of an arcane law which allows parents and teachers to make a proposal to the school board to take over a school requires jettisoning the teachers' union and even though Nona's circle are disgusted by its failings (Deborah (Nancy Bach), a coworker, plays with her phone during class but is tenured), they embrace the security it affords. This issue is served up in the form of Michael (Oscar Isaac, "Drive," "10 Years"), a fun teacher whose parents were union organizers and who becomes Jamie's romantic possibility. Conflict, check. There is also Evelyn Riske (a surprisingly aged Holly Hunter), a union executive with a conscience who provides double-barreled conflict when she offers Jamie a private scholarship for Malia (Emily Alyn Lind, "J. Edgar," TV's 'Revenge') and then informs Nona. Higher up on the food chain is Olivia Lopez (a very good Marianne Jean-Baptise), the about-to-retire chair of the school board willing to throw out a last minute life line to battle her own bureaucracy. The large ensemble also includes Rosie Perez as Nona's tightest colleague, Bill Nunn as a corrupt principal, Ving Rhames as principal of an inspirational charter school and Ned Eisenberg as the cutthroat teacher's union head. "Won't Back Down" is one of those good-for-you movies about individuals making extreme sacrifices in the face of opposition from multiple fronts for the better good. It does a fairly good job laying out the complexities which plague our educational system (nice speech from Davis drawing a practical line from school statistics to prison construction) even though it places them in an almost entirely predictable story outline. Nice touch with a bookend device that places Malia front and center struggle first with the word 'story,' then with the word 'hope.'