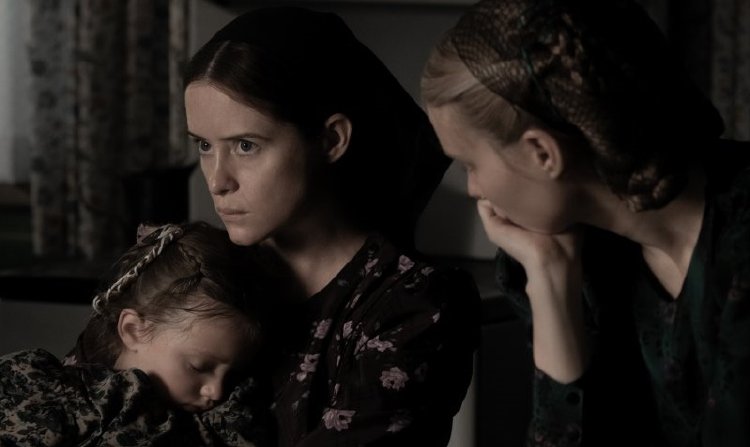 Ona (Rooney Mara) awakens in her Amish-like community The Colony to discover blood streaked between her legs, her mother, Agata (Judith Ivey), rushing in to comfort her.  Finding her 4 year-old daughter Miep (Emily Mitchell) has been violated, Salome (Claire Foy) is held back from killing a man with a pitchfork.  Gathering in a hayloft with one male participant, August (Ben Whishaw), acting as their scribe, arguments are heard as to whether the female members of this religious settlement should do nothing, stay and fight, or leave in “Women Talking.”

It has been ten years since writer/director Sarah Polley’s last film (“Stories We Tell”) and her latest, adapted from the Miriam Toews novel with the author, while admirable in many respects, is something of a disappointment.  Hailed by some as a masterpiece of the #MeToo era, the film sets up its main characters as specific types – Ona the beatific one, Salome the enraged one, Mariche (Jessie Buckley) the caustic one, Mejal (Michelle McLeod) the traumatized one – and uses them to feed those emotional viewpoints into a debate which eventually becomes repetitive.  With the exception of Mara, none of the actresses is given leeway to create a character beyond her victimhood.  Furthermore, by creating more distance from the actual 2009 events at a Bolivian Mennonite colony (where eight men were convicted of raping women and even very young girls after their households were anesthetized) than the novel did, the film creates the impression that every male character save one is a rapist or budding one.  The one who isn’t, August, is so gentle and sensitive he apologizes when verbal abuse is directed his way, his very maleness his original sin.  I am no fan of patriarchal religious societies, but this depiction is too extreme (many of the men involved in the real event supported the women and had also been drugged along with them to prevent them from protecting them).

With the exception of Scarface Janz (Frances McDormand), a stern Colony hardliner who also holds daughters Anna (Kira Guloien) and the blind Helena (Shayla Brown) back, three generations of women gather, pre-teen Autje (Kate Hallett), always found with her cohort Neitje (Liv McNeil), acting as the film’s narrator.  She will confide that August, the son of a woman shunned for her questioning of the status quo, has always loved Ona.  He has become the colony’s schoolteacher, but only the boys are taught here, the women learning how to vote by marking their chosen column with an ‘X.’  After the first option to do nothing is quickly dismissed, Ona asks the women what they are fighting for.  Equality becomes the consensus, Agata noting they’ve never asked the men for anything, but that really only speaks to the ‘stay and fight’ option where forgiveness would play a significant part.  Salome believes forgiveness cannot be forced and her maternal instincts to protect her children could make her a murderer, something which alarms Agata.  The only real argument against leaving is how it would reflect on the women’s path to heaven.

Polley cuts away from the hayloft for more colorful outdoor interludes like boys and girls playing in the fields, watched over by the young woman (August Winter) who now insists on wearing men’s clothes and being called Melvin (we’ll later learn she was raped by her own brother).  The other older woman of the group, Greta (“I Hear the Mermaids Singing’s” Sheila McCarthy), makes analogies referencing her beloved horses Ruth and Cheryl which lead to flashbacks.  The most character rich scene occurs when Ona wanders off with August and we learn of her curiosity about the world and all the interests they share, but despite his sincere wish to marry her and adopt her unborn child, she insists that marriage will turn her into a different person, someone other than the one he loves (August, the only decent man portrayed here, is continually rejected in one form or another, his fate to mold the 13 and 14 year-old boys who might otherwise ‘cause tremendous harm’).

The film gets its biggest shakeup by a 2010 census taker who arrives in a pickup truck blaring The Monkees’ ‘Daydream Believer,’ a bizarre intrusion referencing multiple decades from the modern world.  Urgency is introduced with news that one or more of the men taken away by authorities may be returning.

The cast is the best thing about the film, Mara radiant, Foy fierce, Ivey grounding with calm wisdom, but it is frustrating that we learn so little about so many of them.  Luc Montpellier’s (“Away from Her”) desaturated cinematography in the hayloft seems an odd choice for a colony known for working in hand with nature, outdoor scenes more colorful reflecting the hope which should be reflected by that indoor talk.  Hildur Guðnadóttir’s guitar and harp score, however, is perfectly in keeping with the surroundings and material.

For all the horrors the film suggests and the spiritual analysis given their chosen reaction to them, “Women Talking” is narratively inert, a discussion leading to a forgone conclusion.