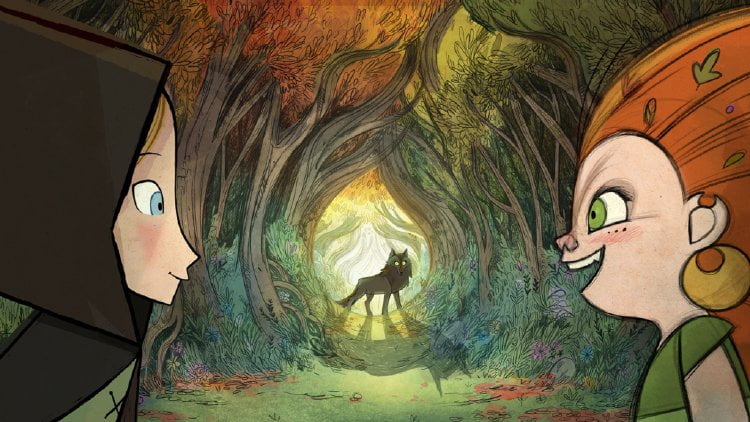 In 1650, 11 year-old aspiring huntress Robyn Goodfellowe (voice of Honor Kneafsey) chafes against the restrictive rules set by her father Bill (voice of Sean Bean) who has brought them from England to rid the forest outside their new Irish city’s walls of wolves.  As she rebelliously explores the forest with her pet falcon Merlyn, Robyn inadvertently shoots the bird while trying to help a shepherd under attack.  Horrified, she watches a wild, red-haired girl take Merlyn, disappearing into a hidden clearing with the wolf pack.  Bill doesn’t believe her, but Robyn’s convinced she has seen “Wolfwalkers.”

Thom Moore, codirecting with his "The Secret of Kells" art director Ross Stewart and cowriting with his "Song of the Sea" collaborator Will Collins (story by Jericca Cleland), brings another of his uniquely animated Celtic tales to the screen with what may be his most engaging story yet.  Moore’s work is immediately identifiable by his use of shapes as building blocks combined with naturalistic color palettes and this one is a beauty, its 17th century architecture comprised of geometric shapes, its forest magically rendered in swirling autumnal shades, its undulating wolf pack moving as one.

Ordered to stay inside, Robyn is clearly not cut out for housework (the jeering Irish boys soon learn not to mess with her) and soon slips out, sneaking past the guarded gates to try and save her falcon.  And sure enough, she meets that feral redhead.  Mebh Óg MacTíre (voice of Eva Whittaker) is indeed a wolfwalker, a shapeshifter, and when she attempts to free the uncomprehending Robyn held aloft in a net trap, Robyn receives a bite that will make her one too.  Mebh is thrilled to welcome another like her, as her mother has been in suspended animation since Bill’s boss, the Lord Protector (voice of Simon McBurney), captured her in her wolf form and is keeping her hidden away in his throne room.

“Wolfwalkers” champions girl power over tyranny while it revels in the glories of the natural world.  When the Lord Protector orders Robyn into the scullery, it is nothing but tedium and oppression, at least until she discovers his secret.  The filmmakers are a little wobbly in their wolfwalker concept – explained as living as girl by day, wolf by night we nonetheless frequently see daytime wolfwalkers – but this is a small nit, especially when the film’s climax delivers us exactly what we’d hoped for as Bill defies his overlord.

Professional hunter Bill Goodfellowe (Sean Bean) and his apprentice-daughter Robyn (Honor Kneafsey) move to Ireland to perform a deadly task: wipe out the last remaining wolf pack in the land by order of the Lord Protector (Simon McBurney). Things get complicated, though, when Robyn meets, in the nearby woods, a free-spirited, wild-haired girl named Mebh (Eva Whittaker) who belongs to a tribe of “Wolfwalkers.”

Again, a dominating white man forcing his will upon both the population and the land for the mere sake of destruction – which only he sees fit. That may not be the overall premise of “Wolfwalkers,” which is really a story about friendship and saving the environment, but the greedy white man is what is at the bottom of the bad things of the story (and most of the bad things that happen on this earth today).

Bill reluctantly takes on the onerous slaughter out of necessity – he has a child the widower must raise alone – and sets off into the woods. Against the rules of the Lord Protector, Robyn follows him and soon gets separated from her dad and alone. Until, that is, she meets the abovementioned free spirit, Mebh.

This chance meeting introduces Robyn to a world, not fraught with dangers, but one that is fighting for survival from the encroachers – men and the destruction they bring. Robyn and Mebh’s story, their friendship and their mutual love for nature harkens a feeling of hope for our world.

This is from the makers of the 2009 Oscar-nominated animated feature, “Secret of Kells.” There are similarities with “Wolfwalkers” in that both deal with the supernatural and the importance of nature and the land. The new film, though, is timely for our world here in America, where, as I said, “a dominating white man forcing his will upon both the population and the land for the mere sake of destruction – which only he sees fit.” I hope that is over for us.