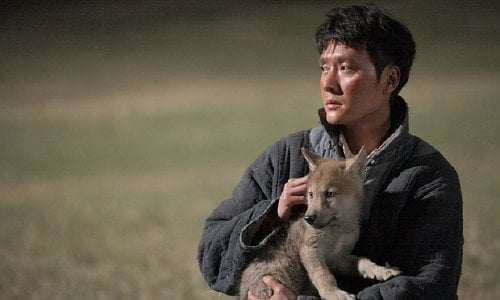 In 1967, at the height of the Cultural Revolution in China, a young student, Chen Zhen (Shaofeng Feng), is sent to Inner Mongolia to live with, and bring the Communist doctrine to, the nomadic herdsmen. The young man finds himself in the middle of the battle between traditional life of the nomads and the onslaught of civilization, and marauding wolves, in Wolf Totem.”

In 1967, students Chen Zhen (Shaofeng Feng) and his friend Yang Ke (Shawn Dou, "The Flowers of War") volunteered to go from Beijing to Inner Mongolia during the Chinese Cultural Revolution. Chen would find himself caught between Bilig (Basen Zhabu, "Red Cliff"), the old grasslander who understands the balance of nature, and Bao Shunghi (Yin Zhusheng, "Drug War"), the group's Communist leader tasked with obeying orders at the "Wolf Totem." Cowriter (with "Happy Feet's" John Collee, "Two Brothers's" Alain Godard and Lu Wei)/director Jean-Jacques Annaud has made films like "Enemy at the Gates," but he is perhaps best known for his animal-centric films "The Bear" and "Two Brothers." In adapting Jiang Rong's autobiographical novel, Annaud straddles the worlds of human politics and the beasts they coexist with and exploit in his most stunning film to date. Presented in IMAX 3D, there are scenes in this film that are literally breathtaking when they are not capturing or breaking the heart. The story itself feels like it has been scaled back to its 121 minute running time, some characters given short shrift, some events presented choppily, but the overall effect of Annaud's film make these minor bumps in the road. The bus of Beijing Communists traveling through the open plains is greeted by migrational herders on horseback, smiling at the new arrivals, unaware of what their arrival will mean to Tenggar, the spirit who brings life and death. Chen immediately takes to the lifestyle, reading at night to Bilig and Bilig's beautiful daughter-in-law Gasma (Ankhnyam Rachaa). Chen is mesmerized by the Mongolian wolves whom the grasslanders treat with respect, sharing the wolves' gazelle kills sparingly so that they will not attack their sheep. When Bao demands that the wolves' cubs be killed, Bilig objects, stating that this will cause the animals to seek vengeance, but the order must be carried out. In his naivety, Chen rescues a cub, calling it Little Wolf, hiding it from both Bao and their sheep herding hosts. When Little Wolf is discovered, Bilig is furious with Chen, believing he is dishonoring the wolf by denying its natural heritage, but Bao approves his 'experiment.' The situation worsens when other relocated outsiders steal the remainder of the wolves' frozen gazelle store. Bilig's warning is proved tragically when a disorienting snowstorm comes in and the Chinese Army's horses, entrusted to his son Batu (Baoyingexige), are attacked. This nighttime scene is extraordinary, glimpses of action scene by the casting of flashlight beams, as wolves gain on horses's haunches amidst swirling snow. Batu loses his life trying to protect them, widowing Gasma and leaving their son without a father. The aftermath is both stunning and horrific, a true-to-life twist on Guy Maddin's frozen horses of "My Winnipeg." "Wolf Totem" presents one glorious scene after another (the totem of the title is a whole skinned wolf, fluttering in the air like a lupine wind sock on the run). Shot in 3D and using drone technology, Annaud navigates both grand landscapes and the intimacy of yurts and wolf cub caves. While special effects were used to remove riders during the horses and wolves segment, no CGI was used to recreate the animals, wolf trainer Andrew Simpson raising the animals used in the film, a total of 50 trainers and handlers needed for the sheep, horses and dogs. While many animals are 'killed' in the movie, Annaud spares sensitive eyes, at least until the last act's final hunt. Composer James Horner, who died in a plane crash earlier this year, provided the type of orchestral score which can be overbearing, but suits this film's majesty. Columbia Pictures/Sony is inexplicably releasing "Wolf Totem" into only 100 theaters. In Boston, only AMC 'Fauxmax' screens will get the film. This one will probably not be in theaters long, but really deserves to be seen on the big screen. It has much to say about environmentalism and Annaud has honored the book with his best film to date. ("Wolf Totem" was deemed ineligible as China's submission for the Foreign Language Oscar for 2015.) Grade: