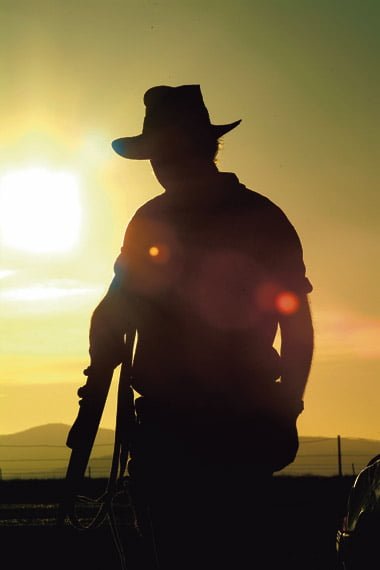 It's the end of a vacation on the shores of Western Australia. Ben Mitchell (Nathan Phillips) has met two lovely English girls, Liz (Cassandra Magrath, "Hotel de Love") and Kristy (Kestie Morassi, "Darkness Falls"), interested in touring the Outback with him on the long drive back east. But one stop proves a horrible fate for all three when they meet a stranger at "Wolf Creek." Writer/director Greg McLean's feature debut showcases a strong talent for filmmaking, if not originality. While "Wolf Creek" is loosely based on Australia's "Backpacker Murders," its debt to the hugely influential "Texas Chainsaw Massacre" is obvious. Still, this is a gritty flick that must be giving Australia's Outback tourism industry a bad case of heartburn. To his credit, McLean takes the time to let us get to know his characters. Ben's a charmer impatient to get on the road with his $1500 used car and wrestling with his attraction to Liz (he's got a girlfriend back home). Kristy's happy to gently facilitate matchmaking. The trio are easy traveling companions, enjoying laughs on their limited budgets. The first foreshadowings of a dreadful fate are twofold. Ben delights in regaling the girls with stories about cars losing power in the middle of nowhere when UFOs are sighted. When they stop for gas at Emu Creek, the locals make creepy sexual threats toward the girls and Ben chooses flight as defense. Things look up again when they arrive at their most anticipated destination, Wolf Creek, a desolate place where a meteor once hit the earth and left an awe-inspiring crater. When they get ready to leave, though, their car is dead (as are their watches). A stranger appears out of nowhere. Mick Taylor (John Jarratt, "Picnic at Hanging Rock," "The Chant of Jimmie Blacksmith") is their very own Crocodile Dundee, an Outback hunter who diagnoses their trouble and offers to tow them back to his camp - in the opposite direction from the nearest town. And so, like "Texas Chainsaw," we have a group of young people traveling to a destination that will prove evil. Their vehicle is shown low in the frame of a vast horizon which shimmers with heat. There's the creepy stop at a gas station where they unknowingly cross paths with their destiny and a colorful local who rejects the modern way of dispatching animals for the good old, more savage days. There's even the graveyard of cars and belongings of former victims and a solar eclipse. McLean does achieve a very original moment of horror with what will be the film's most remembered scene, the 'head on a stick,' a bit of Vietnam era torture that would make a mere noggin on a pike seem like a relief. McLean's direction is solid, but his plotting often doesn't hold water. Too many times he falls back on the groan-inducing cliches of having victims overwhelm their tormentor then fail to finish the job, or warping time and space to his bogieman's advantage. These problems are particularly troublesome as they are so unnecessary and McLean really does know how to instill despair with a cyclical offering of hope snatched away. He also gets better than average performances from his actors for this genre. Cassandra Magrath stands out among the victims as a gutsy heroine. Jarratt will long be remembered as one of cinema's most terrifying monsters, a humorous character who gradually leaks his disturbing agenda. The film short shrifts Phillips's character by shifting focus away from him for long periods, then featuring him in an intriguing yet overly abrupt finale. The HDTV shot film makes the heat and dust palpable and special effects are limited but effective ('She was good for months... until she lost her head'). Composer François Tétaz goes for something aurally different by using classical strings, but while it doesn't distract, it doesn't really work either. "Wolf Creek" is not ground-breaking horror, by any means, but it heralds the arrival of a talented new filmmaker who knows how to make the most of location. Good Samaritans may never get to ply their trade again.