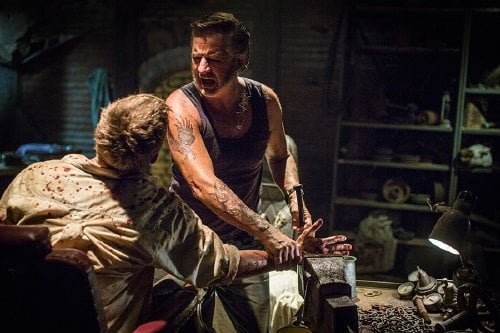 'The first rule of the Outback - you never, ever stop.' The last time we were at Wolf Creek National Park meteor crater in the remote wilds of central Australia, things ended badly for thee young backpackers. Now, nine years later, another couple, Rutger (Philippe Klaus) and Katarina (Shannon Ashlyn), make the long journey from Germany to see the awesome beauty of the Aussie outback. And, they will meet the same fate as their predecessors, again in the guise of the murderous Mick Taylor (John Jarratt), in “Wolf Creek 2.”

The forbidding terrain of Australia's Outback boasts some natural wonders for those willing to make arduous treks in shimmering heat, but all tourists should know that Mick Taylor (John Jarratt, "Wolf Creek") wonders why anyone would come to his remote home to 'defecate' in his back yard. Mick's not to fond of anyone who blocks his sights when he's hunting in "Wolf Creek 2." Cowriter (with prequel novelist Aaron Sterns)/director Greg Mclean made a big splash in 2005 with his Aussie horror flick "Wolf Creek," a nasty but well made piece of work he claimed was based on Australia's back pack murders (there are two separate cases, serial killer Ivan Milat's spree the more notorious). Almost a decade later he's made a sequel which is a little less sadistic than the first while being no less horrifying. If the first was indebted to "The Texas Chainsaw Massacre," his latest, even better film riffs off Stephen Spielberg's "Duel." Mclean's mixed more dark humor into his latest, an opening prologue featuring two bored speed trap cops (Shane Connor of Australian TV's 'Neighbours' and Ben Gerrard) messing with the wrong guy. The scene's so well done, boasting in-camera gore effects and stunts, it could work as a standalone short. It also establishes its anti-hero and John Jarratt is diabolically clever, his Mick approaching strangers as a gregarious local until that little tell - of wariness, mistrust or, in the case of those cops, sheer injustice - makes his eyes go cold. That's not to say Mick's about to easily let anyone escape his clutches. Jarratt's outward Outback schtick is designed to entrap, but even without the soft sell approach, the genius of Mclean's creation is that he's part and parcel of the brutal landscape. Once you're removed from civilization and cross his path, there's no stopping him. When we meet German backpackers Katarina Schmidt (Shannon Ashlyn) and Rutger Enqvist (Phillipe Klaus), we know their fate and Mclean makes it worse by allowing us to get to know them, a young couple in love, enjoying nature and each other's company. Mick's almost nonchalant after dispatching one, allowing the other to get away, but he's holding all the cards and we know it. Mclean throws a new twist into his sequel with double fold rescues and it will be these good Samaritans who pay the heaviest price. 'Pommie' Paul Hammersmith (Ryan Corr, "Where the Wild Things Are") is stopped by the hysterical Katarina, but his attempt to help is cut short and soon he's facing a madman in a roaring semi, herds of kangaroo becoming obstacles for him and roadkill sport for his pursuer. After surviving being rammed over a cliff (another great bit of stunt work), Paul spies a house and after being dragged into it by Jack (Gerard Kennedy, "Newsfront") and informed by Jack's wife Lil (Annie Byron, "Muriel's Wedding") that she'd made soup 'special for him,' we expect to see a picture of Mick on the mantle. Mclean flips expectations and Paul comes to in a very bad place, but his wits are intact and he finds Mick's sweet spot with dirty limericks and rousing choruses of 'Tie Me Kangaroo Down, Sport.' Although his sequel isn't as hard to stomach, Mclean can't resist the urge to travel down the torture porn path. At least it's late in the game, the worst of it suggested by remains of those who've come before. The film's beautifully crafted, Mclean and his cinematographer Toby Oliver using disorienting camera angles to add to the unease. Jarratt can be quite funny without falling into the stereotypical tag line trap as evidenced by a tense Australian history quiz with freedom as the prize. The film's ending is quite clever - Mick could never operate in Sydney, but that doesn't mean he can't mess with it.

Director-writer Greg McLean revisits familiar terrain with his sequel to the gore fest called “Wolf Creek (2005).” That film took torture porn to extremes as one of the modern screen’s best human monsters, Mick Taylor, plied his deadly cannibalistic urges on three unwitting victims. It is a given that, in the sequel, monster Mick would return to wreak his mayhem on those who make the mistake of visiting the remote park. John Jarrett is still as chilling and scary as he was in the original, even more so if you saw the first “Wolf Creek.” “Wolf Creek 2” is not your usual sequel. If anything, it can stand on its own and does not require seeing the original to get right into the story. Things start of with a literal bang as two bored highway patrol cops pull Mick over for speeding, which he was not. He grudgingly accepts the ticket and the patrolmen drive away, but it ain’t over for Mick. The violence is immediate and graphic and, as in the first film, relentless. The “Wolf Creek” films aim at a pretty narrow audience – the horror, gore fans – and it hits its target squarely. The reason it works for those fans is the frightening presence of Mick Taylor. John Jarrett envelops the character in a cold-eyed and menacing way that makes for a guilty pleasure – you almost root for the guy. The structure of the film follows the same path as the original so there is nothing really new here. But, a good monster is worth its weigh in movie tickets and Mick makes for one helluva good monster.