Wish You Were Here 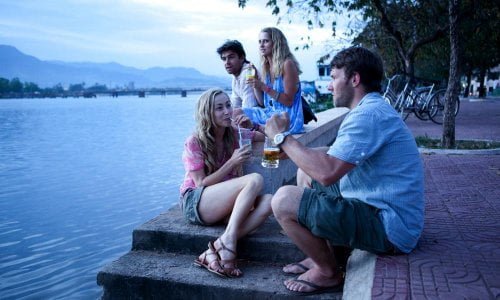 Married couple Dave and Alice Flannery (Joel Edgerton and Felicity Price), with her sister Stephanie (Teresa Palmer) and new boyfriend Jeremy (Anthony Starr), decide they need a getaway, sans kids, and jet to the sunny shores of Cambodia. Their idyllic vacation goes drastically wrong when Jeremy mysteriously disappears. The remaining three all have a version of what happened on that fateful day and we learn their sordid stories of what really happened in “Wish You Were Here.”

Two couples, sisters with their husband and new boyfriend, are having an amazing holiday in Cambodia. We cut to one of them, Alice (cowriter Felicity Price) and Dave Flannery (Joel Edgerton, "The Great Gatsby") returning home to Sydney and their young kids Holly (Isabelle Austin-Boyd) and Max (Otto Page) and can sense that something's wrong. Dave's acting secretive and Alice's sister Steph (Teresa Palmer, "Warm Bodies") is still in Southeast Asia where her boyfriend Jeremy (Antony Starr, Showtime's 'Banshee') has disappeared in "Wish You Were Here." Cowriter/director Kieran Darcy-Smith's feature debut is a twisty psychological thriller rooted in family drama that respects its audience. Little hints are dropped along the way, some suggested by cinematographer Jules O'Loughlin's ("Sanctum") framing and cutaways, but the film never feels contrived for a moment. Alice, concerned, nonetheless falls back into her routine, but Dave is clearly agitated, taking calls outside and checking the Cambodian Times for news. When Steph is forced to return home, Alice picks up her distraught sister and agrees to have her stay with them. Dave flips, insisting Steph stay with their mom. Alice thinks he's being irrational until the first secret is revealed - Dave and Steph had a drunken tryst on a Cambodian beach. Steph thinks perhaps Jeremy saw them. With a wedge already driven between them, the couple reports to Foreign Services clearly not on the same page. In fact, a flashback we've already seen reveals that Dave is lying on at least one seemingly small point. Darcy-Smith and Price keep escalating the tension and changing the dynamics among the three principals. Steph has been ostracized, until Dave relents, overcome by her grief, which in turn is misconstrued by his pregnant wife, who's begun drinking. But Alice might also have a hidden agenda, Dave suspicious of a car he's seen her stopping at and he doesn't even know about her visit to Jeremy's parents (and then there's that quick scene shown in the opening credit roll, Alice in conversation alone with Jeremy on the beach). So much more is going on, it's a credit to the filmmakers that they've packed it all into an 89 minute running time without losing clarity. The film's been beautifully shot and edited (by "The Great Gatsby's" Jason Ballantine). I must admit that one composition of Steph in a mirrored elevator had me convinced I knew the outcome, but I was over thinking. The filmmaker's truth is more logical (and horrific). Yet, they let us down a bit too softly, their need to ease tension after so much of it underselling their movie ever so slightly. But a thriller so complex and well made is hard to come by and this one's a crackerjack.

Actor-turned-director Kieran Darcy-Smith, with star and co-writer Felicity Price, brings an intriguing story to light. Right away, we learn that the two couples’ journey to Southeast Asia ended in a mystery when Jeremy turns up missing and without a trace. The story then flashes back and forth from the present, with Jeremy’s disappearance still unsolved, to before and during the aborted vacation. The writers weave an intricate story as, very slowly, the pieces of the puzzle fall together and reveal the shocking truth. This is not the kind of film you want described in any detail before you see it. The ongoing mystery over Jeremy’s disappearance should be played to a fresh pair of eyes. The twists the film takes are never indulgent or trite and the economy of production (the film runs under 90 minutes) makes the time fly by. The Australian cast and crew do a fine job in creating a gripping mystery. The film concentrates mainly on Dave and Alice and the aftermath of Jeremy’s going missing. There is more to the story than just the disappearance of one of the characters. There are secrets kept and secrets told and Darcy-Smith and company do a marvelous job weaving this tapestry of ambiguity and confrontation.